What is the LG PH450UG Minibeam projector?

A huge image in a small space – that’s you get with LG’s ultra short throw PH450UG Minibeam DLP LED projector.

Traditional projectors typically need space: a large room with a throw distance of two to three metres will earn you an image of 100-inches or more. Ultra short throw projectors are different. Positioned close to a wall – in some cases less than 30cm – you can achieve a picture measuring 50-inches plus across. Move the projector back a tad and the image grows exponentially.

At the risk of stating the obvious, you shouldn’t come to the PU450UG expecting the same clarity as a Full HD LED TV. It’s a somewhat different viewing experience, albeit bolstered by unique usability. 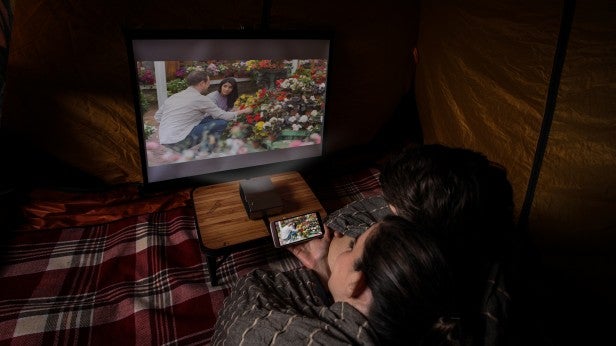 The PH450UG clearly doesn’t have a cookie-cutter design. It’s got a funky design, finished in futuristic grey, with air vents on each side. It can be used away from the mains, thanks to a built-in battery.

It won’t take up much table space, either. Measuring just W132 x H200 x D80.5mm and weighing 1.1kg, it isn’t much bigger than a George RR Martin paperback. Even so, LG’s LED beamer is rated at 450 ANSI lumens, with a contrast of 10,000:1. The LED light engine doesn’t run hot, but gently churns out mildly warm air. 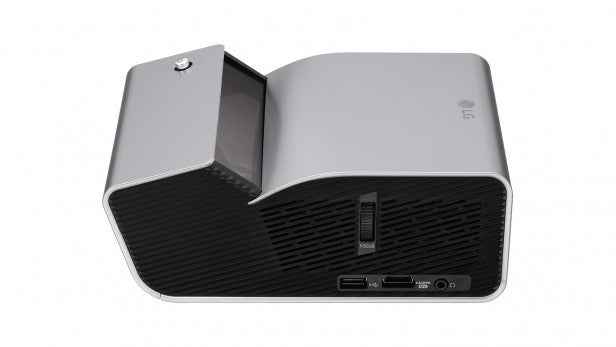 Connectivity comprises a single HDMI input, plus USB port and mini-headphone jack. Focus is managed manually, via a wheel above. The HDMI input is MHL-enabled for a direct smartphone connection.

Miraculously, LG has also found room for a sound system on board; specifically a pair of micro speakers, driven by a 2 x 1W digital amp. In truth, these sound awful. But since the Minibeam also has Bluetooth, it can be partnered with much better-sounding Bluetooth speakers, or Bluetooth headphones. 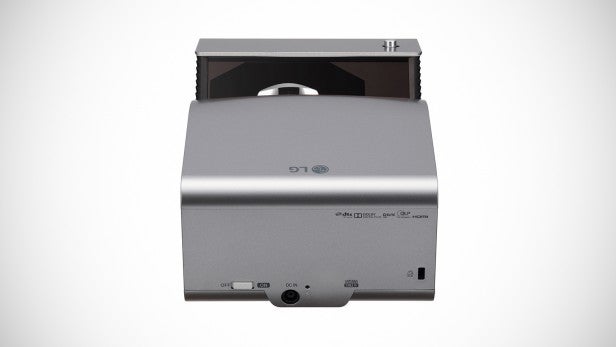 Setup takes minutes. While the projector can be used with a proper screen, it probably doesn’t warrant the extra expense or complication, unless you’re planning to use it on the patio to while away those balmy summer nights. Most people will just find a suitable white wall.

The PH450UG is compatible with the DLP 3D system, but glasses are an optional extra.

Fully charged, the Minibeam’s battery will last for around 2.5 hours, which is long enough for a decent Netflix binge and probably 50% of today’s blockbuster movies. Once depleted, the battery takes around three hours to charge.

The PH450UG is acceptably quiet. LED longevity is pegged at 30,000 hours, which is basically the lifetime of the product.

While most content will probably route in via the HDMI port (set-top box, disc player or streaming stick), the projector also has an integrated media player for USB drives. It had no problem with our oddball collection of file codecs and wrappers: AVI, MPEG, MKV, WMV and MOVs played without issue. 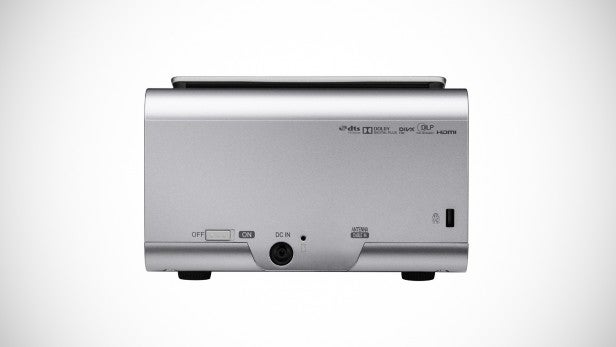 In addition to HDMI and USB sources, you can also mirror a compatible Android mobile, using Screen Share (which is found in the Input listing). Screen casting from a smartphone is a simple way to share JPEG stills.

While it is possible to mirror video apps as well, sound and vision is out of sync. Any idea that you might mirror your mobile for projected Netflix should be binned. If you want to use the projector on the move, the best option is probably to put video content onto a USB thumbdrive.

Images are bright and impactful, but lose zing the larger they get. Display size is determined by how far from the wall you sit the projector. 7.5cm equates to a 40-inch display, while 16cm is enough room to throw a 50-inch picture. This image size equates to peak vibrancy. 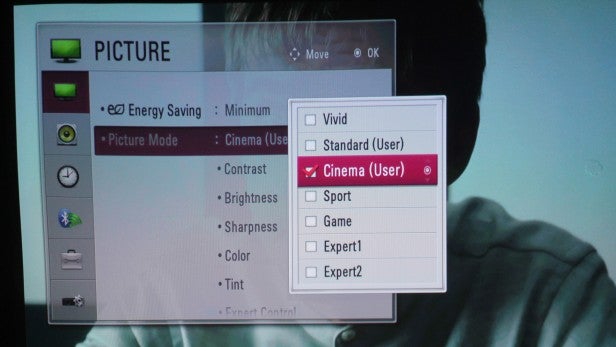 Want something more dramatic? Move the PH450UG back to 60cm and you’ll have a picture closer to 132 inches. Keep on shuffling and you’ll fill the whole wall.

Of course, there is a price to be paid. The pixel structure of the PH450UG’s 720p image becomes painfully obvious when you start to super-size your movies. It’s a question of balancing acceptable image deterioration with screen impact. Alternatively, you can spring for the PF1000U. This is a step-up 1080p LG ultra short throw model, but comes with a price tag twice as large.

The PH450UG’s tile-based user interface looks much like you’d see on an LG Blu-ray player, and there’s a surprisingly expansive range of display and control options, including a variety of image presets. Standard is the best all-rounder, but there’s also Vivid, Cinema, Sport, Game and two Expert (ISF) modes. 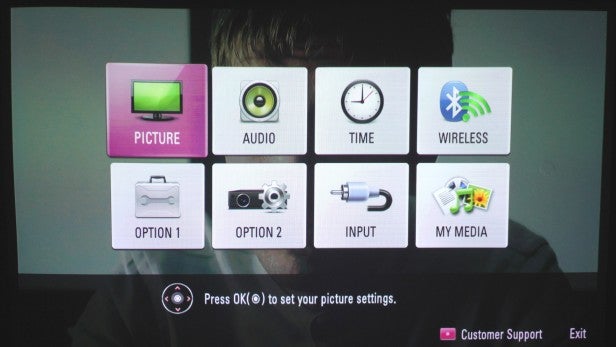 While detail is limited to 720p, colour vibrancy is high, which makes this a fine display for animation. Japanese anime The Tale of the Princess Kaguya, with its hand-drawn water-colour style, looks fabulous. Live action fare can seem a bit gritty.

Not surprisingly, this isn’t a projector suitable for use in rooms with high ambient light. It looks its best in full black-out conditions. 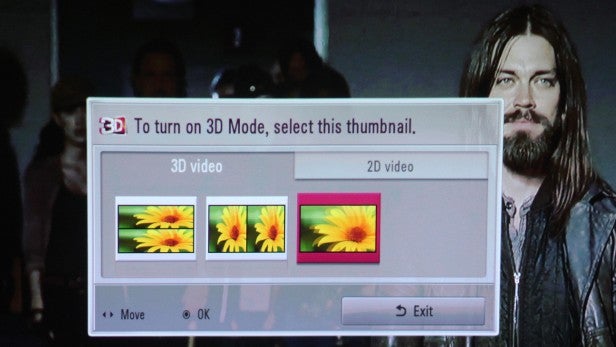 Thankfully, operational noise is low. The projector maintains a civilised tone, 23dB in Eco mode, rising to 30dB in full brightness. Any low-level whirr can easily be lost behind a Bluetooth sound system.

Should I buy the LG PH450UG Minibeam projector?

Not only is this ultra short throw projector easy to accommodate, but you no longer have to worry about casting a shadow by walking in front of the light – and it’s small enough to be carried about in a holdall.

Overall, we rate the LG PH450UG as a novel and entertaining display option. This 720p portable is no alternative to a real home cinema projector, but it’s better than many Pico projectors that have preceded it, and can cast big images in spaces and locations unsuitable for big TVs or conventional projectors.

We wouldn’t have any qualms about letting older kids enjoy the PH450UG in a bedroom or den. It’s also a fun choice for pop-up sports nights and gaming sessions.

The LG PH450UG is no replacement for a proper home cinema projector, but for on-a-whim movies nights, sport events and kids entertainment, it delivers big-screen fun at an excellent price.