LG is out to take the idea of interactive TV to a whole new level in the next four to six weeks when it launches its new ‘PenTouch’ TVs.

Also known as the PZ850T series, there will be two models: one 50in and one 60in. And as you might guess from the PenTouch name, their headline selling point is the way they let you write or draw directly onto the screen using special pens – two of which will be included with each TV.

Turning your TVs into effectively king-sized touch-screen tablets in this way isn’t totally new, of course; such screens have been around in the business and digital signage markets for some time. But so far as we can recall, no brand has previously tried to introduce such technology on a TV aimed at the domestic market. 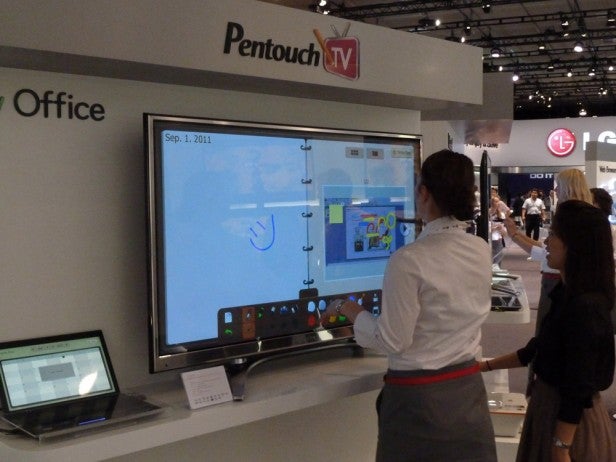 The way the system works is that you load provided software onto your PC, then insert an also-provided USB dongle into one of your PC slots. Then you’ll be able to doodle or write away to your heart’s content using the provided pens.

We gave it a go ourselves, starting off with a simple ‘drawing’ program. Notwithstanding our complete lack of drawing talent, we were actually quite impressed by how accurately the system responded to our pathetic artistic endeavours. There’s only a very minor sense of lag, and lines on the screen correspond decently accurately to the position of our pen.

Next we turned our attention to a calendar/note app, which allows you to handwrite notes to other family members or synchronise family calendars. Again, it’s a bit of fun that we could just about see people using in a normal household environment. 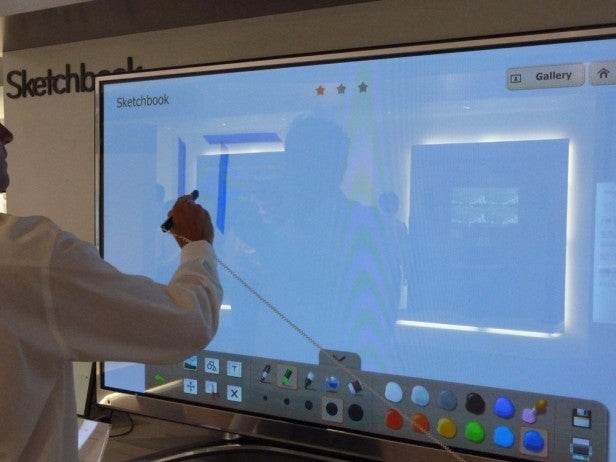 The inevitable Angry Birds was on hand, meanwhile, to show how being able to touch your TV screen can affect your gaming options. And perhaps best of all, we played with photo viewing software that let you swipe forward or back through your pictures, or expand them just by dragging two of your fingers out across the screen.

Turning to other features not connected to their ‘touchability’, the PZ850T models use plasma technology and carry active 3D playback (the filters applied to the screens of LG’s passive 3D TVs make PenTouch impossible). They’re also THX certified, and ship with a single pair of active shutter 3D glasses included. Which seems actually quite generous considering the 50in model will sell for a not unreasonable £1299 while the 60in goes for £1899.

While we sort of had fun with the PenTouch TVs, though, we can’t really imagine wanting to have one in our homes. First and most obviously, we just can’t imagine wanting to get off the sofa to wander over to our TV to start doing stuff on it rather than just using a laptop computer or iPad on our laps. If we like the idea of seeing the stuff we’re doing on our laptops appearing on our big TV screen, then we can just connect our laptops up to the screen and get the same results that PenTouch offers, more or less. 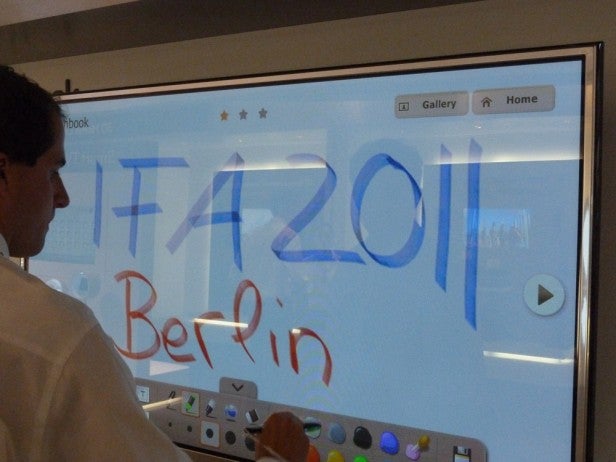 Another issue is the size of the screens on offer. For while PenTouch features in a domestic environment are most likely to appeal to youngish kids, such kids won’t be able to reach to point their pens at the upper reaches of such large TVs – especially as you’ll almost certainly have such a TV perched up on a bit of furniture.

It also feels just wrong for you or especially your kids to be standing up so close to such large TVs that you’re actually touching them. We’re sure there are no safety implications – LG has even developed a specially strong stand for the screens, to make them more or less ‘topple-proof’. But still, the whole idea of standing so close to such large screens in your living room just doesn’t feel right. Especially when we think how often we’ve shouted at our kids not to get so close to the TV!

The bottom line with the PenTouch TVs is that while we’re interested in the PZ850T models because they’re new 3D-capable plasma TVs, from our early hands on their PenTouch properties ultimately feel like a rather ill-advised solution to a problem that no longer exists.