We wanted to like the LG Optimus L7 P700, we really did. For just £215 SIM free it comes running the latest version of Android, has a big, bold 4.3inch colour screen and NFC support. On paper it sounds like a fab mid-range blower. However, it turns out to be a bit of a pig of a phone to use. Why? Well, there are a multitude reasons.

Design
Let’s start with the positives, though. The L7’s stylish design belies its mid-range pricing. Available in white or black – we had the white one in for review – it looks very classy, partly because it’s so slim – it measures a mere 8.7mm thick – but also because the glossy white bezel framing the screen blends nicely with the chrome band that runs around the outer edge of the phone. It’s quite angular, which some people won’t like, and the largish 4.3inch screen means it feels quite broad when you’re holding it in your hand. However, that’s the nature of these large screen handsets and the L7’s display runs almost to the edge of the phone, so we don’t really see how LG could have made it any narrower. 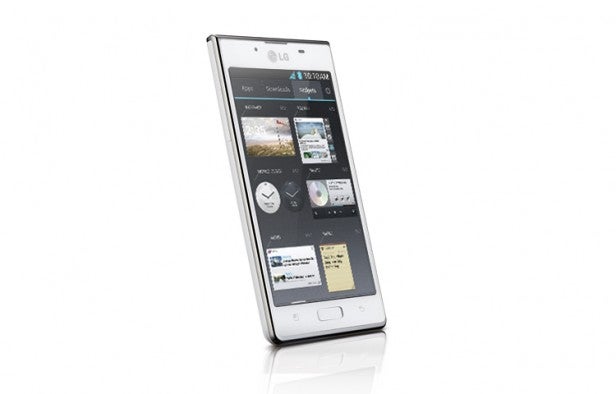 Like the cheaper Optimus L3, the battery cover on the rear of the phone has a textured pattern. It feels a bit like corrugated cardboard to the touch, which detracts slightly from the phone’s premium feel. However, it is very grippy and because the pattern is grooved, rather than dimpled, it doesn’t gather dust in the same way the rear of the L3 does.

Touch buttons
The button placement is good, too. The power/lock button sits at the top while the volume buttons have been placed on the left hand edge. Google may be pushing to rid Android of hardware buttons, but LG has still opted for a physical Home button beneath the screen. This sits between two touch buttons for the back and multi-tasking keys (even though the latter is used as an option key rather than a multifunction key, but that’s Android consistency for you). Naturally, there’s a standard headphone jack at the top and a microUSB port on the bottom. In fact, it’s the same layout as Samsung’s currently employing on its Galaxy handsets.

Prize off the battery cover – easier said than done as there’s no obvious groove to get your fingernail into – and you’ll find the microSD card slot easily accessible, so you don’t have to remove the battery to get at it. 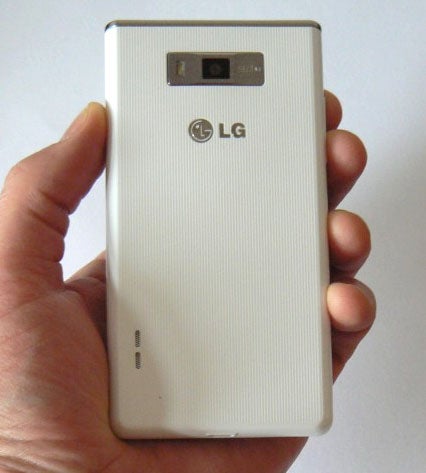 Ice Cream Sandwich
Unlike a lot of current mid-range Android phones, this one comes loaded with Android 4.0 – Ice Cream Sandwich (ICS) – so hats off to LG for that. However, the company couldn’t help itself from adding its own Optimus UI 2.0 skin over the top. And while the phone may run ICS, there are a few curious omissions. The face unlock feature that lets you unlock your handset by pointing the front facing camera at your boat race is missing, and it doesn’t let you resize homescreen widgets – one of ICS’s key new features.

However, you can press and hold the home button to bring up a list of all the apps than you’ve be using of late, complete with thumbnail images of each, so you can tap on one to instantly return to it. It also let’s you dismiss individual notifications just by swiping them off the screen and there’s a handy panoramic mode in the camera app, as well as some neat photo editing tools including an autofix option and some Lomo-style effects. Also, because the L7 has NFC you can transfer files to other NFC phones using the new the Beam feature by bumping them together. 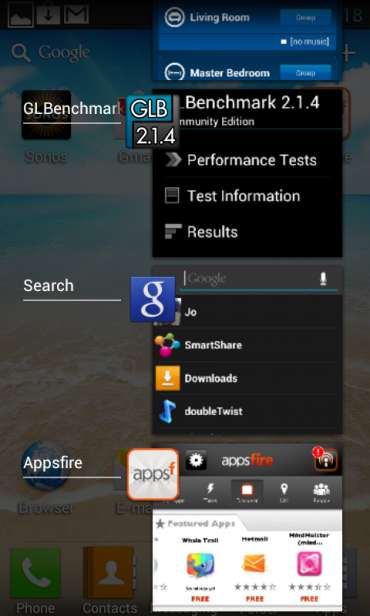 Thankfully LG’s Optimus UI doesn’t really change the look and feel of Android too much. There are five home screens to play with and as you swipe from one to the other the background wallpaper pans slightly and the shortcuts zoom out of view via a neat 3D effect. The bar at the bottom of the screen houses up to five apps shortcuts or folders and you can change these at will. The app drawer is also divided up into sections, with entries for apps, downloads and widgets. To access different pages you simply scroll horizontally.

The big issue with the LG Optimus L7 P700 is its performance. It’s difficult to tell if this is due to it’s modest 1Ghz processor, a lack of RAM, its implementation of ICS or LG’s Optimus UI. Either way, it can be infuriating to use as it often suffers from seemingly random slow downs and pauses.

Here’s an example. We start up the Gmail app and tap on the first email in the inbox to open it. From tapping to the email to the message appearing onscreen it took a staggering 6.5 seconds – count ’em! Granted this doesn’t happen all the time, but it does happen on a regular basis. In fact, there were times when we though the phone had actually crashed it took so long to respond to our input.

Another symptom is the sluggish feel of touchscreen interactions. Simple tasks, like dragging and dropping shortcuts on the homescreen,
become hugely annoying as the phone often registers a long press as a quick
dab. The result is that you end up launching the same app multiple times
before you get it to recognise that you’re actually trying to just move
the shortcut to a different place on the homescreen. 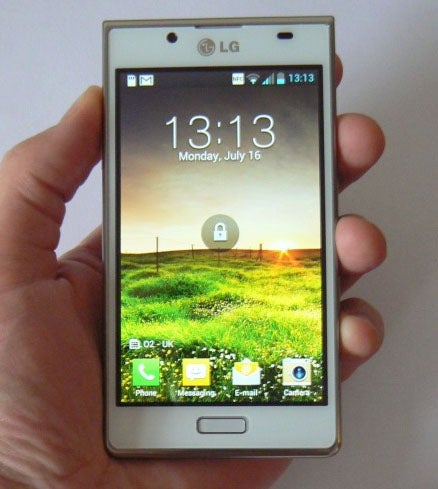 Its sluggishness was highlighted in our benchmark tests too. In Sunspider it scored a measly 3793, while in Browsermark it racked up a score of just 53372 – not much better than the budget Optimus L3. 3D gaming isn’t really its forte either, as it managed to produce just 20fps in the GLbenchmark 2.1 Egypt standard test.

Big Screened Fun
The 4.3inch LCD screen may not have the deep black levels of the OLED displays on some other phones, but the combination of its large size and generous resolution of 480 x 800 pixels means that it looks quite impressive, especially compared to the displays on other similarly priced phones. 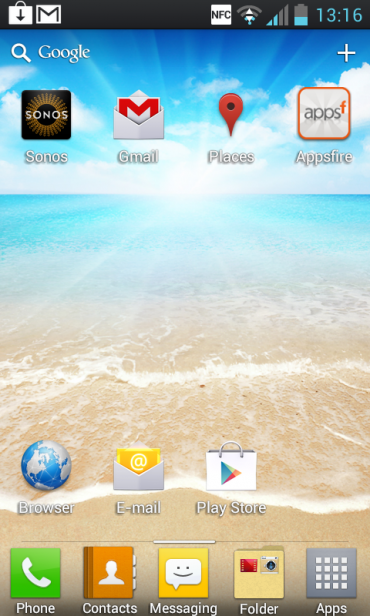 Battery Life
However, battery life was pretty dire too. It really struggled to get though a whole day of fairly moderate use without needing a recharge in the evening. By modern smartphone standards that’s a very poor showing. On the plus side, call quality was fine. I had no problems hearing people through the ear piece and callers reported that voice quality from the mic was good.

The phone also has NFC built-in, and LG includes a number of NFC tags in the box. You can set the phone up so that these tags cause the phone to switch to a specific profile. For example, you could put a tag on your beside so when the phone is sitting on the table it would automatically switch to a profile that turns off all notification sounds, so as not to disturb you while you sleep, which is neat. And you can of course use the technology for much more besides, like contactless payment, or quickly connecting to other wireless devices. 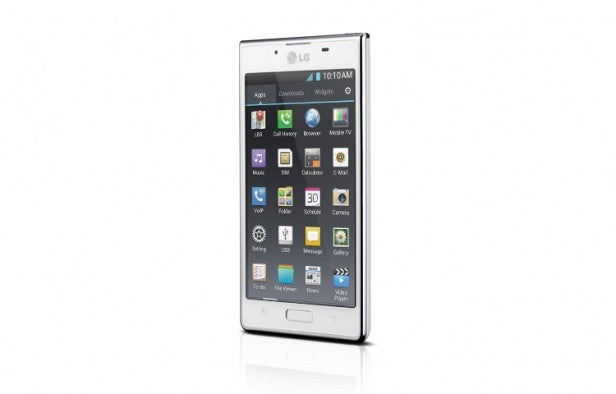 Camera
The camera is fairly decent too. There are both front and rear facing cameras and the rear facing one has a 5.0megapixel sensor. Shutter lag is low, so you can take a snap fairly rapidly. However, once the shot is taken the handset does pause for quite a while to process it before you can shoot another. Nevertheless, it does a good job of producing an even exposure across the frame, detail levels are good and colours quite accurate too. Naturally you can use the camera to shoot video, but this is limited to a maximum resolution of 640 x 480, so you can forget about shooting in HD quality.

Verdict
The LG Optimus L7 has a stylish design and some good features including NFC support and a large 4.3inch screen. However, its 1Ghz processor seems to be overwhelmed by what LG is asking it to do on this handset and the result is that the phone can be quite tedious to use, as it suffers from lots of random slow downs and pauses. Our advice is to look elsewhere to satisfy your Android craving. 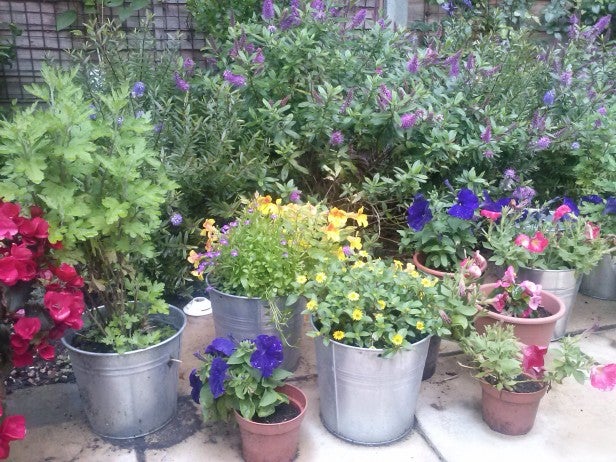 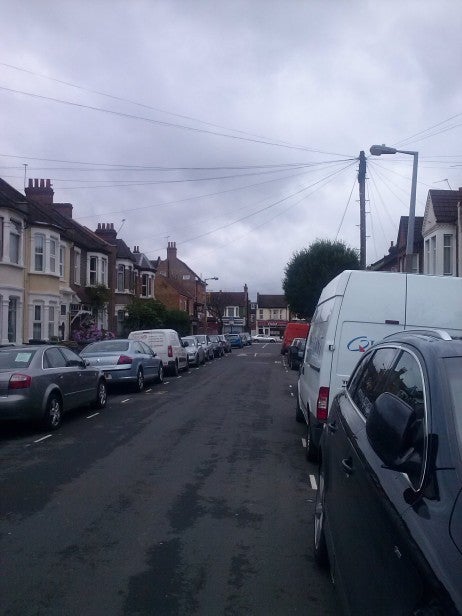 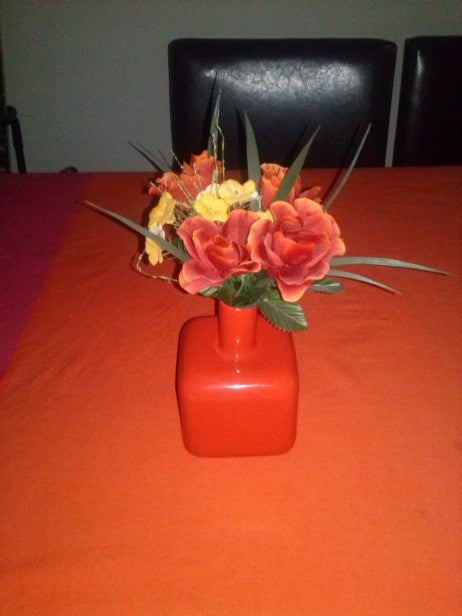