The 2019 LG OLED65E9 follows on from a slightly disappointing 2018 E8 model. The issue for the E8 was that in delivering a sleeker design by radically reworking its speaker system, it lost a fair chunk of the sound quality that made earlier E-series OLED generations special. This wasn’t ideal given that one of the main reasons to spend (much) more on an E-series TV rather than LG’s C-series unit is their supposedly much better sound quality.

LG appears to have listened to its critics, though. On the basis of what I’ve heard at CES, the OLED65E9 is shaping up to not only be much better than the E8, but one of the best-sounding TVs ever.

However, before we get into the audio experience, I should point out that I’m not going to cover the E9’s picture performance here, for the simple reason that it’s essentially identical to that already discussed in our first look at the new LG C9 models.

One area besides its sound where the E9 does differ from the C9 is its design. And the difference in this respect is more pronounced this year, thanks to the E9 looking actually more pretty than the E8, despite its speakers being slightly larger. The way the TV appears to rest solely on a wafer of glass along its bottom edge is particularly cool. 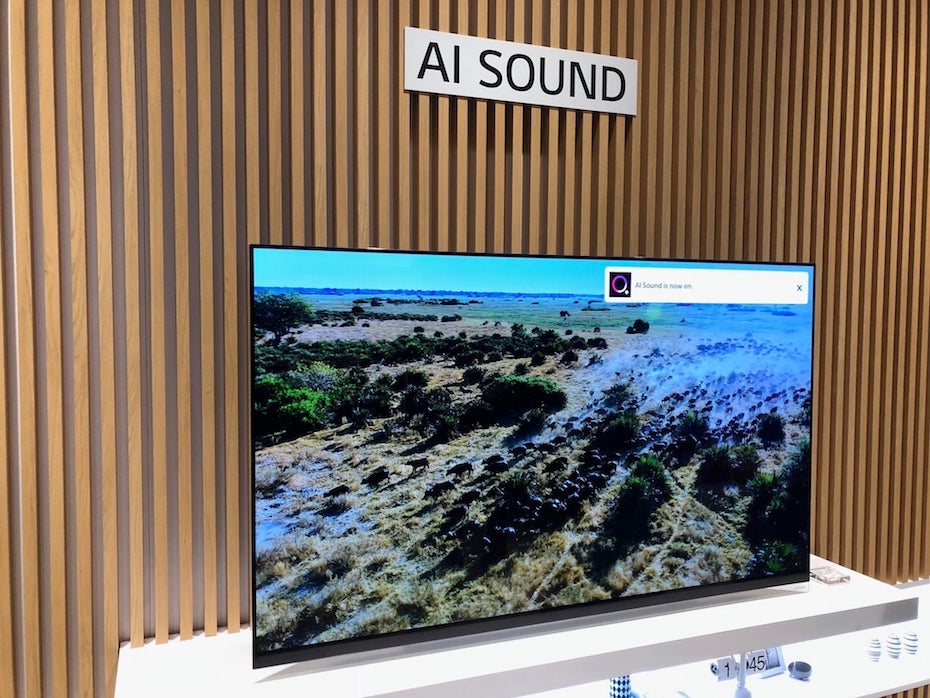 But it’s on feeding a movie soundtrack into the E9 that the prospect of coughing up significantly more for one than you’ll likely need for the C9 starts to make absolute sense. Especially if you use LG’s new AI sound mode, which seems to play at least as important a role in improving the sound as the larger, more powerful speakers.

To underline just how good LG’s new AI sound mode is, it absolutely killed the E9’s Dolby Atmos mode during our preview, leaving the Dolby format sounding thin and lifeless by comparison. The scale of the sound it creates, the extent to which it projected the soundstage far clear of the TV’s bodywork, was on a whole other level to the more cramped, confined experience of the Dolby Atmos mode. And yes, the AI setting also delivers a palpable – actually superior – sense of height in its sound portrayal.

I’m not saying here that the Dolby Atmos performance of the E9 is poor, by the way. It’s just that the Dolby Atmos processing isn’t as optimised for the particular capabilities of the E9 as LG’s own audio processing. I guess it makes sense that the manufacturer of a TV should know more about how to optimise its performance than a third-party organisation, but the extent to which LG has highlighted this fact is outstanding. 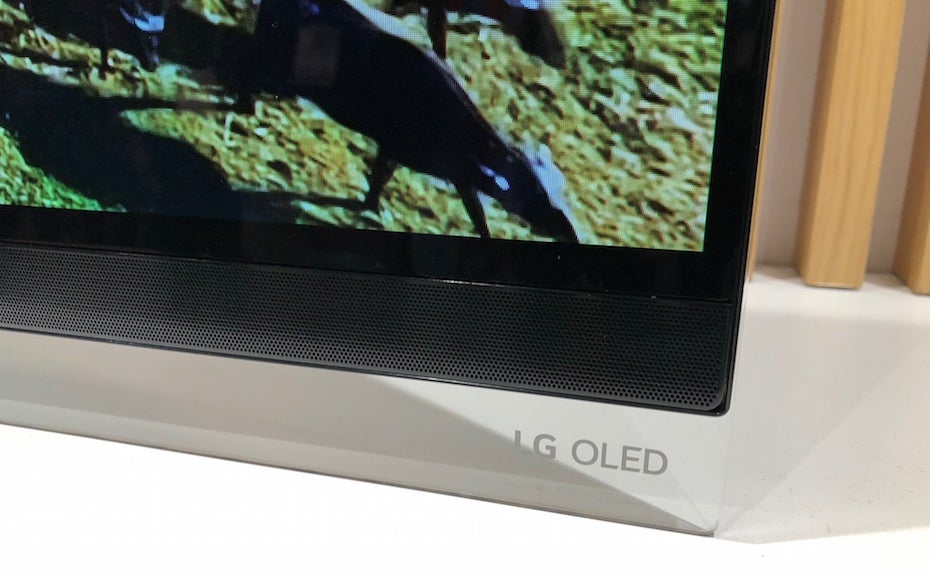 The OLED65E9 seems to sit on an impossibly thin sheet of glass.

The E9’s audio prowess isn’t just about its AI processing, though. LG has clearly improved the physical capabilities of the set’s speakers versus the 2018 E8, despite the speakers only looking slightly bigger than before.

No longer is there any phutting or “falling away” of the bass line during action sequences. No longer do voices sound slightly detached from the rest of the mix. And, best of all, no longer does the sound shrivel up rather than expanding outwards when it takes on a potent action scene.

On the contrary, the E9’s sound relishes the challenge of shifting through a few gears as a movie builds up to a crescendo, with your ears now being much more likely to surrender before the TV’s speakers do.

One final impressive talent of the E9’s completely revamped audio system is its ability to turn mere stereo content into startlingly good virtual surround. The sheer scale and dynamic range of the AI sound up-conversion has to be heard to be believed. And, moreover, this is achieved without the resulting audio sounding brittle, harsh or hissy.

Although LG probably didn’t feel it at the time, it might just be that the issues with the E8’s sound were a blessing in disguise. For the extent to which the E9 reacts to the criticisms of its predecessor means that this time round we seem to have an E-series model that has no problem at all in justifying its premium position in LG’s OLED range.