LG makes a big deal out of the fact that all of its OLED TVs for 2017, from the flag-waving W7s to the entry-level B7s, use essentially the same picture technology. So I guess I shouldn’t be surprised that the OLED65E7V gives you pictures at least as good as those of the previously tested OLED65W7V, despite costing £3,000 less.

As you’d expect with OLED, it’s the OLED65E7V’s contrast that most impresses. Provided you’ve not gone crazy with its brightness setting, it delivers stunningly inky, deep, rich, natural black colours that surpass those of any previous LG OLED generation on two levels. 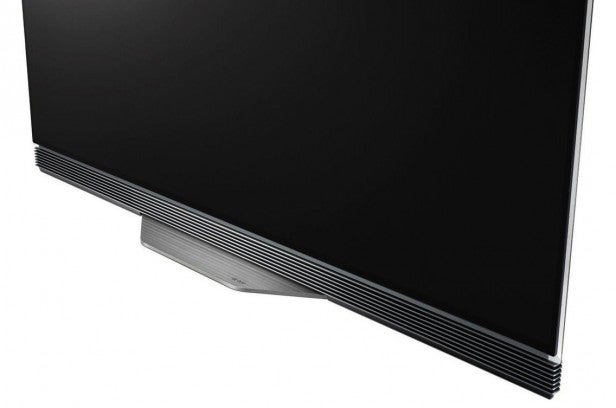 First, they’re more neutral in tone, avoiding the slight purple tinge evident – particularly in bright room settings – with 2016’s LG OLEDs. Second, they benefit from a marked improvement in the handling of the technically difficult transition from complete black (where an OLED pixel is essentially switched off) to just above black.

The OLED65E7V achieves much more subtle steps of brightness in very dark areas, leading to more shadow detail and much fewer of the ‘hollow’ dark areas that tended to crop up with HDR footage on 2016’s OLEDs.

While the OLED65E7V does a mouthwatering job of reminding us that HDR is about deeper blacks as well as brighter brights, it also does a much better job of delivering more impact from HDR’s extra brightness than last year’s OLEDs.

That’s because it reaches a peak brightness of 800 nits, up from 650 nits on last year’s models, and it’s the difference between a genuine HDR experience and the halfway house of last year. It’s a crucial upgrade.

There are, of course, LCD TVs out there that can go much brighter – more than twice as bright in some cases. However, while the best LCD TVs can deliver more jaw-dropping brightness with predominantly light HDR shots, as well as more explosive peaks during predominantly dark HDR scenes, they also suffer to varying degrees with halos or bands of light around stand-out bright HDR elements. These backlight control issues are distracting and can actually reduce the sense of intensity in areas where bright HDR elements sit against dark surroundings. 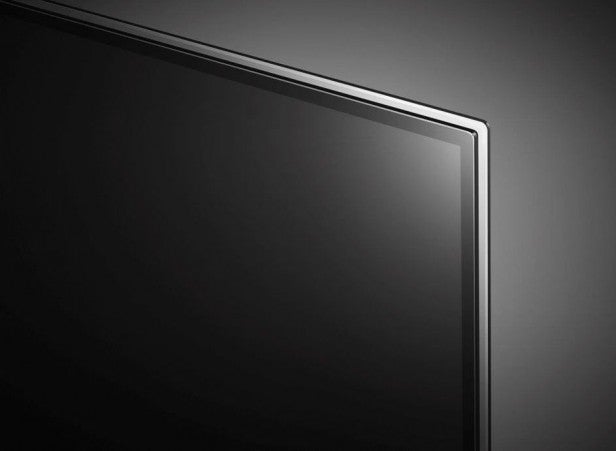 By comparison, the way the E7’s self-emitting pixels can put the brightest parts of an HDR image literally a single pixel away from the darkest parts creates an almost luminous effect that’s as beautiful as it is natural.

There’s some interesting stuff going on with colours, too. While  the E7 still doesn’t have enough brightness to deliver nearly as much colour volume (what you get when brightness is applied to colour) as the latest high-end LCD TVs, strangely its colours sometimes, at least, actually look richer than they do on LCD TVs. Especially during shots that contain a mix of dark and bright elements.

This could be down again, I suspect, to the way OLED doesn’t have to ‘share’ backlighting across multiple pixels.

The OLED65E7’s OLED technology also scores over LCD with its viewing angles. You can watch it from a far greater angle than any LCD TV before there’s any serious drop off in colour saturation or contrast.

LG has apparently been working hard to improve its handling of HDR10 content from 2016, too. Particularly pleasing is the way the brightest parts of HDR pictures look much less bleached of detail (‘clipped’) than they did last year. Dolby Vision HDR content still delivers a superior performance – colours look richer and more nuanced, dark and bright extremes look more detailed, and the picture just looks more balanced and immersive. But LG’s HDR10 efforts have certainly closed the gap on Dolby Vision. 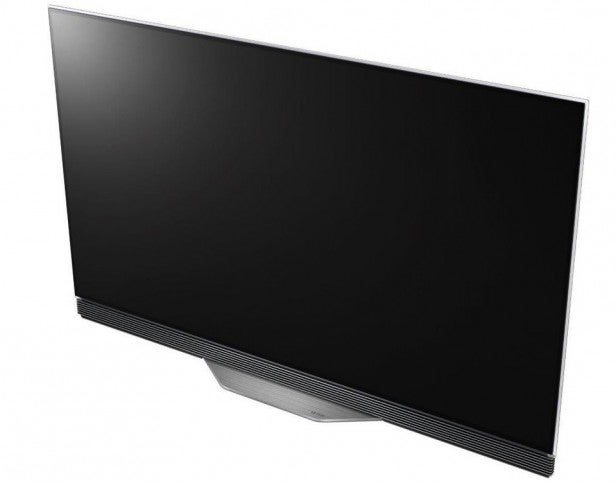 Gamers, meanwhile, will be elated to learn that the OLED65E7V neatly sidesteps the input lag issues which (initially, anyway) plagued LG’s 2016 TVs. It takes less than 25ms to produce its pictures in both its standard dynamic range and HDR Game modes.

Finally, with HDR content still in fairly short supply, it’s great to report that the OLED65E7V’s standard dynamic range performance picks up where last year’s models left off in 2016, serving up arguably the most all-round gorgeous SDR pictures I’ve ever seen.

For all their many glories, the OLED65E7V’s pictures aren’t immaculate. I’ve already hinted that pushing for more brightness to go with the class-leading blacks wouldn’t hurt OLED’s HDR credentials, helping it reach the sort of colour volumes we’re increasingly going to be looking for in the HDR age. More brightness would also help OLED’s pictures retain an HDR feel even in fairly bright rooms – something Samsung’s QE65Q9F excels at.

With this in mind, it’s a bit frustrating that ongoing noise issues at higher brightness levels prevent you from driving the LG as brightly with HDR as you might ideally like.

LG’s new Active HDR feature, which uses processing to create an extra layer of dynamic metadata to improve the handling of HDR10, falls rather flat thanks to the way it clips bright areas more than the OLED65E7V’s standard HDR10 management.

Next, while LG has improved its HD-to-4K upscaling this year, it still falls a little short in terms of detail and sharpness to the best efforts of Samsung and, especially, Sony. Finally, skin tones have a habit of looking a bit plasticky (due to a shortage of colour tone subtlety) during relatively dark scenes.

It’s clear from this niggle list that there’s still plenty for LG to toil away at with future OLED TV generations. This doesn’t change the fact that the improvements delivered by a carefully set up OLED65E7V already present movie fans with some of the most beautiful and certainly the most consistently immersive pictures the TV world has delivered to date. 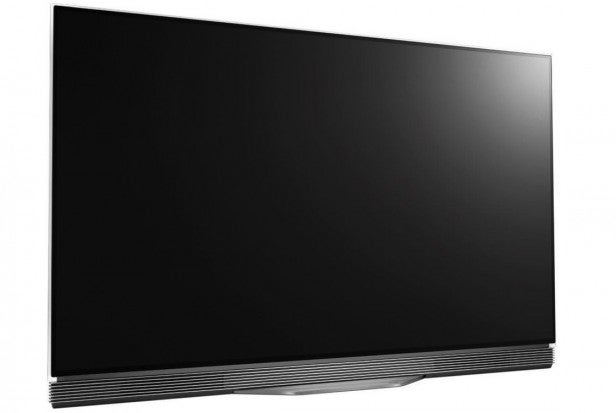 Joining the frequently jaw-dropping pictures is a surprisingly effective audio performance from the OLED65E7V’s integrated soundbar.

It manages to produce a soundstage that stretches (vertically as well as horizontally) far beyond the physical confines of the TV’s bodywork without starting to sound disjointed or thin. On the contrary, there’s enough bass thump at the lower end of the audio spectrum and treble detailing at the other to deliver a really dynamic, open sound that actually sounds pretty good with music as well as adding genuinely cinematic impact to movies.

To some extent the Dolby Atmos promises need to be taken with a pinch of salt; there’s no real sense of sound coming from behind you or above you as there should be with a true Atmos experience. However, the speaker system does somehow create not just a sense of verticality in the soundstage, but also some genuine height effect placement within that sound ‘wall’. This makes it all the more unfortunate that the OLED65E7V can’t parse Atmos audio delivered from Ultra HD Blu-ray. 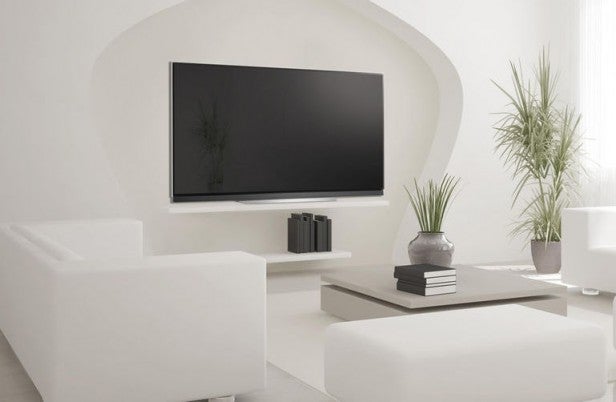 If you’ve got £5,000 burning a hole in your pocket, the OLED65E7V is about as awesome a way to spend it as I can think of. The improvements LG has delivered to its OLED technology for 2017 have taken it from very good to great, especially for movie fans looking for a TV capable of delivering immersive pictures in a dark, ‘home theatre’ environment.

The Samsung QE65Q9F is the most direct competitor, costing roughly the same and using QLED technology to deliver a much brighter picture with more colour ‘volume’. Its edge LED backlighting struggles versus the OLED65E7V where black levels, backlight uniformity and viewing angles are concerned, though.

Aside from the Samsung, the OLED65E7V’s closest rivals will likely be LG’s own C7 and B7 OLEDs (which may offer very similar picture quality for much less money), Sony’s debut A1 OLED TVs, and the recently reduced in price Sony 65ZD9.

I guess there have to be doubts over how many people will choose to pay £5k for the OLED65E7V’s admittedly stunning design and soundbar audio when LG’s C7V and B7V OLED sets promise to give similar picture quality for much less. One thing that’s certainly not in doubt, though, is that the OLED65E7V is seldom less than an absolute joy to behold.