I’ve long been a fan of the way LG’s passive 3D solution works on Ultra HD TVs, and the OLED55C6V does nothing to dent my enthusiasm.

There’s none of the tiring, distracting flickering often seen with active 3D TVs, and while 3D images aren’t completely free of cross-talk ghosting, there’s far less of it than you tend to get with active 3D solutions.

Detail levels are decently high with 3D, too, while the OLED55C6V’s spectacular colour and contrast performance helps the TV to delineate a profound and believable sense of 3D scale.

The OLED55C6V sounds slightly better than you might have expected given its super-skinny design – but that’s not to say that it’s much better than average by the standards of the LCD TV world at large.

Its best audio qualities are the surprising width of the soundstage, some reasonably clear and convincing vocal handling, and a solid amount of treble detailing.

On the downside, bass is limited and can succumb to a distinct thumping effect under pressure; the set can’t go particularly loud; and at high volumes those treble details can begin to sound painful on the ear.

As usual with premium LG TVs over the past few years, the OLED55C6V ships with a “Magic Motion Remote” that lets you control the TV just by pointing at the right part of the screen and pressing select. Others have tried to achieve the same thing, but for me, LG’s take on the technology is by far the most intuitive.

If you fancy finding out how good your video game collection can look on an OLED TV then there’s more good news. Measurements of the OLED55C6V’s input lag – the time it takes the TV to render image data received at its inputs – put it at just over 30ms on average. This is pretty much as good as it gets for UHD TVs currently, and shouldn’t have a major negative impact on your performance in twitch-response games. 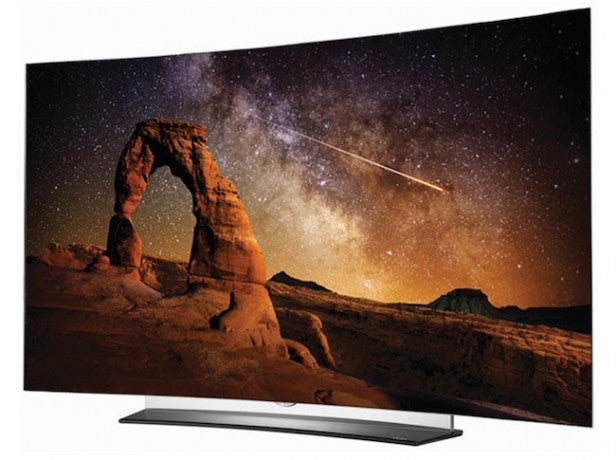 So long as you don’t mind its curved screen and can stretch to its £3k asking price, the OLED55C6V simply has to be on your list. It isn’t quite perfect, despite all the improvements on last year’s OLED efforts, and the best LCD TVs – such as the Samsung UE55KS9000 and Sony 75XD9405 – continue to hold an advantage when it comes to delivering the brightness attributes of HDR.

However, when it comes to dark SDR scenes and especially HDR, the OLED55C6V makes OLED’s advantages look even more emphatic than they were before. In doing so, this TV delivers the more consistently immersive viewing experience that many AV enthusiasts crave.

Some sporadic noise in dark scenes and detail clipping in bright picture areas mean that the OLED55C6V isn’t the perfect TV. That said, it delivers huge improvements over LG’s previous OLED efforts, with pictures that look nothing short of mesmerising for the vast majority of the time.