Hands-on with the LG OLED55C6 TV

LG sure is making us wait for its 2016 OLED TV range. We’ve been itching to get our hands on one of these new sets ever since they blew us away at the Consumer Electronics Show (CES) in Las Vegas in January, but still nothing has arrived on our test benches.

However, we have managed to get some time with a demonstration unit of what may be the most attractive model in LG’s new OLED range: the OLED55C6. It’s similar in picture specification to the B6 series, except that it has a curved screen, and supports 3D while the B6 models don’t.

This 55-inch model belongs to the most affordable 4K series in the new OLED range, and is scheduled to ship with a price of £2,999. While the OLED55C6 lacks the spectacular design and audio solutions of LG’s new top-end OLED models, it boasts essentially all of the picture quality credentials of its much more expensive E6 and G6 siblings.

The OLED55C6’s design isn’t on the same level as the “pixels on glass” effect offered by the “Signature” G6 OLED TVs. However, it’s hardly had a run in with the ugly stick.

It’s almost unfeasibly thin in terms of both its bezel thickness and its rear depth, while the use of a transparent “neck” attachment to the unobtrusive silver pedestal mount really does make the screen look like it’s floating. In other words, it makes even the thinnest LCD TV look old-fashioned and chubby.

The curved screen won’t suit everyone, but it does contribute something extra to the TV’s dazzling looks.

The only immediate concern design-wise is the absence of any large speakers of the sort attached to LG’s new G6 and E6 models, which raises questions over whether such a slim chassis can deliver even half-decent sound. Sadly, I wasn’t able to gain a realistic sense of the OLDE55C6’s audio performance in the surroundings in which the preview took place.

However, the set still boasts a four-channel, 40W speaker system designed by Harman Kardon. Also, I suspect there are a great many people out there with soundbars, soundbases or surround-sound systems, who won’t care that this OLED TV doesn’t include an expensive integrated audio solution they’re unlikely to use.

The OLED55C6 does comes with the latest version of LG’s webOS smart TV engine, complete with the latest Netflix and Amazon streaming apps, and supporting both the 4K and HDR features those services now offer. 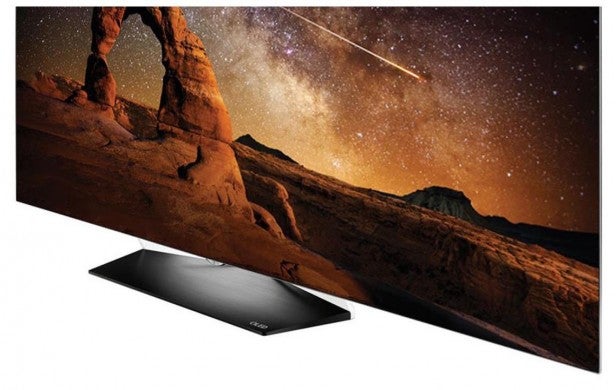 The OLED55C6 also benefits from the Freeview Play catch-up service LG is introducing this year to ensure it offers on-demand support for the “big four” UK terrestrial broadcasters.

Also key for 2016 is the OLED55C6’s support for both a native 4K resolution and HDR (high dynamic range) playback. In fact, as well as the open HDR 10 standard, the OLED55C6 supports the Dolby Vision HDR standard, too, which adds dynamic metadata to the HDR video feeds to continually optimise playback for the specific TV hardware you’re using. LG is currently the only brand supporting Dolby Vision in the UK.

Best of all, this TV’s OLED-driven picture performance should be almost identical to that of LG’s new flagship OLED models, sailing past the specifications demanded by the Ultra HD Alliance’s “Ultra HD Premium” badge of honour. Particularly striking are LG’s claims that its OLED screens are capable of delivering 99% of the DCI-P3 colour spectrum referenced by the Ultra HD Premium standard. That’s more than any other consumer screen I’ve come across so far.

During my preview of the OLED55C6, I was able to experience its performance with Dolby Vision 4K HDR feeds of Pan and Jupiter Ascending. It’s fair to say that the resulting pictures looked mesmerising.

The most surprising strength of the OLED55C6’s pictures during the preview was their brightness. LG’s rivals like to say that only LCD can deliver the sort of brightness peaks that HDR content requires, yet the OLED55C6 delivered Pan’s occasionally strong light peaks with superb punch and intensity.

An LG spokesperson suggested that the latest LG OLED TVs are actually capable of hitting localised brightness peaks much higher – potentially up to 800 nits – than the 540 nits LG generally claims for its new OLED screens. This claim does seem borne out by the beautifully luminous look to the OLED55C6’s HDR highlights. 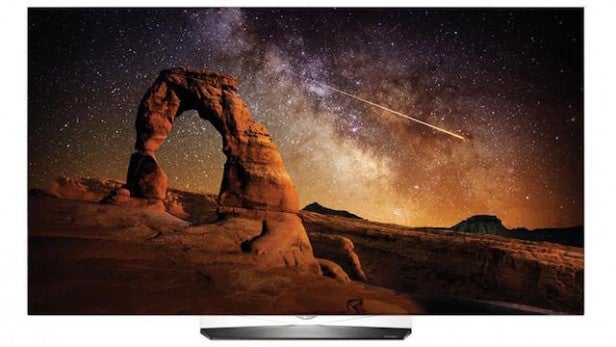 Since this TV’s OLED technology lets each pixel produce its own light, bright peaks remain gorgeously locked to precisely the areas of the image where they’re supposed to appear. There’s no backlight haloing or banding around very bright HDR objects of the sort seen in the latest crop of HDR-capable LCD TVs.

In addition, the OLED55C6 displays a truly profound depth to its black colours. Black-level prowess has always been a strength of OLED tech, but its importance reaches new heights in the HDR age, where the ability to plum the darkest end of the light spectrum is every bit as important as being able to push for high levels of peak brightness.

Just as important to the OLED55C6’s impact with the Dolby Vision HDR test footage is its colour handling. It isn’t quite as explosive as that of the incredible G6 models I’ve previewed before, but it’s spectacular enough to leave you in no doubt that you’re experiencing the majesty of the wider colour gamuts that accompany all mainstream HDR sources.

It also seemed to me that, with native 4K footage and some upscaled Blu-ray feeds, the OLED55C6 looked slightly crisper and cleaner than LG’s 2015 OLED TVs. Dark scenes suggested that the OLED55C6 suffers far less, if at all, with the light level “banding” inconsistencies spotted with some material on 2015’s OLED models.

While there were a few instances in the HDR demo footage where momentary loss of OLED’s customary black level prowess could be seen, LG claims to have greatly reduced the likelihood of this phenomenon compared with its 2015’s models. Hopefully, longer-term use of a finished reviewable model will bear this out.

In fact, if long-term viewing does prove that LG has significantly improved the flaws of its 2015 OLED TVs, then 2016 has every chance of becoming “the year of OLED” – especially given the difficulties so many 2016 LCD TVs are having with HDR.

Watch this space for a full review soon.