While we wait for LG’s curious cubiod ND8520 iPod dock to make an appearance, the company is filling the gap with this entry level model. The LG ND4520 is a compact dock that’s a little unusual in that it works with iPads as well as iPhones and iPods. It also has Bluetooth onboard so it can be used with other phones and MP3 players that support Bluetooth A2DP music streaming. Priced at around £130, it’s designed to be affordable rather than to battle it out with higher-end docks, so it lacks some more advanced features such as AirPlay support.

The LG ND4520 certainly looks a bit different to the average dock. There are two distinct sections to the design. The base of the unit is essentially one large rectangular box covered by a grey metal grill. Cut into this there’s another rectangular box, but this is finished in gloss black and sits upright, albeit at a slight rear-ward angle. It also overhangs the side by a couple of centimeters. On the right hand side there’s a volume control, power button and a function selector used to switch between the different input modes — an LED indicator on the right shows the currently selected mode. 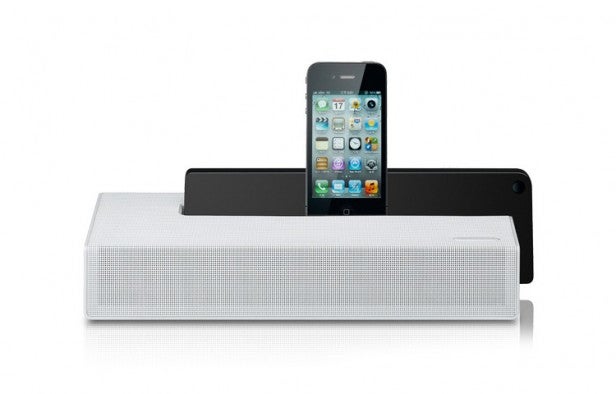 The docking connector sits in the middle of a groove that runs through the centre of the LG ND4520. Unlike most docks this one doesn’t use inserts to hold your iPhone or iPod in place. Instead the dock connector is mounted on a spring-loaded pivot so it simply moves in and out to accommodate different-sized devices. These are then supported at the rear by a thin rubber strip. As you would expect, the ND4520 charges iPhones, iPads and iPods when they’re sitting in the cradle.

The dock doesn’t just work with iOS devices, however. It can also be used with a range of other smartphones and portable players. On the rear you’ll find a standard 3.5mm input jack to let you feed audio from any external device into the dock. Next to this there’s a USB port for playing back music files stored on memory keys.

Of course the other way to play music through the dock is to use Bluetooth streaming. Setting the ND4520 up to work with Bluetooth really couldn’t be more straight forward. We tried it with a Windows Phone 7 handset and all we had to do was select the Bluetooth input mode on the dock, turn on Bluetooth on the phone and then select the ND4520 when the phone’s
Bluetooth scan picked it up. You don’t even have to enter a Bluetooth passcode to get the two communicating. 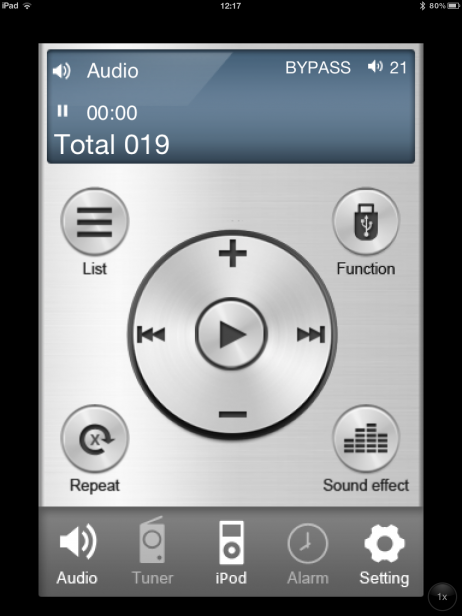 Using the USB port on the rear is a little bit more complicated. The dock doesn’t have a screen – only a mode indicator light – so it simply starts playing the first track on any USB key and continues from there. However, you can download the LG Bluetooth Remote app from the Apple App Store or Android Play for free and this actually communicates with the dock to shows you a full track listing of what’s held on the USB drive. It also allows you to switch between EQ modes such as Pop, Rock and Jazz, and control playback via simple transport controls.

The LG ND4520 has a pretty standard stereo speaker set up, each speaker rated at just five watts each giving a maximum output power of 10watts. That’s not massively powerful, so if you’re in the habit of having dubstep parties around your gaff, this is not the dock to choose.

To be fair, that’s not market that this little fella is aimed at. Instead it’s more likely to be used in modest sized front rooms, or secondary rooms such as a kitchen, study or bedroom. The ND4520 does have enough grunt to fill this more smaller sized rooms, although not exactly at ear-bashing levels of sound. The main problem with the dock’s lack of power, though, is that once your go pass about half way on the volume level, significant amounts of distortion start to creep in, especially on bassy dance or reggae tracks. 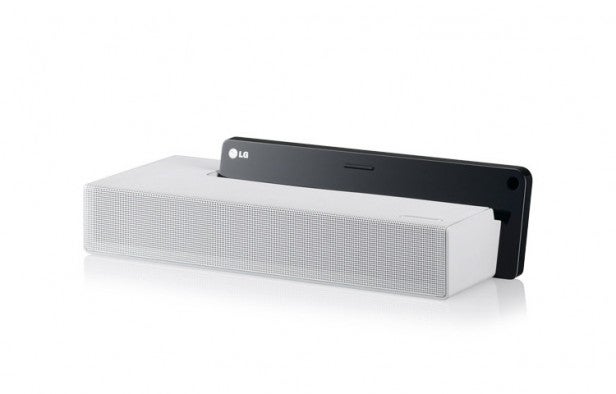 LG has angled the ND4520’s speakers upwards at the front of the chassis in an attempt to get the dock to spread the sound a bit wider, but it isn’t massively successful. Like the vast majority of smaller docks that we’ve had in for review, the close probity of the two speaker drivers mean that the soundstage remains quite narrow with little in the way of stereo separation.

Nevertheless, at volume levels up to around the half way mark the dock produces acceptable levels of bass for a model of its size. Also, it has good presence in the mid-range, so vocals can sound quite airy by the standards of docks in its price range. 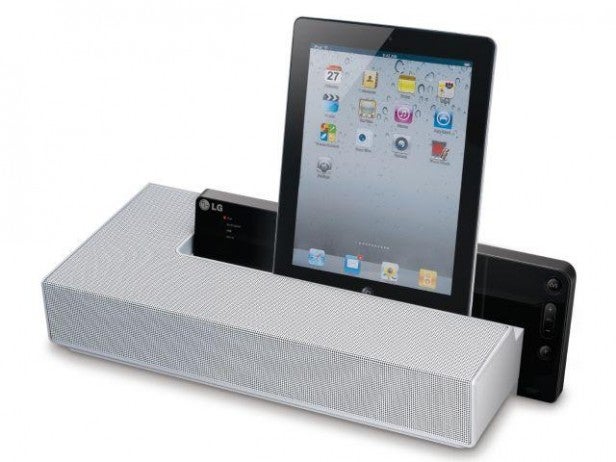 Perhaps the most interesting feature of the LG ND4520 is that it works with iPads. Naturally, as the connector is at the bottom of the iPad it needs to be stood vertically in the dock if you want to actually use the dock connector. There is enough room to have the iPad sitting horizontally in the groove by the docking connector and you can then feed audio to the dock via Bluetooth.

However, when we tried this for movie watching the delay in Bluetooth transmission was just enough to put the audio slightly out of sync with the pictures. We found the best option when using it to watch movies was to use a lead to connect the headphone jack on the iPad to the mini jack input on the rear of the dock. It’s a bit untidy and inelegant, but it works fine.

Verdict
The LG ND4520 is a neat, compact dock with a design that is pleasingly different to that of most of its peers. It’s handy that it has Bluetooth support and we also like the fact that it can be used with an iPad. However, although decent for a dock of its size, it’s by no means a standard bearer in terms of audio quality and we can’t help feeling that it could have done with a bit of extra poke in the volume department.