The NB5540 pairs a super-slim soundbar with a wireless subwoofer to deliver the sort of loud, powerful sound that your flatscreen TV can only dream of, while freeing you from the cables and clutter that come with a traditional 5.1 home cinema system.

It’s LG’s top-end soundbar, providing a step-up from the NB3540 and NB4540 – both of which impressed with their design and features but left us feeling flat in terms of sound quality. Here’s hoping the NB5540’s higher price tag will inspire a better performance.

The NB5540 is one of the best-looking soundbars on the market. It injects pizzazz into its design with a sumptuous metallic finish and curved back end, while the brushed top panel and reflective silver trim at both ends are classy touches. Ported, tear-shaped side panels help spread sound into the room. 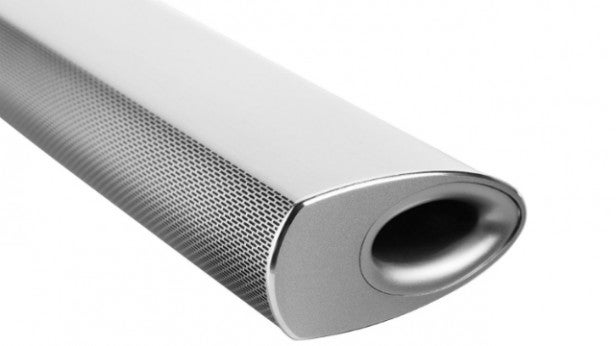 An LED display shines through the fine speaker mesh on the front, clearly showing the selected input, volume level and other info. Input, volume and standby buttons are found on top.

Despite being made from plastic, the soundbar’s robust build quality is commendable, and its slim bodywork is sure to win many admirers. It measures a skinny 35mm high by 82mm deep, which won’t get in the way when perched on your TV stand or mounted on the wall – the accessories for which are supplied in the box.

There are no rules about the size of TV it can be paired with, but the bar looked perfect beneath our 55in Samsung set (which we’re sure LG is delighted about). At 1020mm wide, it would probably look weird with a 32in set, with which you should step down to the NB4540 or NB3540. 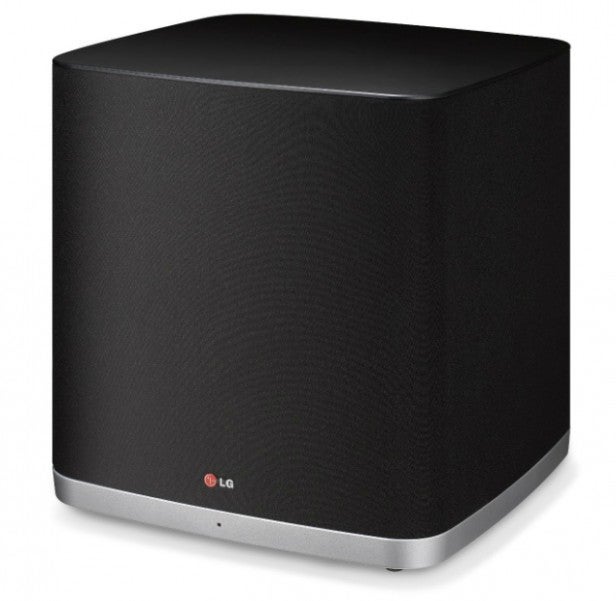 The subwoofer’s black finish, silky cloth and curved corners are highly stylish. It’s fairly bulky, but not unmanageably so – you shouldn’t have much trouble finding a spot for it, especially as the wireless receiver frees you from the restriction of cables. The only sign it’s awake is a little light at the bottom that glows green when activated.

On the back is a decent array of sockets, including HDMI input and output (which aren’t found on the NB3540). These allow you to pipe audio from external sources directly into the LG and pass the pictures on to your TV. The ARC-compatible HDMI output can receive audio signals from the TV, enabling you to listen to sound from the telly’s built-in tuner without having to rig up a separate optical cable.

The alternative is to connect your TV to the LG’s optical input, but it means you have to hook up all your sources to the TV. Completing the connections is a USB port for music playback and a 3.5mm minijack input for portable audio devices.

Apart from their sizes, the only difference between the NB4540 and NB5540 is the latter’s hi-res audio support. The hi-res audio DAC enables you to play FLAC files from a USB flash drive (up to 192kHz/24-bit), as well as MP3, WMA, OGG and WAV (up to 48kHz). That’s great news if you’ve built up a large collection of hi-res FLAC files, but the sniffy audiophile in us wonders if a soundbar will be able to make the most of them.

Built-in Bluetooth makes it easy to stream music from phones and tablets, while LG’s Sound Sync allows you to beam audio from a compatible LG TV via Bluetooth. Oddly there’s no NFC, but even without it pairing is a quick and easy process. The lack of apt-X is a greater disappointment, though.

The NB5540 is a 4.1-channel system, a step up from the NB3540’s 2.1 arrangement. There are four front speakers, split into front and ‘surround’ channels, and an amplifier that delivers 4 x 40W of power, plus a 160W amp in the sub (320W total). There are built-in decoders for Dolby Digital and DTS.

LG throws in a bunch of sound modes for different types of content – News, Music, Cinema, Sports and Bass Blast – but we prefer the Standard setting.

Like the NB4540 and 3540 before it, the NB5540 is a joy to use, thanks to the clear front display and intelligently designed remote. The HDMI output would have facilitated an onscreen menu system, but it would have been overkill given how easy it is to use anyway.

The remote’s button layout is spot-on, with large Bluetooth playback controls placed in the centre and volume keys at the top. Not only do the important volume buttons glow in the dark, but they’re also placed on a hump so you can find them without looking.

There are dedicated controls for sound modes, AV sync and woofer level (the latter offering a range of -40 up to 6) and all of your tweaks are clearly displayed on the front panel. You can toggle through the inputs using the Function button at the top. If you prefer to use your smartphone to control the soundbar, there’s a Bluetooth app for that.

We had no trouble getting the NB5540 to talk to our Samsung TV via ARC, but we opted to hook up our Blu-ray deck to the soundbar via HDMI and take advantage of the built-in Dolby/DTS decoding.

We hoped that the NB5540’s higher price tag and larger size might offer some improvement over the disappointing sound of the NB4540 and NB3540, but sadly that’s not the case. The same problems rear their heads again here, resulting in a performance that never quite hits the spot.

The main issue is a lack of cohesion between the subwoofer and the soundbar. We loaded up Pacific Rim on Blu-ray – the scourge of soundbars everywhere, due to its massive battle scenes – and during the opening scrap between Gipsy Danger and Knifehead we were hit by waves of boomy, overpowering bass from the sub as it relayed the heavy punches and thumping footsteps. Thankfully we were able to lower the subwoofer level to around -8 and it stopped sounding so dominant.

However that’s only part of the problem. The soundbar’s limited midrange means it doesn’t integrate with the subwoofer very well, leaving a gaping hole between the bass and treble. The two components sound like they’re operating separately, whereas the best soundbar/sub combos lock together so tightly that you can’t tell where one ends and the other begins.

The upshot is that the sound lacks punch and focus, draining much of the impact from the movie’s epic battle scenes.

The problem is compounded by the NB5540’s thin, harsh treble. During particularly frenetic passages played at loud volumes, exploding buildings and clashing metal armour are strained and artificial, while dialogue has a slightly nasal tone. Listen for a while and your eardrums feel like they’ve done twelve rounds with Carl Froch.

LG tends to tune its audio gear like this to ensure a brighter, more exciting sound, which might work when listening to tinny Drake tracks downloaded from iTunes, but for movies it needs to sound smoother.

Let’s not be too harsh on the NB5540, though. Despite these shortcomings it offers a huge step up in power and dynamics from flatscreen TV speakers, and creates a wide, involving soundstage with the Cinema preset selected.

And when it’s not being pushed to the limit by pugilistic robots, the LG uses its crisp tone to dig out lots of detail during quiet scenes, such as the bustling background ambience inside the Jaeger control bunker.

But when you switch to music the LG’s flaws are exposed again, particularly with a hi-res file. Its brash tone makes the trumpets and frenzied drumming of All Will Surely Burn by Sons of Kemet (FLAC, 96kHz/24-bit) sound shrill and messy, while the poorly integrated sub does a sloppy job with the track’s pulsating bass. We did, however, get more joy from a 320kbps MP3 of Blow Away (For Bill) by Kate Bush, the gentler jazz-inflected material sounding smooth and mellifluous. 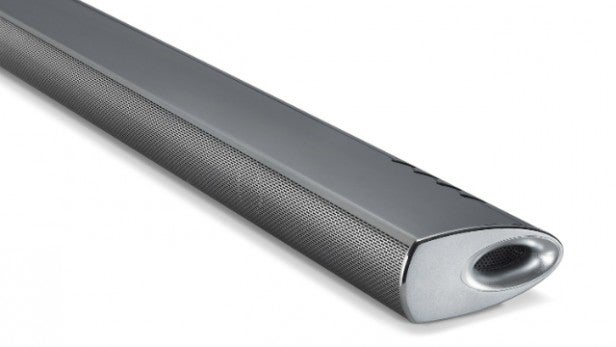 The NB5540 is an impressive soundbar in many ways, particularly in terms of design. With its gunmetal finish, curvy bodywork and super-slim dimensions, it’s one of the best-looking soundbars we’ve clapped eyes on and will be easy to integrate in any living room.

It’s also dead easy to set up and use, plus it packs a number of useful features, including Bluetooth and hi-res audio support.

But when it comes to sound quality, we’d say your money is better spent elsewhere. The poorly integrated bass and brash tone deny you the sense of cohesion and refinement you should expect when forking out this sort of cash, as well as negating the benefits of hi-res audio support. If you want top-drawer sonics for this sort of money, check out the Q Acoustics Media 4 or Orbitsound M10.

LG’s slim, glamorous 4.1 soundbar offers decent features and easy operation but is let down by a lack of cohesion and composure in the audio department