The NB4540 hails from LG’s shiny new range of soundbars and brings you big home cinema sound without bombarding you with boxes and cables like a regular home cinema system. It’s the ideal upgrade if you’re tired of your TV’s tinny sound quality but hate clutter.

The NB4540 is a 4.1 system, which means four speakers in the soundbar and a wireless subwoofer handling the bass channel. The step-up NB5540 is designed for larger tellies and doesn’t include a separate subwoofer.

Soundbars and soundbases are getting slimmer every year and the NB4540 continues the trend. Height-wise it’s 2mm slimmer than the Humax STA1200BSW Blade soundbar, but the LG’s 82mm depth compared with Humax’s 20mm means Humax can hang onto the ‘world’s slimmest soundbar’ title for now. 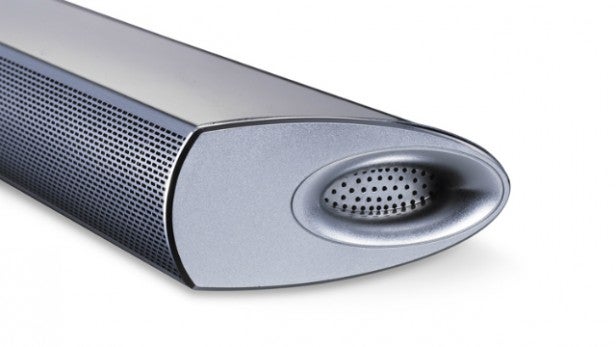 The NB4540 may not be the slimmest soundbar then, but it’s certainly one of the sexiest. LG has gone to town on the styling, tarting it up in a stunning brushed metal finish that glimmers and glints in the light. The curvy back end and side portholes lend a sense of elegance and the silver trim really catches the eye. Build quality is superb too, although the finish is plastickier than it looks when you touch it.

The high-quality front mesh plays host to a handy LED display that shows the currently selected input when idle, but there’s no dimmer function. On top of the unit is a row of stylish round buttons allowing you to select inputs and adjust the volume.

The bar can be placed on top of a TV stand, cushioned by rubber pads on the bottom, or you can mount it on the wall using the supplied brackets. The latter seems easy to do thanks to the supplied template for the drill holes.

On the back is an impressive array of sockets considering how little space there is to play with. There’s an HDMI input and ARC-compatible output, allowing you to feed audio signals directly from a Blu-ray deck or TV box and pass pictures on to your TV.

There’s also an optical digital input and a 3.5mm minijack port for portable devices. There’s even a USB port, which allows you to play music from flash drives. 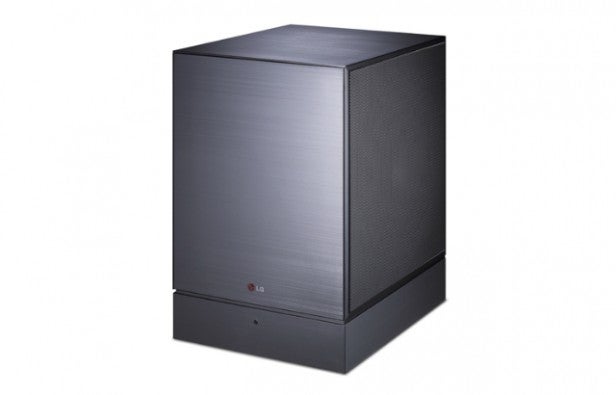 The subwoofer is a run-of-the-mill plastic box, although LG has jazzed it up with a brushed metal finish that matches the soundbar. It’s fairly hefty and robustly built, plus the 221 x 351 x 281mm dimensions shouldn’t pose a massive problem when installing it.

LG has packed a decent range of features into this soundbar. First up there’s built-in Bluetooth, making it easy to stream music from phones and tablets or to beam audio from compatible LG TVs using the Sound Sync feature.

On-board power is rated at 320W, while the 3D Surround Processor aims to deliver a wide, engulfing sound into your living room. There are also on-board decoders for Dolby Digital and DTS.

USB music playback is obviously a major feature and format support is terrific. You can play MP3, WMA, OGG, FLAC and WAV. The NB5540 adds high-resolution music support (up to 192kHz/24-bit).

Setup is a cinch and day-to-day operation is made simple by the legible LED display and well-designed remote.
Too many companies supply small, fiddly remotes with their soundbars but the NB4540’s boasts a proper full-size handset with large rubber buttons, much like one of its Blu-ray zappers.

That’s a godsend when it comes to operation, as it sits comfortably in the hand and all the keys are thoughtfully placed. The volume controls sit on a bump, which helps you find them in the dark. Often-used functions like Sound Effect and input selection are given their own clearly-labelled buttons, while Bluetooth playback controls are placed bang in the middle. You can also adjust the subwoofer level and introduce an audio delay with the remote.

Brainless it may be, but Pacific Rim on Blu-ray is a terrific test disc for soundbars because those pugilistic robots and monsters reveal a lot about a system’s bass performance and its ability to stay composed under extreme duress. There are also plenty of quieter talky bits to evaluate dialogue and top-end detail, from bleepy control consoles and splashing waves to the hubbub of the Hong Kong streets.

So how does the LG handle this audio onslaught? Very well actually, despite some small chinks in its brushed metal armour. We’ll come to those shortly, but let’s start with the good stuff.

Firstly the NB4540 offers a remarkably crisp sound, which will please those who like their movies open and airy. The soundstage is bristling with top-end detail – as Gipsy Danger battles Knifehead in the movie’s opening duel, the hiss of the waves and electric crackle as the Jaeger’s armour is breached are crystal clear. Every effect or line of dialogue is garnished with a dusting of treble that adds texture and impact.

On the downside, this emphasis on top-end crispness means it can sound overly bright when you turn the volume up high. Its high frequencies aren’t the most natural we’ve ever heard either – soundbars like the Wharfedale Vista 100 and the Canton DM50 deliver smoother, more realistic detail, whereas LG’s is more forced and hissy. Midrange frequencies are a little strained too

But that’s only a problem at unusually high volumes. Stick to a more reasonable level and you get a crisp, lively sound with impressive dynamics.

Elsewhere the subwoofer does a great job, lending a convincing sense of scale to the fight scenes. Massive footsteps are accompanied by forceful throbs of bass, which sound tighter and stop faster than expected, although it’s too overpowering in the default ‘0’ setting and takes a bit of trial and error to integrate – we found -2 to be the optimum setting.

The Cinema sound mode offers the best overall sonic balance. Dialogue is audible without being overly prominent (it’s too nasal in Standard mode) and there’s a terrific sense of width. This is boosted further by 3D processing – we could detect some sonic activity in the space to the sides of the actual speakers.

We took advantage of the LG’s Bluetooth connection to stream music and we were impressed by the results. Tunes bounce along nicely thanks to the agile subwoofer while the soundbar’s crisp character brings out hi-hats and percussion while adding texture to voices and instruments. It lacks the range and neutrality of dedicated hi-fi speakers but it’s fine for casual day-to-day listening.

Overall then, the NB4540’s crisp, engaging sonic character makes it a very enjoyable listen and the sub adds a decent depth and scale, although it doesn’t like loud volumes and other soundbars offer a more natural performance.

With its slim, elegant design, generous socketry, decent features and enjoyable performance, the NB4540 will be difficult to resist. There are better-sounding models on the market but the LG’s heady combination of features, design and performance make it a terrific purchase despite its shortcomings.

Next, read our Best Soundbars Roundup