One of four soundbars in LG’s current range, the NB3540 boasts a superior spec to the entry-level NB2540 but sits below the pricier NB4540 and top-end 5540. It’s a 2.1-channel system, the ‘.1’ part being supplied by a wireless subwoofer.

The NB4540 has already impressed us with its sparky (if somewhat bright) sound, generous features and gorgeous design, and we’re hoping for more of the same from its attractively-priced stable mate.

It’s not quite as stylish or well-made as the NB4540, but the NB3540 puts the vast majority of rival soundbars to shame with its glamorous silver finish and curvy bodywork. Build quality is also impressive for the money.

The slinky soundbar measures just 770mm wide, making it a good match for TVs up to 40in, while its 35mm height means it’s not likely to get in the way of your set’s remote sensor. It sits inconspicuously on top of your TV stand or you can hang it on the wall using the supplied brackets. 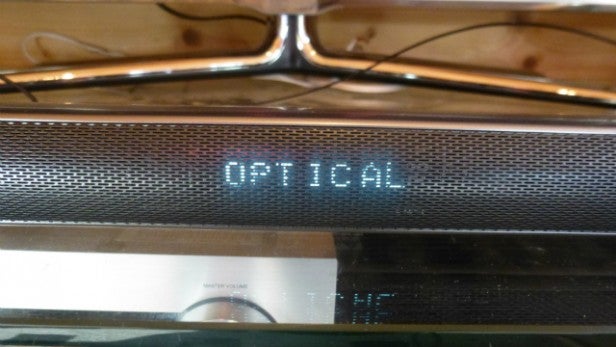 Clutter is kept to a minimum. In the middle of the front speaker mesh is a scrolling LED readout, the brightness of which can be dimmed if it’s too distracting. On top is a row of buttons covering standby, volume and input selection.

Unsurprisingly you won’t find any HDMI sockets on the back but you will find optical digital and 3.5mm minijack inputs. But the real bonus here is the USB port, which allows you to charge devices and play music from flash drives – quite a rarity among soundbars. There’s a downward-pointing USB extension in the box that makes it possible to connect a device when the soundbar is wall mounted. 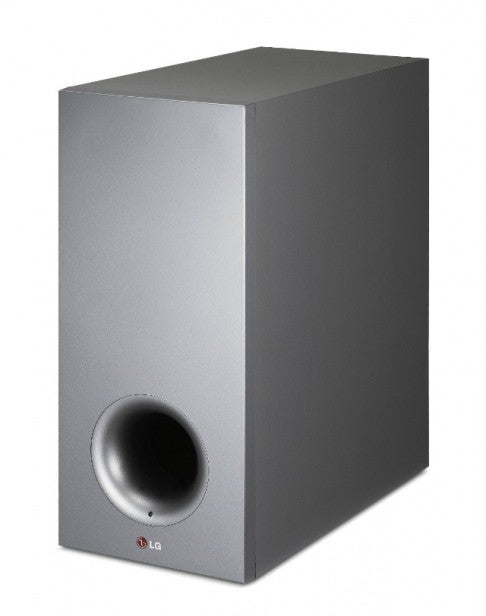 At 360mm high by 170mm wide, the side-firing subwoofer shouldn’t be too hard to stash somewhere in the room. It’s crafted from sturdy MDF and attractively styled in a silver finish to match the soundbar.

LG tends to throw a few more tricks into its soundbars than most and the NB3540 is no exception. We’ve already touched upon USB music playback, which allows you to play MP3, WMA, OGG, FLAC (up to 192kHz) and WAV, but there’s also built-in Bluetooth 3.0 and SoundSync, a proprietary wireless system that lets you control the soundbar with the remote of a compatible LG TV.

According to LG, the NB3540 kicks out 320W of power – 2 x 80W from the front speakers, 160W from the subwoofer – and boasts on-board decoding for Dolby Digital and DTS.

There are several sound presets to play with, each tailored to certain types of material – Standard, News, Music, Cinema, Sports and Bass. And those lamenting the lack of real rear speakers, worry not – LG’s 3D Surround Processor is on hand to fill the void by immersing you in sound.

The front LED panel makes life easy by flashing up messages in large digits, including the selected input and volume level.

The thoughtfully laid out remote features transport controls for Bluetooth/USB playback in the centre and unmissable glow-in-the-dark volume controls at the top. They’re even placed on a hump to help you find them by touch.

There are dedicated buttons for sound presets, auto volume and subwoofer level (the latter offering a range from -40 to 6). Hit the AV Sync button and you can apply an audio delay of between 10 and 300ms to marry up sound and pictures. All the buttons are clearly labelled and the handset sits comfortably in the hand.

If we’re being critical the bottom half is a bit cluttered but otherwise it’s very practical. Alternatively you can control the unit using LG’s Bluetooth remote app for iOS and Android devices.

The subwoofer speaks to the soundbar wirelessly and does so automatically when you switch both components on. If there’s a problem you can reset them by holding down the mute button for three seconds.

The NB3540 is a lively and enthusiastic performer that easily exposes the inadequacies of our TV’s speakers, but the soundbar’s slender dimensions inevitably put a ceiling on how good it sounds. The tiny drivers lack the authority and range needed to compete with the best soundbars at this price, and leave movies sounding imbalanced.

That said, there is still a lot to like about the NB3540’s performance. First of all it goes surprisingly loud for its size, which instantly increases the drama of action scenes and makes dialogue easy to hear. And secondly, like all of LG’s soundbars it has a bright, snappy tone that helps convey excitement.

This is ably demonstrated by The Desolation of Smaug on Blu-ray – as the dwarves cascade down the river, the sound of swishing arrows, hissing water and clanking weaponry scythe their way into the room, while the climactic showdown with Smaug is punctuated by vigorous blasts of fire.

It does, however, shoulder too much of the sonic burden. The soundbar’s limited bass extension and emphasis on upper-mid and treble frequencies means the sub doesn’t integrate very well and ends up sounding disjointed and localised. It does its best to fill in the gaps but sadly the gaps are too big for it to fill.

Additionally, the soundbar’s bright character is fine at first but becomes fatiguing after a while, particularly if you like watching films with the volume up loud. Aggressive effects like clashing swords and splintering wood sound hard and artificial, pulling you out of the moment.

The NB3540 conjures up a pleasing spread of sound, but despite LG’s claims, 3D Surround Processor fails to deliver the promised surround-like effect – the sound is confined to the area below your TV. If you want surround sound, buy a 5.1 speaker system for heaven’s sake.

Music playback is enjoyable enough but is also affected by cabinet constraints – vocals sound nasal, drums are a bit brash and although the agile sub keeps pace impressively with beats and basslines, there’s no cohesion – it sounds like it’s operating completely separately from the soundbar. 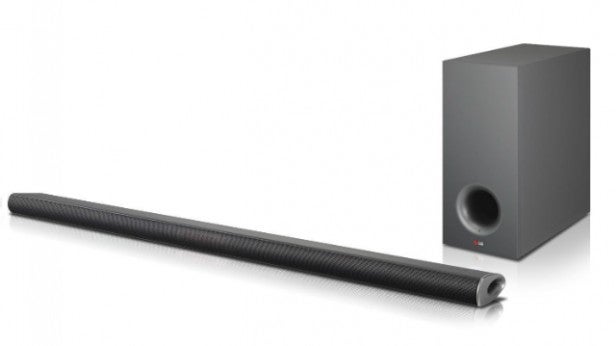 If you love the NB3540’s compact, stylish design and don’t mind compromising on performance to get it, then you’ll probably be very happy with your purchase. Its appealing feature list includes Bluetooth, USB music playback and Sound Sync, alongside a wealth of audio tweaks and a wireless subwoofer – not bad for £200.

However, its performance leaves a lot to be desired. There’s decent volume and lots of energy, but the soundbar’s limited range means the subwoofer is poorly integrated. And although LG’s characteristically bright character in the mids and highs ensures a lively sound, it does get a bit overbearing. Soundbars like the Wharfedale Vista 100, Yamaha YAS-103 and Roth Sub Zero II all do a better job for similar money.

But let’s face it, you don’t buy a super-slim soundbar and expect room-filling audiophile sound quality, so if you can live with its foibles then it’ll make a decent upgrade for your TV.

Flawed sound quality lets the side down, but LG’s stylish soundbar/sub combi brings a welcome boost for TV audio and offers lots of features for the money.

Next, check out our pick of the Best Soundbars and Soundbases