The LG NB3730A is billed as a ‘smart soundbar’, which means you can access a range of online content through LG’s portal – a fairly unusual feature on a soundbar with no built-in disc spinner.

The selection of apps is excellent, taking in high-profile apps like BBC iPlayer, YouTube, LoveFilm, Netflix, Blinkbox, Facebook and Spotify. The lack of ITV Player, 4OD and Demand 5 means it’s not quite in Samsung’s league, but to get any form of smart content from a soundbar is a real bonus, let alone content as good as this.

Away from these Premium services, there’s a wealth of other content within LG’s Smart World menu, including games, news, lifestyle and educational apps. There’s a ridiculous amount to choose from – half of which you’ll probably never use – but we love that LG is offering something for everyone.

Even better news is that you can access these services via the built-in Wi-Fi connection, although we opted for the more reliable Ethernet hook-up. Wi-Fi Direct lets you play media from mobile devices without going through a router.

Setting up the NB3730A is different than most soundbars, given the lack of HDMI inputs. If your TV is ARC compatible, it’s easy as pie – just connect the soundbar and Blu-ray deck to your TV’s HDMI inputs and select the relevant ARC settings within your TV’s setup menu.

However, with a non-ARC TV it’s a little trickier – one workaround is to connect your Blu-ray deck to the LG’s optical input, then connect the soundbar and Blu-ray deck to separate HDMI inputs on your TV. But that’s a bit convoluted and inconvenient, so our advice would be to forget about this model and step up to LG’s NB4530A.

That aside, setup is a straightforward process. You can easily adjust the speaker/subwoofer levels and toggle through sound modes using the dedicated buttons on the remote. When connected to a TV via HDMI, onscreen sliders display the levels, but you can also consult the front LED panel. The subwoofer pairs automatically with the soundbar, while connecting to a network is a breeze thanks to the helpful graphics and responsive onscreen keyboard. 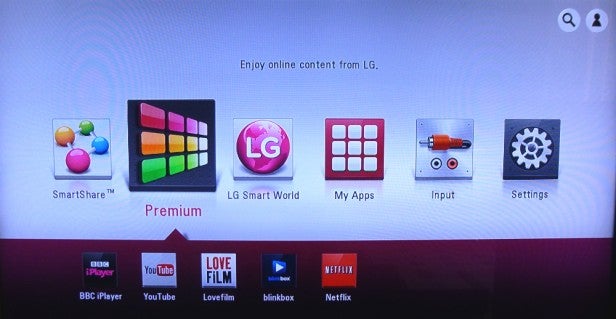 In fact, the onscreen menus are what make this soundbar such a joy to use. Delivered to your TV over the HDMI cable, they’re crisp, colourful and laid out in a simple structure. The Home menu is a row of six big, bold icons, allowing you to access DLNA content, online apps, connected sources and the setup menu. Highlight ‘SmartShare’ or ‘Premium’ and a banner at the bottom of the screen displays available servers or popular apps. 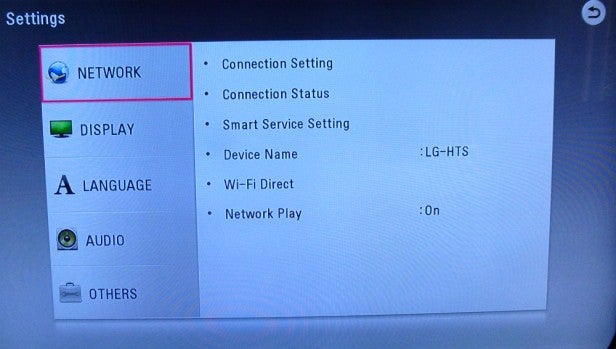 Select ‘Premium’ and the attractive presentation continues – large thumbnails for each app are superimposed over a vibrant, engaging background image of a park. Smart World is laid out with a similar sense of fun, placing the app tiles on shelves in their different categories, ready to be downloaded.

Eye-catching backdrops and clearly labelled folders make it easy to find music, video and photos when browsing DLNA servers or USB drives. And when you reach your desired file, the NB3730A displays any available cover art and metadata.

The NB3730A’s remote is long and slender, but thankfully not overpopulated with buttons. It’s a tactile zapper, with large, rubbery keys and a hump in the middle that lets you find the volume controls by touch alone. Add clear labelling into the mix and you’ve got one of the most user-friendly remotes around.