If you’re a Blu-ray player and sound system, but want to keep clutter to an absolute minimum, then the LAB550W could be your dream ticket. The Blu-ray player built into this 200W soundbase (or SoundPlate, as LG calls it) spins your discs while the speakers and subwoofer pump powerful sound into your living room. It’s the follow-up to last year’s SoundPlate LAB540, the first soundbase/Blu-ray combi.

However, the LAB550W has many more strings to its bow than Blu-ray. It can also be incorporated into LG’s Music Flow multiroom ecosystem, while internet apps, DLNA streaming and Bluetooth bolster the formidable feature list. All this is made all the more tempting by its surprisingly reasonable price. 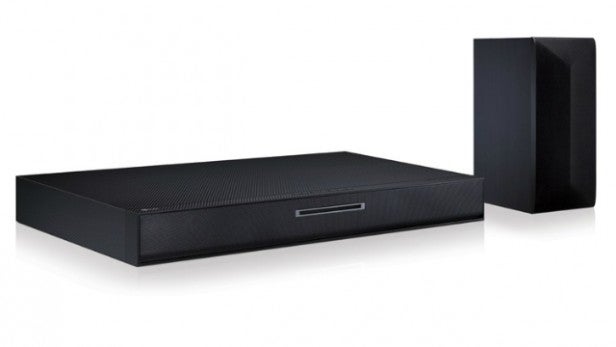 It’s not easy to make a flat box look attractive, but LG has managed it with the LAB550W’s classy design. The entire cabinet is covered in the same mesmerising 3D cube pattern as the BP550 Blu-ray player, etched in shades of black and grey.

The all-important disc slot is surrounded by silver trim and placed bang in the centre of the grey aluminium mesh on the front. Below the slot, a large dot-matrix panel displays helpful information such as elapsed time, volume and inputs. A row of buttons along the top front edge includes standby, volume, input selection, play, stop and eject. 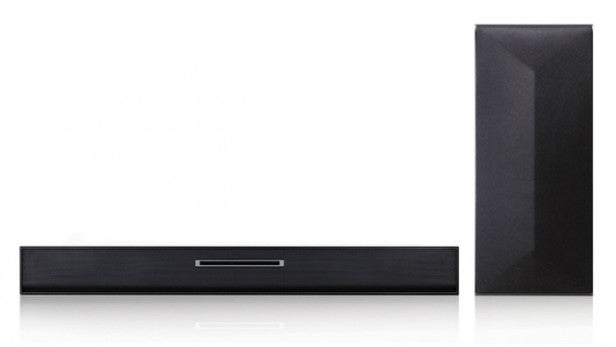 Considering how much tech is crammed inside, the LAB550W’s slim dimensions come as something of a surprise. Build quality is also excellent – the remarkably solid cabinet can take the weight of TVs up to 38kg, although your TV stand should measure no more than 680 x 270mm to fit safely on the top surface.

Spin it 180 degrees and you’ll discover a generous array of sockets. There are two HDMI inputs – neither of which are needed by the Blu-ray player, remember – and an ARC-compatible output that receives audio signals back from a TV. These are joined by optical and 3.5mm mini-jack inputs, plus USB and Ethernet ports. The USB port lets you play music, video and photos from pen drives and external HDDs, although it would have been far more convenient positioned on the front. 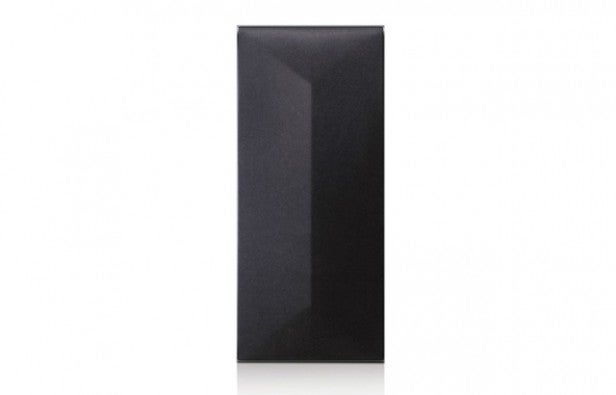 Unusually the LAB550W comes with a subwoofer, which does slightly negate the single-box allure of a soundbase. But thankfully it’s attractive, compact and connects to the soundbase wirelessly, which means you can place it anywhere in the room. It’s covered in the same pattern as the soundbase, while black cloth covers the front-firing 5.25in woofer.

Like the BP550 we tested recently, the built-in Wi-Fi connection lets you play CDs in the LAB550W and stream them to LG Music Flow speakers in other rooms, such as the HS7, H5 and H3. You can also stream music from USB devices plugged into the rear port. 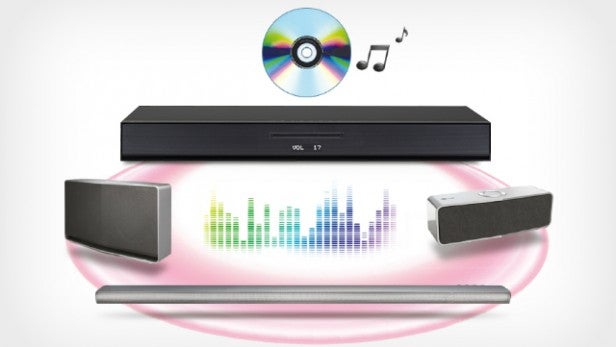 The LAB550W also offers a range of internet apps, which is great news if you don’t have a smart TV and fancy a bit of music and video streaming. The highlights are Now TV and Spotify, which at present you’ll find only on LG’s online portal. Spotify is particularly useful on a soundbase since you don’t need to rig up an external sound system to enjoy it. Both Spotify and Now TV require a subscription, but having such easy access to them might tempt you to sign up.

The selection also includes BBC iPlayer, Netflix, Amazon Instant Video, YouTube, Blinkbox, BBC News, BBC Sport, Deezer, iConcerts, CineTrailer, Dailymotion and Berliner Philharmoniker. Finding any internet content on a soundbase is a bonus, but this generous selection is going above and beyond.

The LG’s web functionality is complemented by DLNA streaming support with Smart Share. LG says it can play a variety of formats – including MP3, WMA, AAC, WMV and AVI – but the LAB550W seemed more reluctant to play our usual test files than the BP550, frequently displaying the “Cannot play this file” message.

The LG’s “hi-fi” DAC supports hi-res files up to 192kHz/24-bit, but we could play only hi-res FLAC and ALAC from USB sticks. The same goes for MKV videos.

In terms of audio spec, LG says the system offers a total power output of 200W, with 2 x 50W from the front channels and 100W from the subwoofer. The soundbase driver array includes four 2.3in mid-range units and two 13mm dome tweeters. There are on-board decoders for Dolby TrueHD and Dolby Digital Plus, but only standard DTS is supported.

LG hasn’t skimped on sound modes. There are seven presets – Standard, Cinema, Music, Flat, Boost, Treble/Bass and User EQ – plus a Night mode to improve intelligibility at low volumes. Auto Sound Engine automatically balances the bass and treble according to the content.

Rounding up the lengthy feature list is Bluetooth and SoundSync, which lets you beam audio from a compatible LG TV to the LAB550W. The only thing missing from the spec sheet is 3D Blu-ray playback, but the LAB550W’s HDMI sockets do support 3D passthrough from external players.

Setup is easy. Just slide the LAB550W under your TV and hook it up with an HDMI cable. If you’re using ARC then you’ll need to activate CEC in your TV’s setup menu. The subwoofer pairs with the soundbase automatically and goes to sleep when it doesn’t detect a signal.

The LAB550W is remarkably easy to use thanks to its gorgeous onscreen menus and fast response times. The homescreen uses LG’s familiar layout, with brightly coloured tiles laid out in a row. Here, you can jump to Video, Music or Photo content stored on DLNA servers or USB devices, explore the Premium apps menu or switch inputs. Highlight one of the tiles and a purple banner at the bottom displays the related options, including servers and apps. It moves between options instantly.

This eye-catching presentation pervades the entire menu system, from the Apps menu’s park-themed backdrop to the folder icons and thumbnails as you browse DLNA servers. This clear and straightforward layout will make newcomers feel right at home.

Using apps is also a hassle-free experience. The Spotify menu will be familiar to anyone who’s used it on a phone or PC, although inputting artist names into the search box using the remote is a tad cumbersome. BBC iPlayer videos load quickly and stream without any problems.

The remote is long, slender and packed with buttons, but the thoughtful layout means it never seems cluttered. The keys are arranged into distinct sections and clearly labelled. It’s not backlit, but the playback buttons glow in the dark and the volume keys are placed on a hump to help you find them when the lights are down.

The speaker-level button calls up an on-screen slider that lets you adjust individual speaker channels, plus you can toggle through sound modes using the Sound Effect button.

The LAB550W can also be controlled by a smartphone running LG’s Remote App. It’s slick and intuitive, replicating the buttons from the main remote, albeit in a different layout. You can even browse online apps and network servers, and drag favourite apps into a bar at the bottom of the screen.

Hit the green button during CD playback and you can select which Music Flow speakers to stream it through. You can even mute the LAB550W so music is played only in other rooms.

The LAB550W backs up its bulging feature list with a pleasing if not flawless performance. Its sound is loud and energetic, lending a sense of scale to action scenes that any TV will struggle to match.

Like most LG soundbars and bases, there’s an emphasis on treble, which is designed to make soundtracks fizz and snap without worrying too much about the finer details.

It’s not for everyone, but the LG’s characteristically biting tone guarantees instant excitement. During Star Wars Episode III: Revenge of the Sith on Blu-ray, lightsabers crackle sharply as Anakin and Obi-Wan go toe-to-toe on Mustafar, while John Williams’ score soars dramatically over the top. It’s an entertaining listen, and doesn’t make you wince when you turn up the volume.

There’s a nice spread of sound during the expansive space battles, with zooming ship engines and lasers fizzing across the front of the room. The LG also conveys the movie’s dreadful dialogue with impressive clarity and nuance, adding a convincing growl to the Emperor’s voice.

The problem, however, is in the bass department. In short, there simply isn’t enough of it, which is surprising given the presence of an external sub. The soundbase is all mid-range and treble, leaving the subwoofer to fill in the low-frequency gaps, but it lacks the punch and potency to do it properly.

We wanted the rumbling volcanoes of Mustafar to shudder through our chests and explosions to hit hard, but it never really happened. Rival bases such as the Geneva Model Cinema, Crystal Acoustics Teevy 6 and Cambridge Audio TV5 deliver bigger, meatier bass without the use of a subwoofer.

To be fair, things improve greatly when you switch to Cinema mode, which pushes bass to the fore and adds more depth to the mix. All of the other modes seem flat and lifeless by comparison. In Cinema mode, however, the sub doesn’t integrate tightly enough with the soundbase and ends up sounding disjointed. It also introduces a slight reverb-like effect that doesn’t suit all material.

The LAB550W is ideal for TV use where deep, thumping bass isn’t quite as important. When watching news, game shows or entertainment fare, voices come through clearly and theme tunes are played with gusto.

It also fares well when playing music. With the Music preset selected, tunes sound smooth and natural, while bass notes are tight and rhythmic. Treble loses composure when you crank up the volume, but on the whole it’s an impressive system for day-to-day listening.

Putting a Blu-ray deck inside a soundbase is such a likeable and logical idea that it’s impossible to resist. LG has executed it brilliantly, packing the LAB550W full of features and making it easy to use – all of which makes the £350 price seem very reasonable indeed. You’d be hard-pressed to find better separates for this money.

In terms of performance, we don’t think the subwoofer pulls its weight like it should, but the crisp, dynamic presentation and loud volume make for an exciting listen, despite the lack of low-end heft.

You’re not exactly spoilt for choice in this area of the market – but if you take the plunge, we doubt you’ll be disappointed.

It may not be the last word in audio quality, but this soundbase/Blu-ray combi is a killer proposition. It’s teeming with features and is a joy to use, while the integrated Blu-ray deck saves space. Throw in multiroom support and generous online content and you have a sound system that’s hard to resist