LG, it seems, is no longer happy to be thought of as the ‘cheap and cheerful’ TV option. For as well as costing a wallet-frightening £2,800 and delivering a huge 55in screen, the brand’s new 55LX9900 is a set stuffed to bursting point with naked AV ambition.


The extent of the 55LX9900’s ambitions is perfectly exemplified by its design. For starters, it’s the proud owner of what we’re pretty sure is the slenderest bezel yet seen on a large TV. It extends a mere 2cm beyond three edges of the LCD screen – and looks even thinner than that, thanks to the fact that an outer portion of the bezel is actual transparent. 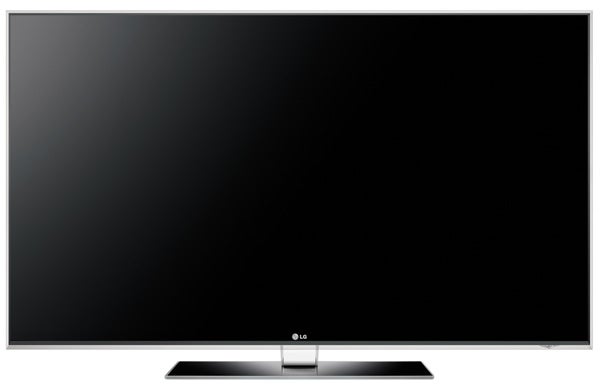 The slender theme extends to the TV’s rear too, which sticks out only a fraction over 30mm. And if all this remarkable lack of bodywork around a 55in screen hasn’t already won your heart, there’s also the TV’s ‘one-layer’ fascia to consider, not to mention the elegant table top stand with its glassy, self-consciously chunky neck and glinting finish.


Arguably the single most remarkable thing about the 55LX9900’s design, though, is the fact that its amazing slimness doesn’t depend on edge LED backlighting technology. In fact, the 55LX9900 employs direct LED backlighting, where the LED lights are positioned behind the screen rather than along its edges. Such TVs are usually thicker than most, but LG has got round this with a proprietary new direct LED design.


The hope has to be, then, that the 55LX9900 will deliver the top picture quality of direct LED technology from an edge LED-like body. Truly a match made in heaven.

The 55LX9900’s connectivity is prodigious. The usual four HDMIs get the ball rolling, one of which can be accessed from the TV’s side. This side HDMI is joined by a pair of multimedia savvy USB ports, while the rear sports a D-Sub PC jack; an RS232 for system integration; an Ethernet port for Freeview HD, DLNA and Internet services; and a port intriguingly labelled ‘wireless’.


To this latter port you can connect LG’s optional wireless AV system, enabling wireless transfer of video – including 1080p HD – and audio from your sources to the TV. We weren’t supplied one of these systems to test, so can’t confirm its quality, and couldn’t get a price for it from LG either. But if you’re interested, it’s really a pity it isn’t included within the TV’s already substantial cost.


Nor is that the end of the extra costs you might be looking at. For disappointingly the 55LX9900 doesn’t carry built-in Wi-Fi support. To take the set online you’ll have to hardwire it to your router or else buy an optional Wi-Fi USB dongle.


Unfortunately, the 55LX9900’s online capabilities don’t currently warrant the trouble and cost of getting the Wi-Fi dongle. For during our tests the only services available were YouTube, AccuWeather, and the Picasa photo site – and neither the YouTube nor Picasa services worked properly.

The 55LX9900’s ambitious nature re-emerges, though, with its 3D playback. Happily, unlike the Sony 40HX803, the 55LX9900 comes with everything you need to enjoy its 3D functionality already included, with the 3D transmitter built into the TV, and two pairs of active 3D glasses given away free within the TV box.


Also suiting the 55LX9900’s ambitious streak is its claimed 400Hz processing. As is often the case, there’s a little ‘number juggling’ going on here, for the screen doesn’t refresh 400 times a second, but rather 200 times with a scanning backlight just about enabling the 400Hz claim. Though it should be said that Samsung operates more or less the same system while sticking to 200Hz on its spec sheet.

The 55LX9900 additionally scores points for its level of set-up flexibility, which includes enough picture fine-tuning options to earn the set an endorsement from the Imaging Science Foundation (ISF). The set’s colour management features are particularly welcome, and pretty easy to use if you’re brave enough to have a go. Though the ISF route is definitely worth considering if you want to be sure you’re getting the best quality out of your hefty televisual investment.


It would be easy for a TV as feature-packed and flexible as the 55LX9900 to be nightmarishly complicated to use. But in fact its standard onscreen menus are superbly presented, with good use of large icons and an entirely logical structure.


Even better, the 55LX9900 includes a completely different and startlingly well put together type of control option dubbed the Magic Remote that lets you choose menu options simply by pointing the business end of the remote at the relevant part of the screen.


There are times when the 55LX9900 feels like a genuine TV pioneer – and thankfully those times continue with many aspects of its picture quality. Certainly it’s a pioneer in the sense that its 2D pictures are the best LG has ever produced, and a real rival for the very best LCD TVs from other brands.

The good news begins with a really impressive black level response that helps the 55LX9900 produce dark scenes believably and cinematically. Comfortably more so than with any of LG’s CCFL or edge LED TVs – or the CCFL and edge LED TVs of other manufacturers come to that. Just make sure you leave the TV’s local dimming option set to ‘on’, for otherwise black levels do drop off surprisingly sharply.


What makes the 55LX9900’s black level prowess all the more striking is the fact that the rich black tones are capable of appearing within the same frame as really full-on colours and bright, pure whites. It’s this sort of dynamism and genuine contrast (LG quotes a contrast ratio of 10,000,000:1!) that continues to make direct LED a premium force to be reckoned with.


Talking more about the 55LX9900’s colour palette, it really is spectacular, with a vast (though not to the point where anything becomes unnatural) range of tones; a superb amount of finesse to avoid ugly stripes or patches of poorly blended colours; and finally enough brightness driving colours out to ensure that they look almost luminously intense.


The 55LX9000 grabs your attention with its excellent sharpness, too. This is, of course, especially apparent with HD material, which looks superbly crisp and full of lovely HD detail – all made especially apparent by the 55LX9900’s huge 55in screen size. But standard definition pictures withstand the journey up to the Full HD 55in screen surprisingly well too, retaining likeable sharpness without appearing forced or suffering with much in the way of noise.

The sense of clarity about the 55LX9900’s pictures owes a considerable debt, too, to the set’s motion processing. For with TruMotion engaged at its Low level, we struggled to spot any significant blurring or lack of resolution during even fast action sequences. And nor, impressively, did we spot many processing side effects; just the very occasional little shimmer around the edges of large objects moving horizontally across the screen.


The artefacts increase uncomfortably if you push the processing above the Low mark, though. So don’t do it!


The picture stuff we’ve been talking about so far has largely been to do with the 55LX9900’s 2D images. But happily much of the good news carries over into the 3D realm, too. Colours certainly still look rich despite the inevitable dimming/muting effect of LG’s (decently comfortable) 3D glasses, and while brightness certainly diminishes, it doesn’t do so as much as on, say, Panasonic’s 3D plasma TVs.


The 55LX9900’s excellent motion processing earns its corn with 3D too, ensuring that objects don’t lose focus as they zoom from far to near and vice versa. 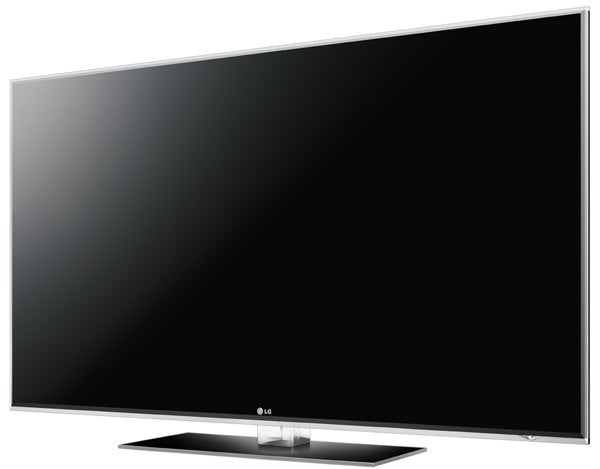 Unfortunately, though, we couldn’t find anything in the 55LX9900’s arsenal of video processing tools to tackle the dreaded phenomenon of crosstalk (double ghosting around certain lines or usually distant objects) that currently appears to be a universal problem with 3D on LCD TVs. Crosstalk is as obvious on the 55LX9900 as it is on Samsung’s 3D TVs, and whenever you see it it’s both distracting and tiring, as your eyes try to focus the ghosting images back together.


Our only other significant concern with the 55LX9900’s picture quality generally concerns the haloing effect you can sometimes see where bright objects are appearing against nearly black backgrounds. A result of the fact that the LED lights behind the 55LX9900’s screen are considerably less in number than the amount of pixels in the picture, the haloing issue is thankfully hardly worth bothering you about if you’re able to watch your TV from right opposite. But the haloing’s obviousness increases exponentially once you start watching from an angle of around 35 degrees or more.


Sonically the 55LX9900 is par for the thin TV course. Which is, of course, no great recommendation! The familiar lack of bass response is the biggest concern, leaving action scenes sounding thin and compressed. On the upside, though, the set does at least not fall into the trap of over-stressing trebles, so that the soundstage doesn’t sound lopsided as well as thin. And the set delivers a passably potent mid-range and fair volume levels without the speakers distorting.


The 55LX9900 is a dazzlingly bold and innovative TV from LG that shows emphatically just how ambitious the Korean brand is feeling right now – recession or no recession.


The only thing stopping us short of giving it a whole-hearted recommendation, in fact, is its 3D crosstalk noise. For we suspect that anyone thinking of spending the best part of three grand on a TV with 3D features will probably want to use those 3D features at least a little.


If you really don’t give a stuff about 3D though, and just want a stunningly designed, exotically featured big-screen TV that’s also terrific with 2D, then the 55LX9900 has got to be worth considering. 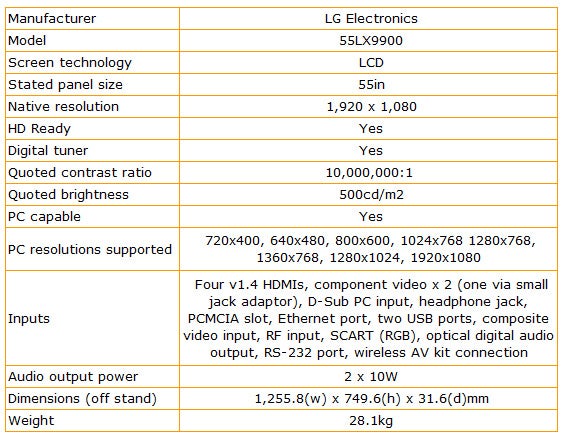