Only last week we looked at and were almost impressed by the first of LG’s new Infinia plasma models: the 50PK790. So we thought we’d give the brand the chance to address the one or two issues we had with that screen as soon as possible, in the form of the 50PK990: LG’s current flagship 50in plasma TV.


Given how soon it’s appearing after the 50PK790 review, the most sensible place to start assessing the 50PK990 is to spot how it differs from its cheaper sibling. 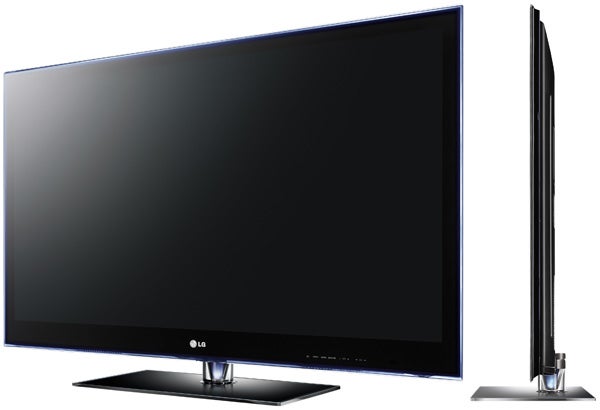 There’s a small aesthetic difference, to start with; a vaguely bluish tone in the extreme edges of the bezel and rather nice desktop stand, versus a vaguely greenish tone in the PK790 series. The bottom line, though, is that both TVs, with their slender bezels and ‘one-layer’ fascias, are equally gorgeous.


Rather more significant is the fact that the 50PK990 ships with an LG USB Wi-Fi dongle included, whereas you can only make the 50PK790 ‘wireless’ if you purchase the dongle separately.


Easily the most significant difference, though, is the 50PK990’s use within its screen of a proprietary ‘TruBlack’ filter, designed to block glare and reflections on the screen in a bid to boost contrast, which explains the higher 5,000,000:1 quoted contrast too.

So far as we can tell, the rest of the 50PK990’s spec looks bang in line with that of the 50PK790. Which means it also has 600Hz processing for more stable, colour-rich plasma pictures; approval from George Lucas’s THX organisation (including two THX-calibrated presets); and enough adjustment flexibility to earn an endorsement from the independent Imaging Science Foundation. Again, this is supported by two ‘ISF Expert’ picture presets, which a Foundation expert can use to store separate night and day modes.


If you’d rather have a stab at calibrating the TV yourself, meanwhile, you could do worse than start out with a built-in Picture Wizard tool, which leads you through a series of decently designed and simply explained test signals.


This friendly touch can actually be felt throughout the 50PK990’s operating system, which finds a weighty, thoughtfully laid out and backlit remote control joining forces with one of the most appealingly graphics-heavy and attractive onscreen menus the TV world currently has to offer. 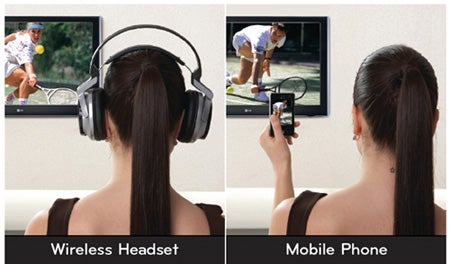 There doesn’t seem much point going through all the different picture fine-tuning tools again in this 50PK990 review when we covered them in some detail in the 50PK790 review. So here we’ll just restrict ourselves to mentioning a pretty sophisticated colour management system, and a variety of colour and contrast boosters.


One little issue to raise here that might affect people in borderline digital TV reception areas is that the 50PK990’s tuner doesn’t appear exceptionally sensitive. We have an adjustable gain system on our aerial feed so that we can test how well tuners hold up to weak signal reception, and the LG failed to pick up all of the usual digital TV suspects even with the signal strength reduced only a little.


We were also disappointed to note that LG’s NetCast online service still only comprises Accuweather.com, YouTube and Picasa – especially as YouTube and Picasa still stubbornly failed to work properly with our usually fine 2MB connection.

The first thing on our check list as we started assessing the 50PK990’s pictures was the severe image lag noted with our 50PK790 sample last week. And we were disappointed to find that some image retention is still there, albeit at a markedly less severe level than we noted on the 50PK790.


You only have to leave, say, the ”Sky News” or ”CBeebies” logo on screen for a few seconds before it’s made enough of an impression to still be visible for some time over subsequent images – especially if those subsequent images contain swathes of single colour in the areas where the logos appear. However, it must be said that the ghostly shadows of pictures past are far less overt than they were on the 50PK790 – in fact, they’re generally less prone to appearing at all.

With no usage timer on the screen it’s impossible to say if this image retention improvement with the 50PK990 is just because the sample LG sent us has done many more hours of service than the 50PK790 we had; after all, the sort of image retention problems we’re talking about should diminish the longer you use the screen for. But whether it’s down to usage time or an improved panel design at the 50PK990’s heart, we can only report what we see: and that’s less evidence of ghostly remnants of bright, colourful picture elements lingering over pictures long after they should have gone.


This makes the 50PK990 a more immediately attractive proposition than the 50PK790 we tested – though the fact remains that really we don’t see why any of today’s plasma TVs should suffer any image retention at all, no matter how short-lived the phenomenon might turn out to be. 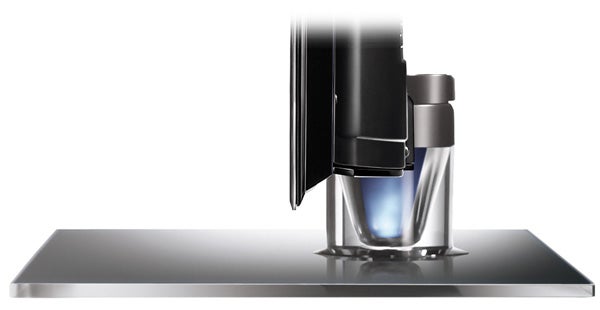 One other very curious – though possibly related – phenomenon of the 50PK990 manifests itself exclusively, so far as we could tell, when playing Xbox 360 games. What happens is that sometimes bright image elements cause a ‘cast off’ stripe to spread across the screen beyond the boundary of the area that should be illuminated.


The most obvious example of this can be seen in the Xbox Live menus of ”Call of Duty: Modern Warfare 2”, which features a sort of ‘striped’ menu system. If you scroll between the options on these striped lists, you can clearly see a ghostly extension of your currently selected ‘stripe’ spreading for a good three or four inches across the screen beyond the point where the actual menu bar finishes. We double checked this against four other TVs we had lying around, and not one of those produced the same curious ‘streaking’ issue.


The good news here is that we never noticed a similar problem with normal video viewing – even when watching white titles against black backgrounds. And nor did we notice the streaking more than once or twice during normal Xbox gameplay conditions. In fact, our main reason for mentioning it is that it’s just another little pointer towards LG needing to tighten up its plasma image controls a tad for its next plasma generation.

In most ways, the 50PK990’s pictures are actually pretty excellent. They’re bright by plasma standards, for a start, pinging out colours and peak whites with real vibrancy and vitality. Yet crucially this aggressive tendency seldom if ever spills over into garishness, particularly if you take the time to calibrate the screen well – or failing that, stick with one of the THX presets.


Colours are more natural in tone than with previous LG plasma TVs, too – a situation helped considerably by the screen’s ability to portray deftly subtle colour shifts and blends, even during dark scenes.


Talking of dark scenes, the 50PK990 delivers plenty of plasma’s black level advantage, producing rich, deep black colours yet retaining lots of the depth-generating shadow detail that eludes all LCD TVs to some extent. It’s well worth noting, too, that unlike the vast majority of LCD TVs, the 50PK990’s impressive black level response doesn’t falter if you’re forced to watch the screen from even quite a severe angle.


We’re duty-bound to add here that the 50PK990’s black levels don’t appear to go quite as profoundly deep as those of Panasonic’s G20 plasma series. But they still rate as excellent for the 50PK990’s money, and the TruBlack filter makes them look purer than those of the 50PK790. 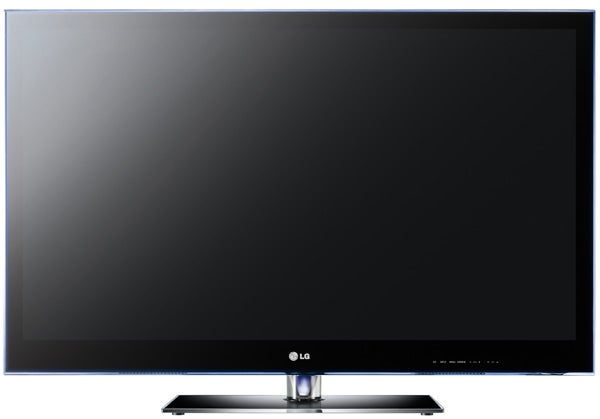 HD pictures look detailed and sharp, meanwhile, provided, at least, that you ensure all of the set’s noise reduction circuits are set to off and its aspect ratio is set to Just Scan (which removes all overscanning from the image). Actually, to avoid video noise, you have to be a little careful not to over-sharpen things; we wouldn’t recommend that the Sharpness setting gets any higher than 55, for instance, or that you use the set’s Edge Enhancement feature.


It does no harm to the screen’s sharpness that its motion looks crystal clear and blur-free compared with the LCD world. Yet it also avoids the slightly speckled look that once used to be a common plasma trait.


There’s a touch more judder around than some people might like, despite the 600Hz processing. But personally we found the judder levels to be quite cinematic when watching Blu-rays!


One final addition to the 50PK990‘s really quite impressive performance ‘hit list’ is the way it upscales standard definition pictures to the Full HD, 50in screen without making them look soft or noisy. There’s some colour tone slippage at times, especially with greens and skin tones, and skin tones occasionally look a little waxy. But we wouldn’t consider these to be serious – or rare – problems.


The 50PK990’s audio, meanwhile, is best described as ‘respectable’. The set can go quite loud without distorting, and retains good vocal clarity even during action scenes. But there’s a predictable lack of bass in evidence with rich musical scores and bombastic Hollywood action fare.


The 50PK990 improves on the 50PK790. Subtly when it comes to black level response, and majorly when it comes to image retention. Yet we still can’t quite bring ourselves to award it, partly because of a couple of little careless areas of picture indiscipline, and partly because we’ve spotted Panasonic’s P50G20 selling for a similar price, despite carrying a superior online service, Freesat and Freeview HD tuners (the LG only has Freeview HD), and, we suspect, even better HD pictures. Watch this space for a review of the P50G20 soon.