LG boasts one of the widest ranges of all-in-one surround sound systems around, catering for every conceivable need. One glance at the company’s home cinema webpage and you’re hit by a barrage of different speaker types, hi-tech features and flashy designs. The HX906PA sits somewhere in the middle of it all, offering a 5.1-channel speaker system – with tallboys for the front channels and compacts for the rears – and all the latest mod-cons like 3D support and media streaming. 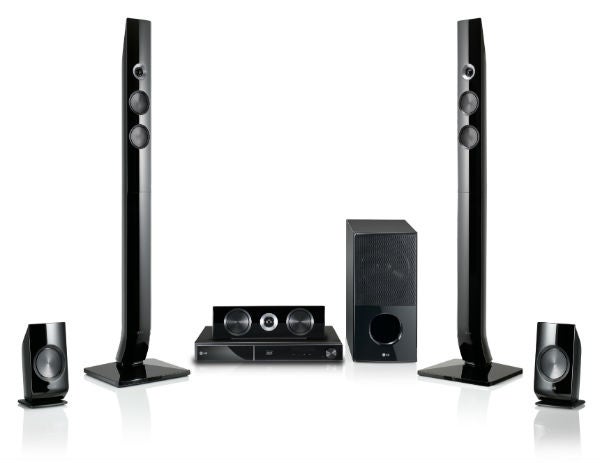 It’s not one of LG’s most extravagant-looking systems, but the speakers’ snazzy gloss black finish is sure to give it plenty of mass-market appeal. The main unit, which houses a 3D Blu-ray player and a 1,100W (RMS) amplifier, is a straight up black box with an opaque plastic front panel that allows a small LED display to shine through. It’s a well made unit, with the brushed strip above the fascia and touch-sensitive controls lending a hint of glamour.

On the left hand side of the fascia is a flap designed to hide the disc tray, but also lurking behind it is a USB port for the obligatory media playback, plus a 3.5mm mini-jack input for easy MP3 player connection.

You can always count on LG to be generous with its connections, and the HX906PA doesn’t disappoint on that score. There are inputs aplenty, including two HDMI inputs that turn the system into a switchbox for your HDMI-equipped kit, taking up just one input on your TV. It also makes it easy to enjoy TV through the system – particularly if your set is equipped with the Audio Return Channel feature.

You also get optical digital and analogue stereo inputs, component and composite video outputs and an Ethernet port. All of the speaker connections on the back are springclips, but at least they’re colour coded for easy setup. Rounding up the line-up is an antenna input for the built-in FM tuner.

The tallboy speakers are undeniably striking thanks to their height and gloss-black finish. They curve back where they meet the sturdy square base (which needs to be screwed on), and unlike many all-in-one speakers the bodywork is surprisingly solid. The rear speakers are cute, with clean lines and more of that ubiquitous glossy black finish, while the elongated centre speaker is slim enough to slot into tight crevices on your TV stand. Even the subwoofer is easy on the eye, although like the majority of budget passive subs it’s light and remarkably hollow when tapped.

It’s on the features front where the LG HX906PA really comes into its own. It’s absolutely crammed with cutting-edge features, so even if sound quality is absolute rubbish you’ll still feel like you’re getting loads for your money. We’ve touched upon 3D support, which along with a compatible TV and active shutter glasses lets you enjoy immersive, full HD stereoscopic pictures.

It’s also hugely pleasing to find built-in Wi-Fi, which makes it easy to access the system’s plentiful connected content. This includes DLNA-certified media streaming, which allows the unit to talk to other devices on your home network (PCs, NAS drives, smartphones) and play any music, videos and photos you might have stored on them. Supported video formats include DivX HD, MKV, AVCHD, M4V and WMV, while music formats include MP3, AAC, WAV and WMA.

Alongside that, you’ll also find a generous selection of internet content courtesy of LG’s Smart TV feature. These are separated into ‘Premium’ and ‘LG Apps’ on the Home Menu – the former contains the big-name content portals like BBC iPlayer, YouTube, Acetrax and Picasa, plus other stuff like Major League Baseball, AccuWeather.com, accedo (games) and vTuner internet radio.

The latter contains a range of other apps, including games, puzzles and other entertaining little curiosities. You’ll find stuff like Tarot cards, stories, colour blindness tests and other things relating to your fitness and general well-being. It’s a nice approach, showing that there’s more to home entertainment than just videos and music. You have to register with LG to install these though, which is a pain in the backside using the remote.

Elsewhere there’s a supplied iPod dock that plugs into the dedicated port on the back, making it easy to liberate the tunes on your Apple device. The USB port on the front supports pen drives and external HDDs, and as per usual the LG welcomes a wide range of formats (see above).

The system is fully au fait with Dolby True HD, DTS HD Master Audio and Dolby Digital Plus, and there’s no need to chuck out your DVD collection as the LG will not only play them but also upscale them to crisp 1080p resolution. Another fun feature is Music ID, which looks up the movie or song being played in the online Gracenote database and shows you more information about it – including the album art and other tracks on the same album.

You’ll also find a range of sound presets on board, including Bass Blast, Clear Voice, Natural, Natural Plus, Virtual, Game, Night, Loudness and Up Scaler – all of which are designed to alter the EQ depending on your taste. If you like you can sidestep them all with the Bypass mode, or fiddle with the parameters yourself in the User EQ mode.

The tallboy speakers take a bit of assembly, but it’s all self-explanatory. Once you’ve connected all the speakers using the supplied cables – which again is a simple procedure – then you’re ready to play with the settings. LG’s onscreen menus are beautifully designed, using friendly pastel shades and cartoony graphics, which makes everything easy to find. The setup menu is logical and responsive too. 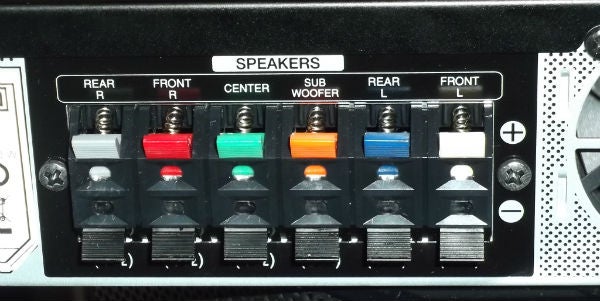 But when it comes to DLNA setup, there’s a sticking point – when trying to connect to our Windows 7 PC, it kept insisting on taking us to a CIFS sign in screen, which we couldn’t access no matter what combination of User ID and password we entered. This is bound to confuse and frustrate unacquainted users – indeed there are several online forum posts about the issue – which completely defeats the object. We’ve tested many DLNA products that connect instantly without this faffing around. You can install the supplied Nero software to stream without CIFS but that makes it more hassle than it should be.

However, the terrific onscreen presentation continues when using the Premium online content menu. The icons for the apps are superimposed over a graphic of a street, which is a nice touch. And the LG Apps menu is designed to look like rows of shop shelves. It’s all very attractive, but never at the expense of responsiveness. We also like the straightforward music and video menus, which made it reasonably simple to find albums or tracks when we finally managed to get media streaming working, although if you’ve got a massive collection like me then it takes a while to browse. 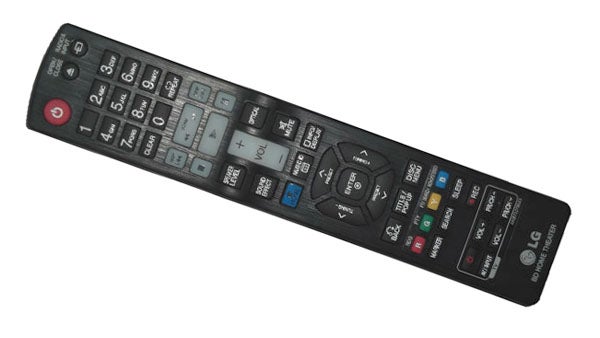 There’s no automatic calibration, but it’s easy to set the individual speaker levels. It’s all carried out by pressing the Speaker Level button on the remote, which shows a menu with sliders for each channel. Other sound settings, such as the presets, can be toggled through using the dedicated button on the remote. And while we’re on the subject, LG deserves plaudits for this zapper, which allows for intuitive navigation with its large buttons, clear labelling and thoughtful, spacious layout.

As with most all-in-one systems, you’ll have to be prepared for some slight sonic compromises if you invest in the HX906PA, but see past that and you’ll also be rewarded with a thrilling home cinema performance. Bung an action flick like Avatar into the tray and it’s soon clear that this system is out to entertain. During the Battle for Pandora, effects sweep and ping between channels with frenetic energy, the sounds of swishing arrows, hearty explosions and rasping machine guns filling the room.

It also delivers a coherent sound across all channels, which helps you get submerged in the intergalactic action, plus the subwoofer stays mercifully clear of the usual boomy, undisciplined bottom end you normally get from an all-in-one system – this one retains composure when pressed, throwing out deep bass tones that keep tightly in time with the onscreen action. If you want to really rattle the foundations you’ll need to set your sights on a separates system with a powered sub, but this is of a higher standard than we’ve come to expect from passive bass bins.

Add to that clear and authoritative dialogue presentation from the centre channel and a healthy amount of detail permeating quiet scenes, and you’ve got yourself an exciting, articulate home cinema system.

But what about those compromises we mentioned? Well the main problem with the HX906PA is the reproduction of high frequencies. When the action starts getting hectic, loud effects like smashing glass, screeching creatures and piercing gunshots have a harsh edge that can be a little uncomfortable, particularly when listening at loud volumes.

But when it comes to picture quality the HX906PA is a star performer. Blu-ray discs look beautifully crisp and solid, with colour vibrancy that’ll leave you gawping at the screen like a slack-jawed yokel. That carries over into 3D performance too – the system handles full HD frame-sequential images with all the detail intact, with smooth motion and no glitches to report.

Verdict
The HX906PA offers a stupendous amount of features for your money, including DLNA streaming, web content, media playback, an iPod dock, plenty of sound tweaks and excellent format support. Sound quality is thrilling too, but a bit of top-end brightness and cumbersome network setup spoils the party somewhat. If you can accept that as part and parcel of the all-in-one system experience and focus on all the other good stuff you’re getting, then the HX906PA is definitely worth considering.