If by the end of this review you decide to buy LG’s HT953TV all-in-one home cinema system – and there’s a very good chance you will – one thing we can guarantee right away is that you’ll be amazed by how much sheer hardware your £628.81 outlay has got you.


For in these days where home cinema systems are increasingly made to be heard without being seen, the HT953TV is pretty much the polar opposite of the ‘shrinking violet’. And it’s completely unapologetic about this fact, revelling in a glossy, extremely large design that’s intended to be a focal point for your living or home cinema room. 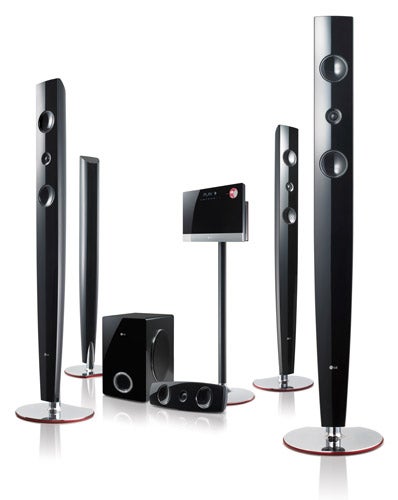 The four floorstanding speakers doing front and rear left/right duties, for instance, stand comfortably over a metre tall, and even the DVD player can be mounted on a tall chrome pole for maximum aesthetic impact.


There’s no doubt that for some people, the HT953TV’s sheer size will immediately make it a no-go zone. Indeed, LG itself stresses on its website that the HT953TV system is only intended for use in a relatively large room of at least 20 square metres. 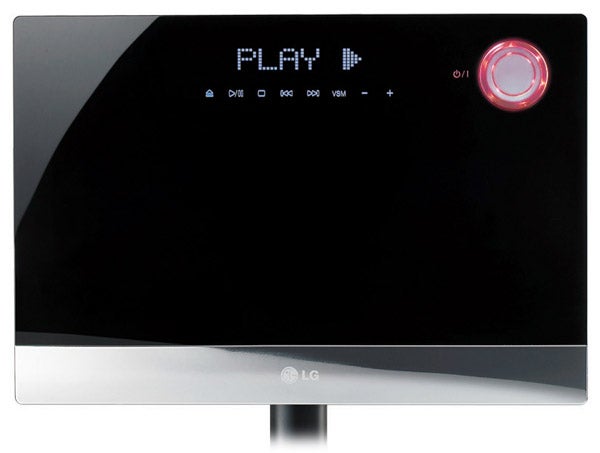 Personally, though, I adored pretty much everything about the HT953TV’s design, from the lovely way the floorstanding speakers taper in at the bottom, through the tinge of red around the stands and power light, and on to the outrageous glossiness of the piano black finish applied to every element in the system.


This finish isn’t just intended to look glamorous either. It’s also been designed to match the non-red bits of LG’s lovely Scarlet TV range, in a shameless but really rather enjoyable bid to get you to fill your entire room with LG-branded gear.


As well as the floorstanding speakers and pole-mounted DVD player mentioned earlier, the HT953TV package includes a subwoofer, and a centre speaker that looks much larger and more powerful than those found with most all-in-one home cinema systems. 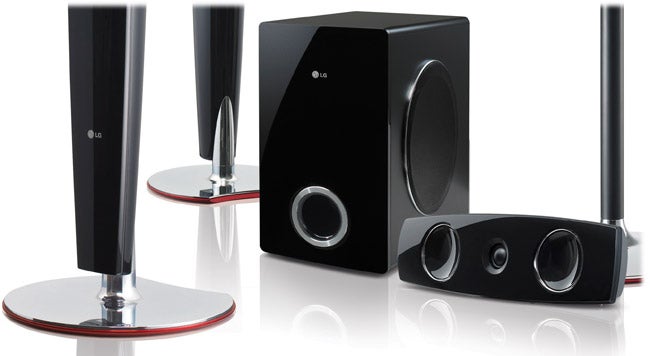 
Clearly this 10.1-channel claim is only possible via a bit of audio processing witchcraft; after all, the HT953TV package only includes six actual speakers, not 11. The relevant audio wizardry comes courtesy of a VSM (Virtual Surround Matrix) processor, which basically adds an invisible second speaker that sits just to the side of all of the five main satellite speakers, to produce a more complete sound ‘circle’ around your viewing position. As if this wasn’t clever enough, LG has also had the HT953TV’s audio specially tuned by renowned audio expert Mark Levinson.

Turning to the system’s convenience features, meanwhile, it’s good – if not surprising these days – to find that the HT953TV is compatible with HDMI’s CEC communications system, ensuring that you can control it using the TV’s remote.


Even more nifty is the system’s USB Direct Recording feature. This allows you to dump in MP3 form any CDs you’re playing in the system’s disc tray direct to a connected, compatible MP3 player or USB memory stick. The USB port that makes this function possible can also be used to play MP3, WMA, JPEG and DivX files through the system.


If you’re one of the legions of iPod users, don’t worry; you haven’t been forgotten. For the HT953TV supports iPod docking, complete with iPod control via the system’s remote control.


There’s more feature friendliness, too, in the shape of 1080p upscaling from the system’s DVD deck; an HD AV Sync feature to help you avoid the lip-synch problems sometimes associated with HD TVs and broadcasts; touch-sensitive controls on the main control unit; and a colossal (and quite probably very optimistic) claimed total power output of 1,000W. 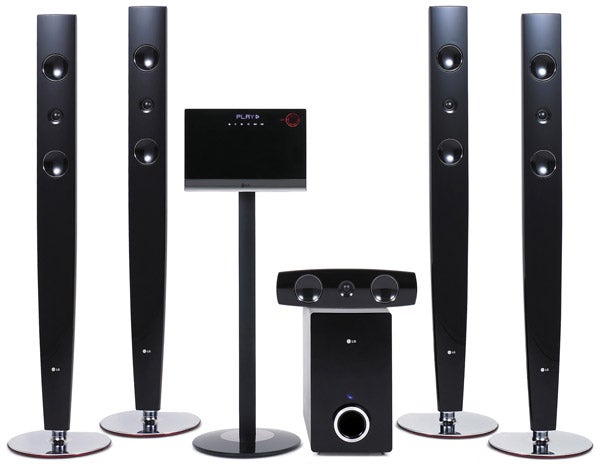 Before immersing ourselves in the HT953TV’s hopefully groundbreaking surround sound performance, it’s worth dwelling for a moment on other aspects of the system’s connectivity beyond the USB and iPod ports we’ve already covered. For these include an optical audio input so that external devices like a PS3 or Sky HD box can make use of the system’s audio talents, and the HDMI output necessary to ship the deck’s 1080p images to a suitably talented TV.


And so to the moment of truth: does the HT953TV sound as good as it looks? And does its much-vaunted 10.1 system actually deliver the goods?


Starting out in straight 5.1 mode, it’s quickly apparent that the HT953TV uses its unusually large size to deliver one of the most potent and dynamic soundstages we’ve heard from an all-in-one system. Those floorstanding speakers really do manage to produce veritable walls of immersive sound in front of and behind you, yet they do so without compromising the geographical accuracy of spot effects that’s so important in creating a convincing film or game soundtrack.


In other words, if a Splicer in Xbox 360 smash Bioshock (which I’ve strangely found myself playing again lately) is sneaking up from somewhere over your right shoulder, that’s exactly where you’ll hear them coming from – against a wider spread of rear-channel audio ambience that really locates you in the game’s terrifying world with remarkable conviction.


It’s worth stating, too, that despite the truly impressive power of the HT953TV’s floorstanding speakers, they’re carefully calibrated so that they never overwhelm the dialogue emerging – with clarity and richness – from the system’s centre speaker.


The size and power of the four main speakers also helps the HT953TV circumvent another common all-in-one system failing: detached bass. The likeably low but well-controlled rumblings of the subwoofer blend nearly seamlessly with the bottom end of the main speakers’ range, leaving no obvious bass ‘gap’.

Focussing on the other end of the audio spectrum, the HT953TV again uses its considerable size to great effect by delivering even the most high-frequency of audio effects with precision and, crucially, without sounding at all harsh.


Switching the system into its 10.1 mode is… interesting. And for once we’re not necessarily using the word interesting as a euphemism for bad! After all, the way the processing seems to close any gaps in the soundstage around you is actually quite uncanny.


We wouldn’t necessarily say that the effect sounds like you actually have five more speakers ranged around you, though, as there isn’t enough sense of there being five specific new audio source points. In fact, the 10.1 processing’s main effect is actually to reduce the sense of your sound actually emerging from specific points (speakers). 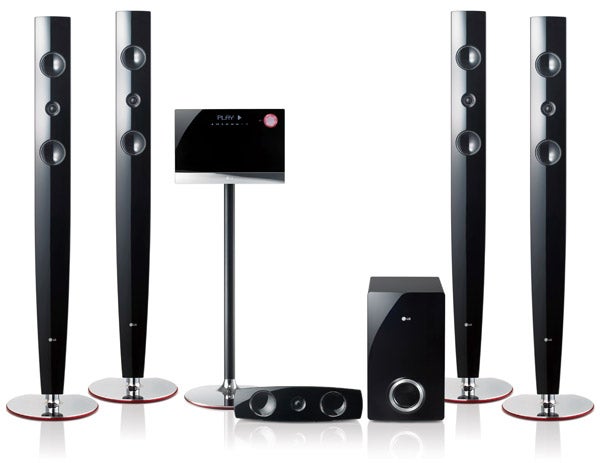 While some people might prefer the 10.1 effect’s arguably more immersive and three-dimensional presentation, we have to say that the purist in us kind of hankered for the more overt audio effect positioning achieved in the system’s 5.1 mode. But heck, it’s still nice to know you have the choice over which system you personally prefer.


The picture quality from the HT953TV’s DVD deck inevitably isn’t as headline-grabbing as its audio talents. But it’s certainly no mere afterthought, as proven by the lack of MPEG blocking and twitching in its standard def playback, and the surprising crispness and freedom from noise of its upscaled 1080p output.


There isn’t quite the same sense of colour solidity and motion purity you get with really high-level upscaling decks, but overall the images can be considered very good by the standards of an affordable all-in-one package.


We have to say we weren’t sure we’d like the HT953TV. We’ve kind of got used to slinky little systems like Pioneer’s LX01, and so the sheer largesse of the LG proposition got us off on the wrong foot.


But ultimately no matter how much the dimensions of our test rooms might have fought against its sheer bulk, its combination of high style, expansive features and great performance quickly put our resistance to the sword.