The ever decreasing prices of all-in-one home cinema systems means that even people on a tight budget can have full-on 5.1 surround sound in their living room. But the best part is that despite the price falls feature counts are also going up, making the latest generation of one-box systems feel like even better value for money.


LG is one of those companies with a canny knack of marrying generous feature lists with peanuts price tags. Its latest range of systems caters for all tastes, shapes and sizes, and among them is the HT902TB, a 1000W system with tallboy speakers and a vast array of sound modes, connections and playable formats. 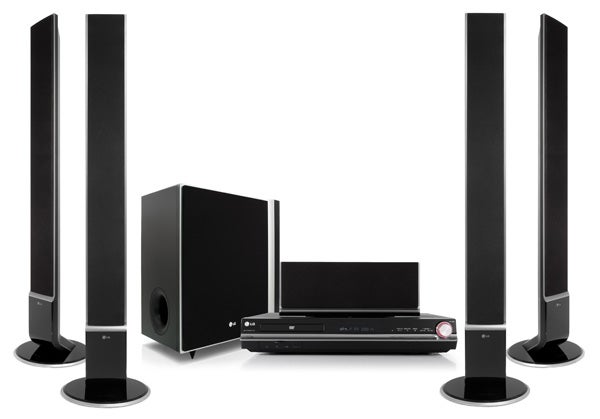 You get a sleek-looking main DVD player/receiver unit, which handles the amplification for the speakers and subwoofer (rated at 5 x 155W plus 225W for the subwoofer). The unit features a basic but smart black finish with a silver stripe across the front, a minimal row of buttons and a volume dial that illuminates red.


Opening the flap on the fascia reveals the first pleasant surprise – a USB port that allows you to play music, photo and DivX video files from flash memory devices. It lines up alongside a 3.5mm audio input for plugging in MP3 players and a microphone input for the system’s karaoke features.


On the rear panel is an HDMI output, which offers upscaled DVD pictures at 720p and 1080i, but not 1080p – a definite sign of cost-cutting. The HDMI port also offers the over-hyped but useful CEC functionality (which LG has christened Simplink), which lets you control this system and a TV using just one remote. Alongside HDMI is a set of component video outputs, an RGB-capable SCART, composite video output, stereo audio input and optical digital audio input, which lets you feed in bitstreams from external equipment. Inside is an FM/AM radio tuner, which explains the presence of an aerial input.

The speakers are imposing and plasticky, but from a distance they look rather classy. Each speaker slots onto a gloss black base, with a circular foot that conceals spring-clip terminals underneath. The passive subwoofer is an unremarkable black box, with rubberised feet to minimise performance-impairing vibrations.


LG has equipped the unit with some impressive audio modes. Taking centre stage is LG’s exclusive Virtual Sound Matrix (VSM), which creates five virtual speakers to generate 10.1-channel sound, filling in the gaps between the real speakers. It’s joined by XTS Pro, which balances the high and low tones and boosts the overall sound.


The main unit decodes Dolby Digital and DTS soundtracks, while the Pro Logic II mode spruces up sound from stereo sources. Disc compatibility includes DVD-R/-RW and DVD+R/+RW, and the system will play MP3, WMA, JPEG and DivX files stored on any of these platters.


Supplied with the system is a large remote with a tidy arrangement of buttons and comfortable positioning of the main menu controls, all of which makes it very easy to use. It packs in a lot of functions but the buttons are well spaced out so it doesn’t feel cluttered. The onscreen displays feature tasteful icons and legible text, while the main setup menu is logically structured and responsive, enabling you to alter the 5.1 speaker settings quickly and easily.

We weren’t expecting miracles from a system with such a bargain basement price tag, but the HT902TB surpasses our expectations with a rich and powerful sound. Perennial demo disc classic ”Gladiator” provides the perfect fodder to show off the system’s range, with its mixture of heart-racing action scenes and quiet dialogue-driven moments. The HT902TB succeeds on both counts – with action scenes like the opening battle between the Roman and Barbarian armies, the stirring score, clanking swords and battle cries from the front and centre speakers all sounding crisp, strident and smoothly steered, while the clear reproduction of surround effects really draws you into the action.


The Roman coliseum battle scenes take this superb surround performance to another level, with the cheering crowds completely enveloping you and ramping up the excitement levels. And usually we’re fairly indifferent toward virtual sound processing, but VSM is one of those rare modes that actually adds a great deal to the overall sound quality. When activated, the sound suddenly becomes even more forceful and immersive, convincingly linking up the space between the rear and front speakers. 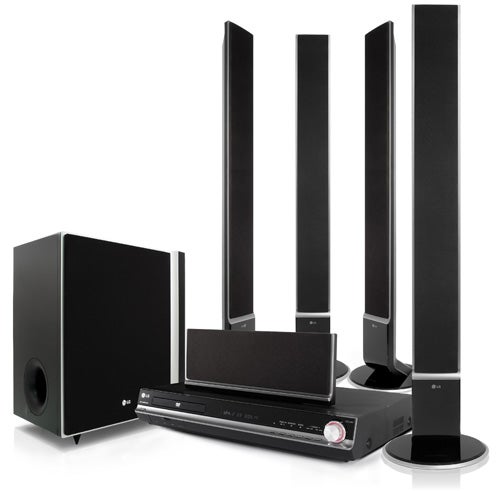 What’s also pleasing is how all six speakers gel together into one cohesive whole, with none of the channels overpowering the others. Even the subwoofer exercises remarkable restraint, lending the soundstage a fierce and punchy bottom end without ever sounding ‘boomy’ or hollow.


But before we get too carried away, it’s worth putting the HT902TB’s sonic performance into context – it’s very impressive when compared with other budget systems, but the sound quality still lacks the sophistication and transparency needed to rival a decent separates system or pricier home cinema systems from the likes of Pioneer and Philips.


As for pictures, there’s very little to grumble about. It makes ”Gladiator’s” tricky colour palette look solid and natural, while detail and edge definition are consistently sharp. Also, the lack of MPEG decoding or upscaling noise helps maintain the overall sense of clarity, and with 1080i pictures this strong, we’re not sure that 1080p upscaling would have offered a great deal of improvement.


The system plays the full gamut of supported video, music and photo files smoothly from disc or USB, making them look and sound superb.


The HT902TB punches above its weight with an assured performance that usually has no place on a system at this price, and surprisingly the virtual 10.1 sound mode actually works, adding an extra dimension to the surround sound quality. We’re also impressed by the inclusion of a USB port, support for a wide array of formats and attractive design, while its ease of use will be welcomed by home cinema beginners. On the downside, frills like 1080p upscaling and DVD-Audio playback are missing, but these could be sacrifices worth making for a bargain as good as this.