LG is attempting to put some sparkle back into the all-in-one home cinema market with its Champagne system, so called because it features front and surround speakers shaped like champagne flutes. It might sound barmy on paper but in practice it really works – the gloss black finish, metallic ‘stems’ and circular bases give the system a level of elegance that you don’t normally find at this price point. 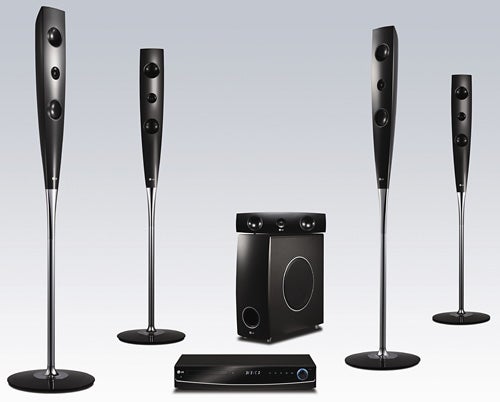 In all other respects, the HT762TZ is a regular 5.1-channel system. It comes with a main DVD receiver unit, which handles the system’s quoted 700W amplification, four tallboy speakers, a horizontal centre speaker and a passive subwoofer, which is plainly styled in black and pleasingly slim. The receiver unit features an attractive sloping, curved fascia, with some jazzy blue lights spicing up its all-black styling.


The main unit houses all the connections. Among them is an HDMI output that offers CEC support and DVD playback in resolutions from 576p up to 1080p, which will suit owners of HD Ready and Full HD TVs alike. It’s backed up by SCART, component and composite video outputs, alongside optical digital audio input – handy for playing back Dolby Digital soundtracks from a Sky+ box – and analogue stereo input. Finally, there’s a set of six spring-clip speaker terminals and FM/AM aerial inputs for the built-in RDS radio tuner.

The main unit’s fascia features a 3.5mm port for portable MP3 players and a USB port that houses flash memory drives, allowing you to play MP3, WMA, JPEG and DivX files. These file types can also be played from CD or DVD. Another surprising but very welcome addition to the feature list is DVD-Audio playback, allowing you to play these hi-res discs in full 5.1 surround. In fact, the only disc types it won’t play are DVD-RAM and SACD, making this system a wise choice if you have a wide range of home-burned discs.


There’s a generous range of audio tweaks to play with, including an interesting Virtual Sound Matrix (VSM) mode, which is said to add an extra five virtual channels to the regular six, creating a 10.1-channel effect. LG reckons this fills in the gaps between the speakers and allows sound to move more evenly around the room. We’ll test the validity of this claim in due course.

The DVD receiver is joined by LG’s excellent XTS Pro digital amplifier, which controls and stabilises the sound by balancing the high and low frequencies. Should neither of these modes appeal to your aural tastes, you can switch them off using dedicated buttons on the remote.


Of course, the system performs all the other duties you’d expect, such as Dolby Digital and DTS decoding and Dolby Pro Logic II processing. There’s also a straight stereo mode for playing music and a range of DSP modes that simulate a variety of environments. 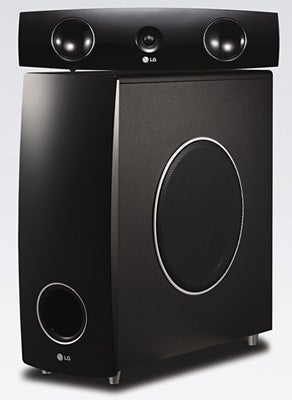 If you fancy belting out a few Sinatra tunes, then the system can also be used as a karaoke machine, thanks to the inclusion of two microphone ports on the front and a couple of dedicated settings in the setup menu. Curiously, our sample also came with a karaoke DVD, songbook and folder in the box, all of which were in Russian – we doubt this comes as standard.


Rigging up the system is self explanatory, as the various speaker parts screw into each other and the speaker cables are all colour-coded. We had it ready to go in 10 minutes. There isn’t a great deal to configure elsewhere, apart from the speakers – a well-hidden setup menu allows you to change the level of each channel, set the bass requirements and use a test tone to check your settings. 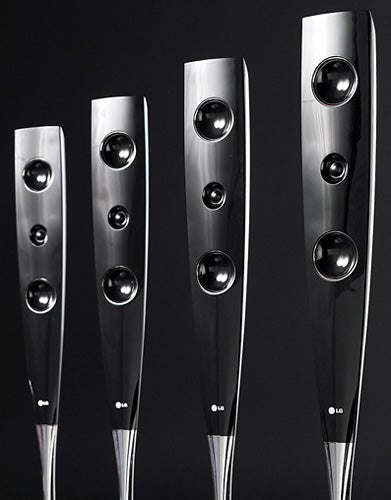 The setup menu itself is well laid out, while the remote is slightly on the large side and teeming with buttons, but they’re nicely sized and well labelled. Also pleasing are the dedicated buttons for changing the resolution and switching the HDMI output on and off.


But onto the serious matter of performance, and we have to raise a glass to the Champagne’s picture quality. With the resolution set to 1080p and viewed on a Full HD TV, our ”Revenge Of The Sith” DVD looks beautifully sharp and clean, with the system clearly relishing the chance to reproduce the movie’s immaculate CG images. Shots of Coruscant, with its plethora of buildings and moving vehicles, are reproduced with pin-point clarity, while colours look powerful and perfectly balanced. Even on a 52in LCD screen the image stands up well to close scrutiny, demonstrating the quality of the on-board upscaling.

And those champagne flute speakers prove to be much more than just a pretty face, providing sound quality that fizzes with energy. ”Revenge Of The Sith” sounds absolutely breathtaking – the opening space battle really shows off the system’s powerful, sharp and expansive sound output, throwing the effects around the room with smoothness and precision, all the while reproducing the ropey dialogue with effortless clarity.


And much to our surprise, VSM works very well. It’s not possible to pin-point exactly where or how the extra virtual channel information has been slotted into the soundstage, but the overall output seem a lot fuller and beefier, which works well during Sith’s many action scenes. 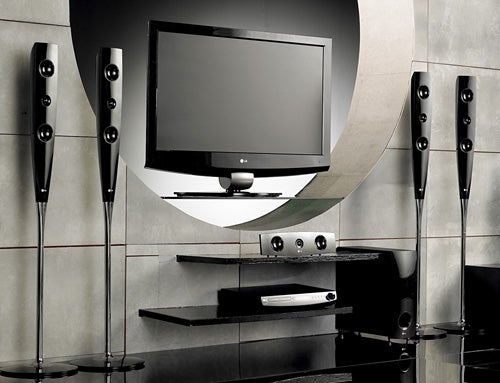 One slight flaw is that the subwoofer can sound rather flabby at times, drowning out the other channels during the opening shot of the Space Cruiser. This is often a problem with passive bass-boxes, but play about with the levels and you can find a favourable balance.


DVD-Audio playback sounds as smooth as silk, retaining all of the irresistible detail that the format provides to create some very realistic sounding live instruments. CDs also get a clean bill of health in stereo mode (Corinne Bailey Rae’s take on ”Since I’ve Been Loving You” sounds gorgeous), while MP3 and WMA rips are thoroughly enjoyable.


Normally we’d be suspicious of a product where the main focus is on looks, but in this case there’s plenty of substance behind the style. Its picture and sound quality are very impressive and there are enough features on board to make the price tag seem thoroughly justified.


But the last word should definitely go to the design – LG has created a beautifully elegant system that looks unlike anything we’ve ever seen – in other words, the sort of kit that will have you bubbling with excitement.