Another day, another LG one-box cinema system, but unlike the HT32S and HB354BS 2.1-channel bundles we tested recently this one offers a 5.1-channel setup and an intriguing new speaker design. At under £200 online this is a budget proposition through and through, but like most other LG systems there’s a wealth of features on board, and with 300W of power in the tank you could end up getting a lot of bang for your buck.


LG hides the HT304SU’s credit crunch price tag with some attractive styling, although the lightweight components (particularly the main unit) and plasticky fascia are clear signs of its budget origins. The satellite speakers are described as oval-shaped although they look more like spheres, and LG reckons that this shape – combined with the lack of speaker grilles – has distinct sound quality benefits. Each speaker is finished in a sassy gloss black finish, and the speaker cable is permanently attached so you don’t have to fiddle with springclip terminals. 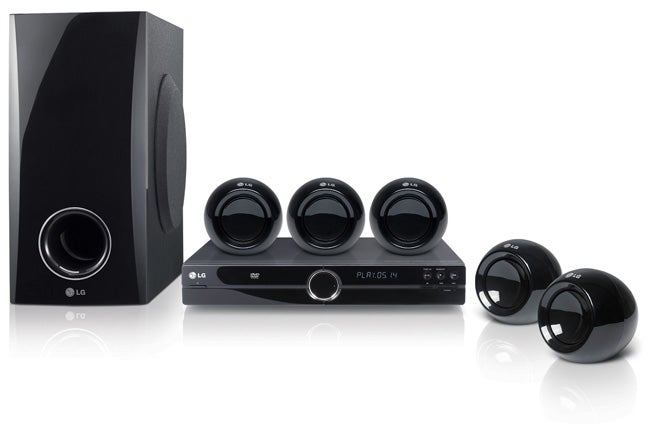 You also get a slim, unimposing passive subwoofer in the box, which is smartly styled to match the main unit, but make sure you keep the ugly MDF rear side well hidden.


The set-top style DVD/receiver unit offers no surprises, although it is narrower than most other LG all-in-ones. It’s also styled in black with an eye catching volume ring in the centre, an easy to read display panel and a small cluster of buttons on the right. Below these is a flap that hides a USB port and a 3.5mm minijack for MP3 players.


The rear panel is unsurprisingly sparse for a budget system, offering HDMI, component, composite and SCART outputs, analogue stereo input, an FM radio input and springclips for the speakers. There are no HDMI or digital audio inputs so you won’t be able to enjoy 5.1-channel sound from other sources like Sky+, which is a real shame even at this price.

It comes with the same black remote that accompanies the HT32S, with the playback and volume keys coloured grey to differentiate them from the rest of the buttons. The menu controls are located at the top within easy reach of the thumb and everything is clearly labelled. The only confusing aspect is the inclusion of ‘LG EQ’ and ‘EQ’ buttons, which appear to do the same job. 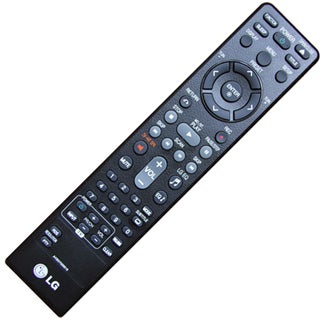 That USB port on the front panel will be of great use if you’ve got loads of digital content on your PC and want to relocate it to the living room. The unit happily accepts DivX, MP3, WMA and JPEG, and will also play them from CD or DVD, but DivX HD and XviD aren’t on the agenda. You can also rip tracks from the radio or an audio CD as MP3 files onto a connected USB stick, although they’re stored as ‘TRK_001′ and the deck offers no means of renaming them.


The HT304SU decodes Dolby Digital and DTS soundtracks and its Virtual Surround Matrix is said to expand the soundstage from 5.1 to 10.1 using clever acoustic techniques – in our experience with other LG systems this usually delivers a fuller soundstage. It’s joined by a range of other EQ modes for music (Pop, Classic, Jazz, and Rock), three Pro Logic II modes (Movie, Music and Matrix) plus Bass, Natural and MP3 Opt modes, the latter boosting the quality of compressed music playback.

Other features include DVD upscaling to 720p, 1080i and 1080p, Last Scene Memory (which picks up where you left off even when you remove the disc), photo slideshows and a x1.5 playback mode that speeds up the video but keeps the sound intact.


The onscreen design is typically basic for a budget product – a far cry from the sophisticated GUI of LG’s Blu-ray players – but it’s pleasant enough. The setup menu’s cursor is responsive, the graphics are cute and colourful and the structure is logical. Crucially, it allows you to set the size, volume and distance from listening position of each speaker. HDMI output resolution is set using a dedicated button on the remote.

We gave the HT304SU a run-out with ”Serenity” on DVD and although it’s not as impressive as the HT32S and HB354BS, it still delivers passable sound quality for the money. Getting an acceptable sound balance takes a bit of careful tweaking in the setup menu and selection of the right EQ mode, but when you’ve found it the system delivers a satisfying, if not particularly polished performance.


Skipping straight to the massive space skirmish between the Alliance and the Reavers (Chapter 15), the LG disperses the crashes, gunfire and roaring engines with plenty of force and crispness, although high-frequency sounds do have an unmistakably harsh character. The results are a lot more enjoyable than the Samsung HT-X720G but still not a patch on a good quality separates system.

The soundstage also feels expansive, although you do need to crank up the levels of the surround channels for them to make an impact. As noted on previous LG systems, the VSM mode makes the soundstage feel more complete and enveloping, without giving you the sense that extra channels have been added – switch to Normal or Natural and the sound is much flatter and more confined.


Also pleasing is the system’s distinct dialogue reproduction and power at lower volumes. On the downside, bass from the sub is slow and flabby where it should be nimble and punchy, but there’s enough rumble to heighten the impact of explosions.


On a 1080p-capable TV the HT304SU produces the sort of crisp, lively picture quality you’d expect from a budget upscaler, which is good enough for everyday viewing but won’t withstand scrutiny on a demanding display. There’s some noise in the picture and the occasional glimpse of a jagged edge, plus blacks don’t scale the depths plumbed by good standalone decks, but none of this interferes greatly with your enjoyment and at this price it would be churlish to complain.


If you’re spending this sort of money on a home cinema system, then you’re inevitably going to have to compromise on performance. And although that’s true of the HT304SU, whose sound quality is unmistakably tarred with the budget brush, it’s far from a disaster, plus its decent feature list and smart looks make those sacrifices much easier to accept. As budget systems go, you could do a lot worse.