The HS8 (or LAS855M to give it its full title) hails from LG’s range of Music Flow soundbars, which can be used in a multiroom system with other LG wireless speakers. It’s the middleman in the Music Flow range, sitting below the top-end HS9 (£650) but above the lower-specced HS7 (£400) – and as the only curved model of the three, it’s an aesthetic match for LG’s curved OLED and LED TVs.
The HS8 works like your typical soundbar, boosting audio from your TV alongside a matching wireless subwoofer. But with the addition of built-in Wi-Fi, it can also stream music over your home network using LG’s Music Flow app, while Bluetooth caters for your other portable devices.

LG knows how to make a good-looking soundbar, and the HS8 is a fine example of its craft. Finished entirely in silver with an elegant brushed top panel, the gorgeous HS8 is a fitting adornment for LG’s swanky new flat-panel TV sets.

If I’m being picky, build quality is slightly lower than expected for £500. A plasticky finish in places means it lacks the lacquered luxury of the similarly priced Orbitsound A70 airSOUND Bar. On the whole, however, it’s a well-made soundbar.
The solid aluminium grille hiding the front speaker drivers is perforated by dash-shaped holes that allow an LED display to shine through. This text-based display, which reveals the name of the selected input, volume levels and more, makes operation much easier than soundbars that rely on cryptic lights and icons.
On top of the soundbar is a row of icons that correspond to buttons on the rear. They aren’t touch-sensitive controls, something I realised only after a few seconds of fruitless jabbing.
Stunning it may be, but its substantial 1,200mm width and curved shape make it rather unwieldy and unsuitable for TVs under 55in. And if you’re thinking about placing it in front of a non-curved TV, I’d advise against it.
It’s remarkably slim – at just 43mm high it’s unlikely to block your TV’s remote sensor. If needed, there’s a pair of feet in the box that lift the bar off the surface. Alternatively, you can mount it on the wall using the supplied brackets.

A recess on the back houses a generous array of sockets, including an HDMI input and ARC-enabled output. The latter is able to receive audio playback from a compatible TV. There are optical, digital and 3.5mm mini-jack inputs, plus an Ethernet port and a USB port for software updates. The step-up HS9 offers three HDMI inputs.
With its silver finish and angled aluminium grille, the subwoofer is a stylish partner for the soundbar. Its fairly compact size should keep the other half happy, and since it’s wireless, you can position it in the most convenient spot – although it shouldn’t be placed too far from the soundbar.

The HS8 is a 4.1-channel soundbar with two 35 x 72mm racetrack woofers and two 13mm balance dome tweeters placed at the ends to widen the soundfield. The amplifier delivers 60W to each front channel and 20W to each surround channel, while the subwoofer musters 200W – that’s 360W in total.
The HS8 comes with built-in dual-band Wi-Fi (2.4/5GHz) delivered over a Mesh network to improve stability when used in a multiroom system with other Music Flow speakers and LG Blu-ray players.
The multiroom functionality is orchestrated by LG’s Music Flow Player, a free smartphone app for Android and iOS devices. You can send music to multiple speakers around the house (Multiroom Mode), or use the HS8 as the centrepiece of a 5.1-channel system using smaller HS4 Music Flow speakers as surround channels (in Home Cinema Mode). 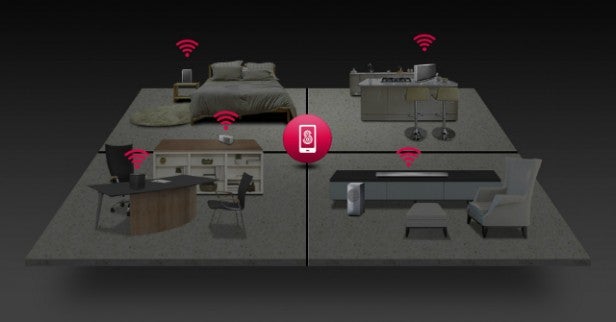 The app also provides access to music services such as Spotify, Deezer, Napster and TuneIn radio. Google Cast support lets you stream music directly from compatible apps (such as YouTube), while Bluetooth 4.0 completes a generous range of audio-streaming options.
Elsewhere, the HS8 boasts the I.A. Sound mode, which automatically adapts the sound to suit the content you’re watching. It’s joined by Standard, Music, Cinema, Flat and Treble/Bass presets, although I didn’t feel the need to deviate from Standard.
The LG will also play hi-res audio files including FLAC, WAV, ALAC and AIFF up to 192kHz/24-bit, plus MP3, AAC, WMA and OGG.

The easiest way to install the HS8 is to run your Blu-ray deck through the HDMI sockets – taking advantage of the built-in Dolby Digital and DTS decoding – and connect your TV to the optical input. That way, the HS8 will play whatever you watch.
If your TV is ARC compatible, then you don’t even need to rig up an optical cable – audio from the TV will be passed to the HS8 through the HDMI cable. You might need to activate the feature in the TV’s setup menu, but I had no trouble making it work.
Wi-Fi functionality is a different matter, however. To connect the HS8 to a router, you have to press the Wi-Fi button on the rear and follow the instructions in the Music Flow Player app. But it took several attempts for my phone to find the soundbar, after a lot of swearing and staring at blinking lights.
Once connected, the app is a pleasure to use. The bright and breezy homescreen gives you a choice of Favourites, Timeline (music you listened to recently), Most Played and Playlists. The section at the top is devoted to Recommendations, which finds music based on what you’ve played before.
Tap the menu icon at the top and a sidebar displays a list of music sources, including network servers, streaming services and the Gracenote-powered “Mood Station”, which selects music based on how you’re feeling. The connected speaker menu makes it easy to group two or more Music Flow products together or switch inputs.
The design is jazzy and sophisticated, with liberal use of crisp graphics and icons. Navigating through DLNA servers and music services is smooth and fast. The app also offers basic control over the soundbar, such as volume and track skipping.
The HS8 also comes with a thoughtfully designed regular remote. It’s ergonomically shaped and sports large, clearly labelled rubber buttons. The keys are firm and responsive, ensuring frustration-free operation.

Play Mad Max Fury Road on Blu-ray and the HS8’s powerful, exciting sound does justice to the high-octane chase scenes. Like most LG soundbars there’s plenty of bite and attack, which means car engines have a forceful rasp and explosions hit hard. But despite its forward presentation the LG maintains a pleasing tonal balance, with crisp treble and rich bass.

There’s also a convincing sense of scale. Convoys of rumbling trucks and tumbling boulders sound enormous, while the thunderous score has drive and urgency.

Deep bass from the subwoofer contributes to a weighty, authoritative sound, although it could be slightly tighter when there’s lots going on. It booms and flaps as the cars head into the sandstorm, but there’s no denying its power or enthusiasm.
Unlike some soundbars, the HS8 doesn’t struggle to hit neighbour-baiting volumes. It delivers the sort of room-filling sound that your TV can only dream of with the level barely over half way.
Even more impressively, it doesn’t completely lose composure when you turn it up. Action scenes remain intelligible and gunshots don’t test the tolerance of your eardrums.
The full-bodied mid-range means dialogue is clearly reproduced, remaining audible even during the movie’s busiest moments. That’s also great news when watching TV, as you don’t need to stick the subtitles on to follow the plot of Homeland.
The LG’s biggest flaw is a lack of detail finesse – there simply isn’t enough nuance in the sound to match class-leading bars such as the Q Acoustics M4 or the DALI Kubik One.
The tweeters hiss and fizz enthusiastically to suggest an impressive sense of width and openness, but provide little insight into the subtleties of the soundtrack. The HS8 is all about impact and excitement – which is an admirable approach, but one that denies you the movie’s finer aspects.
The same goes for music: it’s well-balanced, weighty and enjoyable when you crank up the volume, making it a terrific conduit for casual listening, but it lacks the warmth and high-frequency sparkle to make your spine tingle. 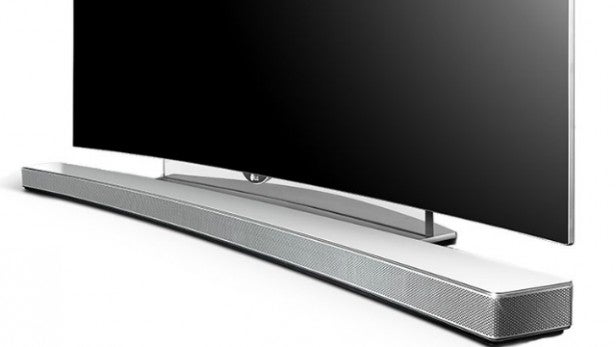 Should I buy the LG HS8?

If you’re sick of the lacklustre sound coming from your curved TV, then the HS8 is a solid solution. There’s much to recommend it, not least its elegant design, slick smartphone app and powerful performance.
Movies are an absolute blast thanks to its weighty bass, great sense of scale and attacking, dynamic tone. It’s expensive, but the generous features and engaging performance make the price tag seem reasonable.
On the downside, there were one or two teething troubles with the app-based setup and if you’re after a detailed, insightful listen then you might want to check out more hi-fi-orientated soundbars from the likes of Q Acoustics and DALI.

A stylish, feature-packed curved soundbar that delivers sonic excitement in spades. Those seeking subtlety and finesse will be disappointed, however.