Our experience so far with ‘ultra portable’ projectors has been a real mix. There’s been the good (Samsung’s SP-400B), the bad (Optoma’s Piko PK101) and the pretty (the BenQ GP1). As such I can honestly say that I really have no preconceived idea of how our latest pocket projector, LG’s HS102, is going to shape up. Though with a surprisingly high price tag of £477.87 – more than £100 dearer than Samsung’s P400B – it’s fair to say that it really needs to sit nearer the Good end of the spectrum… 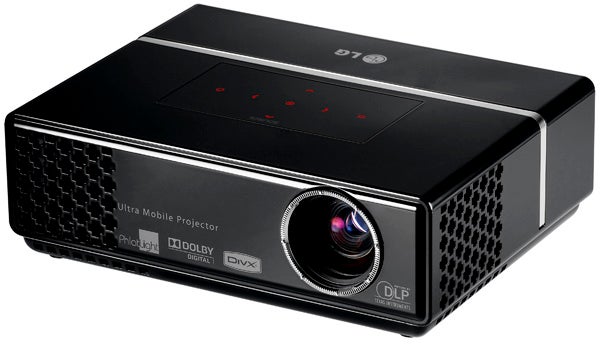 First impressions, at least, are promising. The HS102 is quite an attractive little number in its glossy black exterior, with red-lit buttons and little silver highlights. It’s also markedly smaller than the Samsung P400B, at 154 x 117 x 50mm, and weighs just 780g. This arguably still doesn’t make it genuinely pocket-sized in the way Optoma’s extraordinarily tiny PK101 is pocket sized, but it’s certainly ultra-portable – especially as it ships with a nicely designed fabric carry case.


It’s a pity, perhaps, that there doesn’t seem to be any easy way of covering the lens to prevent possible damage during transit. But then the lens is recessed quite a way in from the projector’s front edge, so is less likely to be damaged than a protruding or flush lens arrangement. 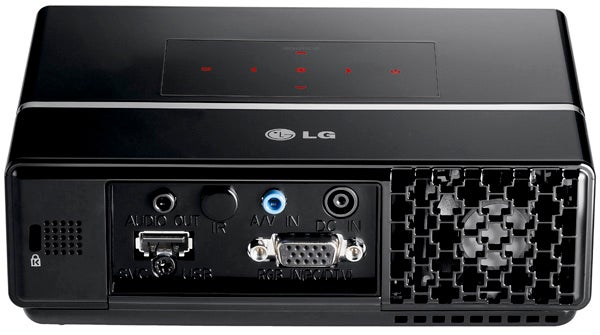 Unfortunately, the HS102’s generally positive first impressions initially seem to flounder as we check out its connections since, as is common with ultra-portable projectors, it’s not exactly bulging with connections. All you get is a VGA input, a 3.5mm ‘AV input’, a USB port, an infra-red input, and a headphone jack.

The HS102 seems to have its heart in the right place with its key specifications, too. For starters, it boasts a really credible – for this type of product – brightness output of 160ANSI Lumens. Enough, reckons LG, for the projector to comfortably deliver a 60in image. It also has the same very respectable 800×600 resolution as Samsung’s P400B, claims a good dynamic contrast ratio of 2,000:1, and delivers the usual LED ultra-portable projector promise that you should only need one bulb for the entire life time of the projector.


Another nice touch is the HS102’s built-in DivX technology, enabling the projector to play movies through its USB port, as well as MP3s and JPEG photo files. You can use the HS102 even if there are no power sockets nearby, meanwhile, courtesy of an optional two-hour external battery. 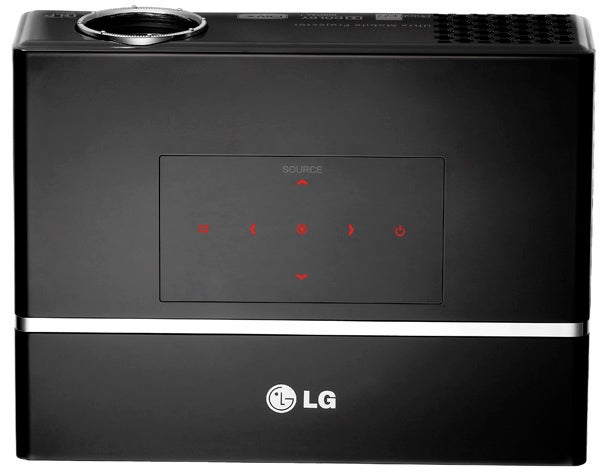 Setting the HS102 up quickly reveals that sadly – though not at all surprisingly – it doesn’t have any optical zoom whatsoever, meaning you can only adjust the image size by moving the projector physically towards or away from your screen or wall. On the upside, the projector does carry a decent degree of keystone correction so that you can easily get the sides of the image straight.


Onscreen menus are nicely designed and contain a couple of unexpected features, such as the option to adjust the projector’s Overscan level and ‘Smart Picture’ presets that include Film and Sports mode. This latter discovery is particularly significant, for it reveals that the HS102 has ambitions on living room use, rather than necessarily focussing exclusively on the board room, like most ultra-small projectors do.


The first thing that struck me about the HS102’s picture as I settled down to watch it was how bright it is. So, while the pictures from Optoma’s PK101 were barely bright enough to watch in even a totally dark room, the HS102 really can be used with a degree of success in a modicum of ambient light. This is, of course, very useful in both business and casual domestic environments, where achieving total darkness is seldom practical.


If you can manage to darken your room down, though, then the HS102’s brightness delivers a different advantage: good levels of dynamism and colour vibrancy in the picture for a pocket projector, as evidenced by the ultra-colourful opening credits of Casino Royale on Blu-ray.


Pictures also look pleasingly sharp. HD video images fed in via the component ports look clearly crisper and more textured than any standard definition fodder, to the extent that you can even make out such HD niceties as film grain. This ability to make HD actually look like HD is a really noteworthy accomplishment for the HS102; possibly its biggest selling point, especially as the sharpness isn’t affected by blurring when the action starts.

The HS102’s combination of sharpness and brightness naturally serves it well, too, when switched to a PC source, delivering PowerPoint presentations and the like with reasonable verve.


Not that standard definition pictures look bad either, though; in fact, they look quite natural, with natural colours and no serious scaling noise issues. If there’s one aspect of the HS102’s pictures that perhaps lets the side down, it’s black level response. Dark scenes look infused with a sub-tone of grey, making them look less natural and involving than the same scenes look on Samsung’s P400B. 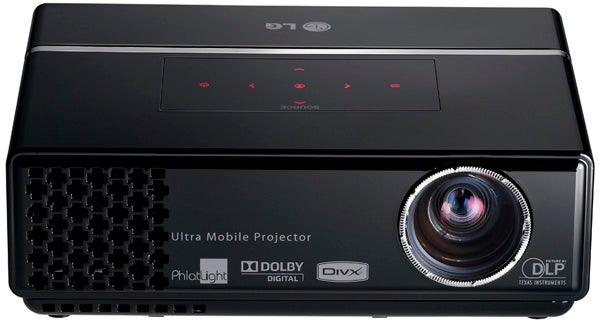 To be fair, I wouldn’t characterise the HS102’s black levels as actually bad – especially if you choose the film preset, switch the lamp output to its Economy setting, and nudge the brightness level down. But the black levels of Samsung’s P400B are definitely better, despite the HS102 seemingly being more blatant with its home cinema ambitions than the P400B.


The convenience factor of the HS102 wouldn’t be complete, of course, if it didn’t have some sort of audio reproduction on board so that you can get sound to accompany your pictures without having to rustle up some sort of separate audio system.


With a whole 1W of mono audio power, I obviously wasn’t expecting the HS102 to fill the room with surround sound magnificence. Yet the reality is actually even worse than anticipated. Even at maximum volume it struggles to be heard in any room bigger than a shoe cupboard and it tends to distort quite badly when pushed even slightly hard by any sort of orchestral score or action scene.


The HS102 is in most ways a solid effort by LG, offering a well-judged balance between extreme portability, design robustness, and engaging picture quality. Personally I preferred the slightly larger Samsung P400B’s performance, especially if you’re looking for a machine to do domestic film as well as business presentation duties. But by far my biggest gripe with the HS102 has to be its price; it just doesn’t do enough in my book to justify costing £100 more than its Samsung rival.