LG has thrown everything and the kitchen sink into this one-box system, which combines a Freeview+ DVD/HDD recorder and 400W 3.1-channel sound system. At around £500 it’s pricier than a lot of 5.1-channel systems on the market, but we’re hoping its extensive functionality and performance can justify the expense and make it a viable option for people who don’t have room for rear speakers. 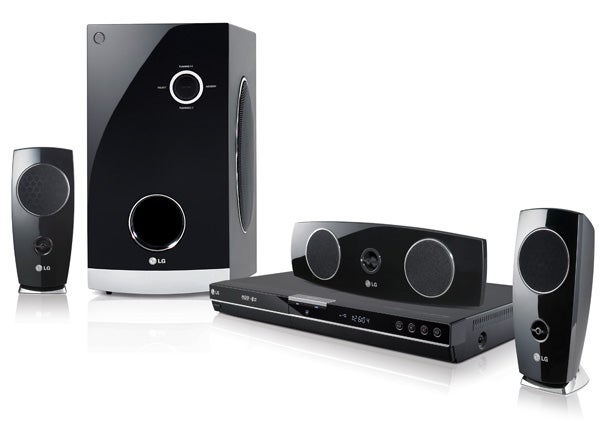 In the box you get a pair of bookshelf style front speakers, a centre speaker, a powered subwoofer and a slim main unit which houses a 160GB hard-disk, Freeview tuner and DVD/CD player. The main unit looks similar to the RHT399H recorder combi we reviewed back in September and it’s a very attractive machine, fitted with a tasteful gloss black fascia and constructed from aluminium to give it a hefty, robust feel.


The front panel offers a few buttons to control playback and to change the HDMI output resolution (which strangely isn’t found on the remote). In the centre is an eye-catching silver panel inscribed with the DVB logo, while the lower section features a flap that hides a row of auxiliary inputs – USB, DV, composite and analogue stereo. 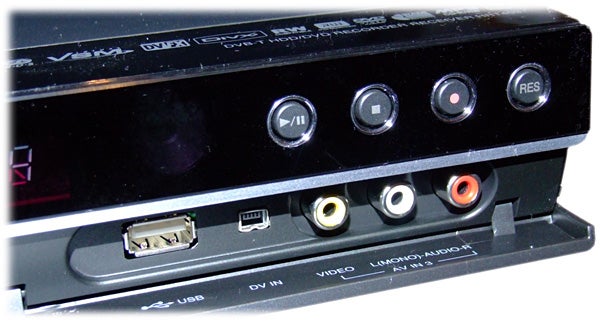 Around the back is a reasonable selection of sockets, including two SCART sockets (one in, one out, both RGB capable) plus component, S-video and HDMI outputs. Audio sockets include coaxial and optical digital outs and analogue stereo out, but sadly there are no digital audio inputs, which means you can’t listen to external sources through the system.


Unusually the system’s audio decoding and amplification are all located inside the subwoofer, so you have to pipe the digital audio signal from the main unit to the optical input on the back of the sub. The three speakers also connect to spring-clip terminals on the sub, plus there’s an odd connection labelled ‘Remocon’ which isn’t a new Transformers character but a connection that passes remote control commands from the main unit to the sub. 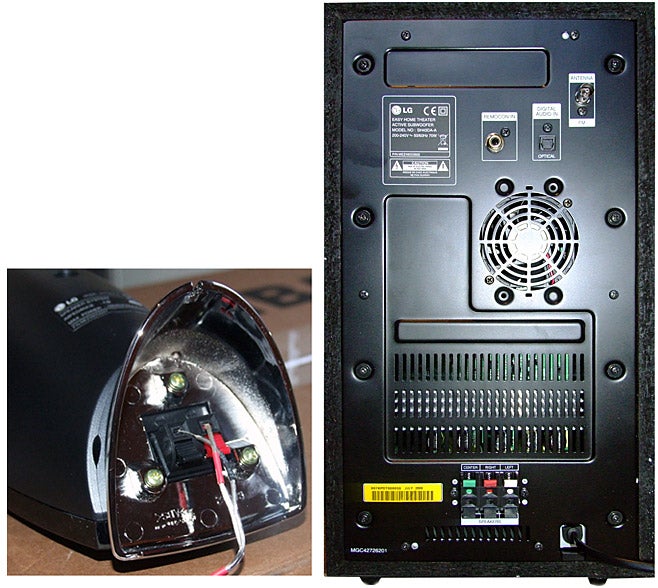 The subwoofer suffers from that unmistakable one-box system build quality, with a slightly plasticky feel to the front panel and a hollow sound when you tap it. But the gloss black finish, helpful LED readout and nifty controls (including a volume dial that you spin round with your finger) at least make it easy on the eye. The speakers also boast an effective combination of gloss black with silver trim, and the spring-clip terminals are neatly hidden underneath the stand.

As mentioned the system is positively bursting with features. First up, there’s 1080p upscaling from the HDMI v1.3 output, which is crucial given the amount of Full HD TVs now on the market. There’s also the obligatory virtual surround technology that attempts to fill the void left by the missing rear channels – in this case Virtual Sound Matrix (VSM), which creates a 5.1-channel ‘effect’ from the front speakers.


But the DVD/HDD recorder is where most of the action is. The 160GB hard-disk lets you record up to 463 hours of material, be it programmes from the built-in Freeview tuner, camcorder footage or signals from an external video source. Alternatively you can record onto DVD, and the LG supports any blank disc you throw at it so there’s no need to worry about which type to buy.

There’s an 8-day EPG on board, which makes it a breeze to set timer recordings, plus the Freeview+ logo on the box means there’s a range of convenient recording functions, such as the ability to record an entire series at the touch of a button or automatically detect when a programme is split in two and record both parts. Unfortunately these features are a pain to use due to the same pidgin English problems that blighted the RHT399H and DRT389H, but it’s still good to know they’re on board.


As with most LG digital recorders, there’s a comprehensive array of recording and editing features, including five levels of recording quality that make it possible to increase the available recording time, but annoyingly the only way to change these is by entering the setup menu. 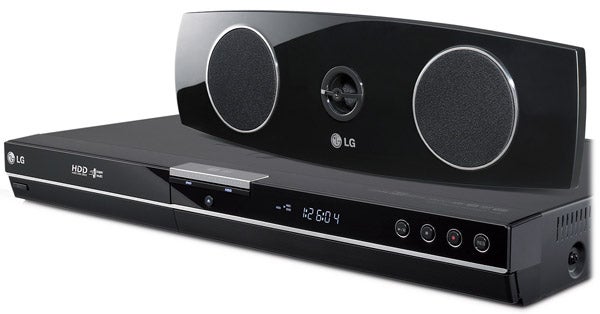 The availability of editing features depends on the type of disc being used, but potentially you can create playlists, delete a section, combine or split titles or fiddle about with chapters. Your recordings can also be dubbed from HDD to DVD (or vice versa) at high speed, while the Time Slip (a.k.a. chase playback) and Time Shift (a.k.a. pause live TV) functions also come in handy.


The unit can also be used as a hub for all of your content thanks to its ability to store DivX, MP3, WMA and JPEG files on the hard-disk. But those with more transient requirements can play these formats from CD, DVD or a memory device connected to the USB port.

Using the HRT403DA isn’t the hassle-free experience we hoped for; as the remote’s buttons are all over the place and some of the functions (particularly channel tuning) are a tad slow to respond. But the operating system does boast some very nice touches, such as the way the menus dissolve into each other and the clever Home menu that lays out all of the various functions in a bar across the top of the screen.


And in terms of performance, there’s very little wrong on the digital TV side of things. The Freeview tuner produces crisp and vibrant pictures, particularly with brightly-lit studio programmes, with impressive depth, sharp detail and reasonable block noise suppression. Slip the recording mode to XP and you can capture these images without any drop in quality. SP and LP modes deliver solid results too, but the EP and MLP modes border on the unwatchable – save these for emergency use only. 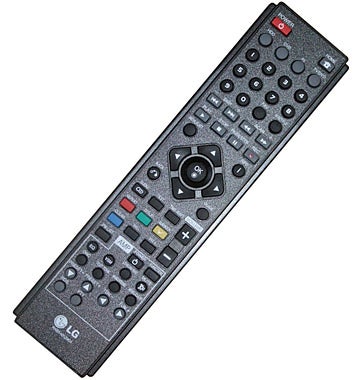 As a DVD player the LG isn’t bad either. It serves up ”The Return Of The King’s” epic visuals with a great deal of sharpness, both in terms of edge definition and fine detail retrieval, while colours are fulsome yet natural and blacks actually look black. It lacks the subtlety and refinement of a decent dedicated player but as one-box systems go this is a fine effort.


So far so good, but the LG slips up where so many all-in-ones have slipped up in the past – sound quality. There’s no denying that the system can deliver an energetic and surprisingly expansive soundstage, but sadly the sound is too harsh to enjoy at loud listening levels.

At times during ”The Return Of The King’s” big battle scenes, the brash, rasping treble had us wincing and reaching for the volume control, plus the sub offers little support at the bottom end, leaving the whole thing sounding more unbalanced than Kerry Katona. The harsh tone also has a negative impact on dialogue – Gollum’s voice, for instance, is delivered with far too much sibilance.


Music playback doesn’t fare much better, with CDs, MP3s and WMAs sounding thin and uninviting – none of which is helped by the sub’s lacklustre contribution.


The HRT403DA offers a phenomenal amount of features, leaving virtually no home entertainment stone unturned, and in most respects its performance is impressive – particularly when it comes to Freeview, recording and DVD playback. But sadly the system’s lacklustre sound quality is a real let-down and spoils what would have been a must-buy system – we expected better for this sort of money.