The LG Hom-Bot Square is a mixed bag of tricks on a performance front. Although it is arguably the most impressive robot vacuum cleaner we have used to date, it is still plagued by some of the traditional issues that continue to hold this fledgling market back from mainstream appeal.

Its general cleaning capabilities are extremely impressive and a welcome improvement over some robot vacuum cleaners we have trialled. Suction is a step above the crowd, meaning even dirt at the base of a deep pile carpet is tackled.

It’s impressively quiet, too, kicking out just 60db on full power. It’s considerably quieter than many conventional vacuum cleaners. Although the Turbo mode gives a noticeable boost to suction and cleaning prowess, it does however kick up the Square’s noise. 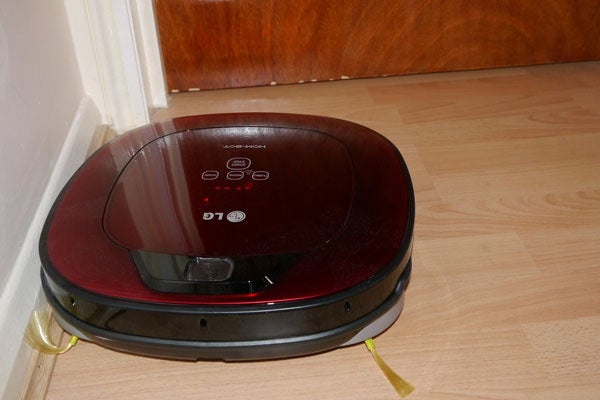 Unlike many robot vacuums, the LG Hom-Bot Square proved particularly adept at getting right into the corners of rooms. Its longer, 1.5cm brushes and Dual Eye cameras mean it is both precise enough in its positioning and cleaning ability to get dust and dirt out of surprisingly small spaces and crevices.

But its low ground clearance can become a real danger in cluttered rooms. Although the Square safely avoids big items of furniture, stairs and other unsighted drops, it is ignorant to cables and other small clutter. This issue caused charging phones to be pulled from desktops and lamps to be toppled during testing. A little care cab solves this problem, but it’s annoying all the same.

The LG Hom-Bot Square can struggle on deep, plush carpets and rugs, too, where its strong suction and low clearance cause it to become beached. It’s a trade-off, really. Anyone with normal carpets and hard floors benefits from better than average cleaning; anyone with thicker rugs and carpets will want to look elsewhere. 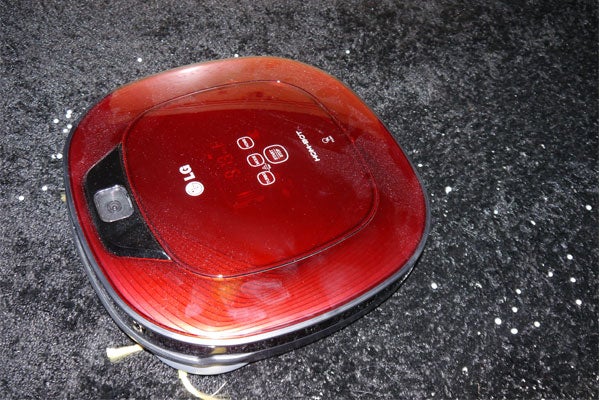 The Square’s claimed 100 minute battery life is a little bit overzealous, too. In reality we found the unit’s running time to be closer to the hour mark, a figure more than ample for most cleaning sessions. Impressively, the Square automatically returned itself to the base station when it sensed battery life was low. Returning to the base station, however, can be a slightly slow and laborious task, with the robot repeatedly doubling back on itself. 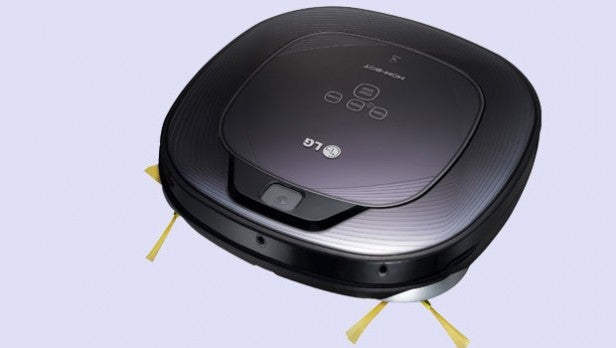 Should I buy the LG Hom-Bot Square?

If you have your heart set on a robot vacuum cleaner, then this model comes recommended over most. The LG Hom-Bot Square is our current pick of the robotic vacuum options and marks a step forward in this category.

It is not cheap though, but then emerging technologies never are. Sadly, it will still not fully replace your manual vacuum cleaner either. An ideal addition to your conventional vac, the Square will keep on top of daily dirt, but will still require you to break out some manual labour from time-to-time. If you truly detest the thought of picking up a traditional vacuum cleaner, you may want to plunge your money into hiring a part-time cleaner instead.

The Square comes boxed with plenty of spares (including filters and bristles) all of which make the wallet-denting £450 price tag marginally more manageable. With the novelty of the device inevitably wearing off, those already questioning the robot route might be better suited to the Dyson DC50 or Gtech AirRam, both of which are more reasonably priced.

Although arguably the best robot vacuum cleaner we have seen to date, the LG Hom-Bot Square is not without its issues. Yes, having an automated cleaning minion is the futuristic dream, but when you have to tidy up after the little blighter, some of the novelty wears off. It is not an out-and-out replacement for your traditional vacuum just yet, but a satisfactory assistant that will keep on top of the basics.