Integrating a Blu-ray player into a soundbar was the next logical step for the technology, and typically the Koreans were first to take it. In November we cast our eye over the Samsung HT-BD8200, a good-looking, feature-rich all-in-one that does a great job with hi-def discs and DVDs, but now it’s the turn of fierce rival LG to show what it can do.

LG HLB54S soundbar not for you? Check out our round-up of the best soundbars to buy


LG’s debut soundbar is the HLB54S, which at around £600 is surprisingly pricey for such a (usually) budget-conscious brand, but given LG’s track record you know it’ll be absolutely bursting with state-of-the-art features and hopefully offer great performance to boot. On that score the signs are good, given that it’s been tuned by LG’s audio go-to-guy Mark Levinson and claims to offer 430W of audio power.


The HLB54S is one fine-looking soundbar. It’s covered in glitzy touches like the silver trim surrounding the disc slot, the gloss-black finish on the sloping top panel and a row of touch-sensitive buttons that give off a dainty little ‘ping’ when pressed. We also like the massive illuminated display that shines through the front speaker mesh, allowing you to read it from anywhere in the room.

However, it’s not the most practical soundbar in the world. It’s delightfully slim, but this is offset by a depth measurement of 189mm, which makes it more awkward to accommodate than most soundbars. And it’s not really designed to be wall mounted either, which we thought was the point of a soundbar – if you want to sling it on the wall, you’ll need to put a shelf up first.


Still, the HLB54S gets back in our good books with a rear panel that’s teeming with sockets. Of greatest interest is the sight of two HDMI inputs, which will be welcomed by anyone wondering how their socket-strapped TV will accommodate a growing collection of HDMI-equipped kit. The answer is simple – hook them up to the LG and you can switch from source to source using the system’s remote.


Among the other connections are a socket for the supplied iPod dock (generous), composite video output (useless), one optical digital audio input (handy for Sky boxes) and a generic analogue minijack input for any MP3 player. Completing the line up is an Ethernet port to support the Blu-ray deck’s BD Live compatibility.

But this socket will be rendered redundant if you own a wireless internet router, as the HLB54S comes equipped with built-in Wi-Fi support (802.11 b/g/n), just like the company’s BD390 standalone player. A smart move it is too, as it might actually encourage you to check out the BD Live content on your new Blu-ray discs as opposed to ignoring it because you can’t be arsed to rig up an Ethernet cable. The unit’s firmware can also be updated wirelessly.


Another of the LG’s major selling points is the wireless active subwoofer, which you can place anywhere in the room (within reason) without having to hide the cable. Perfect! And there’s no tricky setup involved either, simply plug it in and it pairs up with the soundbar as soon as it detects a signal. It’s not the most substantially built subwoofer in the world, but the matching gloss-black finish is as reliably alluring as ever.

The rest of the HLB54S’s features left us well and truly flabbergasted. Built-in Wi-Fi, a wireless sub and a supplied iPod dock would be enough for most systems, but here they’re merely an hors d’oeuvre. You’ll also find a USB por, concealed under a flap next to the disc slot, which allows you to connect an external USB HDD or flash drive and play MKV, DivX HD, MP3, WMA, XviD and JPEG files. Thanks to the unit’s DLNA compliance, the same file types can be streamed from PCs or mobile phones over the Wi-Fi connection, and you can even stream the billions of videos on YouTube to your TV.

Inside the soundbar is a 4.1-channel speaker configuration – two fronts and two surrounds at 70W per channel, with 150W going to the sub. The unit decodes Dolby True HD and DTS HD Master Audio, plus it can upscale DVDs to 1080p. True to form, LG has also included a range of sound modes, including Natural, Bass Booster, Drama, Sports, Game, Concert and Music ReTouch, the latter designed to enhance compressed music playback. All of these colour the sound in various ways, so it’s best to use the Bypass mode for movies.


The biggest bum note is that the HLB54S is not equipped with the built-in memory needed to access BD Live online content. Try to access it without a USB stick connected to the front port and it simply won’t work. We loaded up a 2GB stick and tried out Terminator Salvation’s BD Live portal – there was a lengthy wait before it linked up to the Sony mainframe (a good eight minutes) and the content is sluggish to stream or download, but this experience is common to most of the BD Live players we’ve tested at typical broadband speeds. 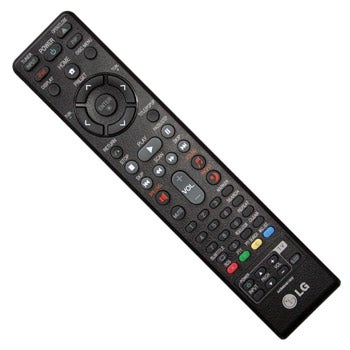 The operating system sticks with the tried and trusted LG formula, based around a welcoming, icon-driven Home menu that provides easy access to all of the main functions, be it Blu-ray, media streaming, YouTube, USB or the Setup menu.


The latter presents its many options with a healthy dose of common sense, using large text and minimal submenus, but the fact that you can’t access it without stopping any playing movie is a pain.


Hooking the LG up to a network is a lot easier than the Samsung HT-BD8200. An on-screen wizard takes you through each stage and asks questions about your setup, then a responsive virtual keyboard lets you punch in your encryption key with no hassle. Streaming content is a cinch too. Choose your server from a list, then it presents all your content in the relevant folders, much as it would appear on your PC – just make sure your computer has been set to allow media sharing.


Optimising the system is a simple process of pressing the speaker level button and adjusting the front L/R, surround L/R and woofer levels. The remote used to perform all this is a bit too cluttered and lacks a backlight, but at least some attempt has been made to separate out the playback and menu control keys.

Just as we discovered on the BD390, the system’s disc loading speed can be ultra quick, taking just 30 seconds to load Spider-Man 3, but Terminator Salvation took a sluggish 55 seconds to load. With the latter, the picture quality on offer is excellent. The harsh, dusty detail of Earth’s post-apocalypse landscapes is presented in dazzling clarity, likewise the mechanical minutiae of the CG robots that give our human heroes such a hard time. It’s a superb picture, full of subtle shading and impressive contrast levels that make the frequent dark scenes easy to discern. It also nails the Silicon Optix HQV disc, suffering no major slip-ups with any of the tests.


But it’s with audio that the LG excels most. We slid the volume up to near maximum and zipped to the scene in chapter 6 where the huge robot attacks the humans, and were mightily impressed by the system’s phenomenally rich and powerful sound. The robot’s thumping footsteps and massive explosions get the whole room shaking, while the non-stop barrage of bangs and crashes are delivered with attack and intensity. 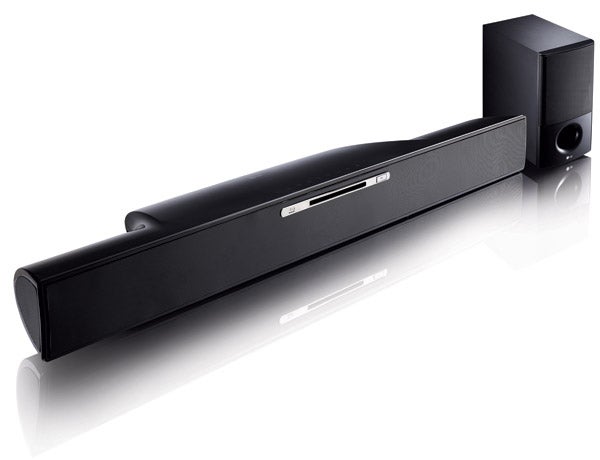 And when Christian Bale scraps with a Terminator in chapter 2, the sound of bullets hitting metal are fierce and convincing without jarring the eardrums. The unit’s surround channels also do a fine job of projecting themselves far and wide, resulting in a soundstage that doesn’t completely envelop but does achieve a convincing sense of space and scale.


Inevitably with a one-box product there are a few flaws to highlight. The sound of jet planes racing past the camera is a bit raspy, and while the sub is undoubtedly powerful, there’s precious little variation, precision or dexterity behind its bass notes – everything just comes out as a boomy rumble. But on the whole, the pros definitely outweigh the cons.


And with music it’s much more sophisticated than we expected, handling Corinne Bailey Rae’s jazzy rendition of Since I’ve Been Loving You with a decent sense of timing and lots of detail – you can clearly hear the twanging of the double bass strings, while the tinkling piano high notes are clean and crisp.


Let’s cut to the chase – if you’re after a Blu-ray soundbar, this is the one to beat. With tons of features, including built-in Wi-Fi, HDMI switching and MKV playback, the HLB54S is more appealing on paper than the HT-BD8200, plus its sound quality has a bit more power and presence to it.


Yes it’s slightly more expensive than its Korean counterpart – in fact it’s expensive full stop – but you are getting a lot for your money. Just be sure to take the lack of built-in BD Live memory, the wall-mounting difficulties and its sonic flaws into account before brandishing the credit card.