If there was an award for the flat-out maddest AV product at this CES 2013, then it would surely be bagged by LG’s gloriously named Hecto Laser TV Projector.

From a distance, Hecto just looks like A.N.Other massive TV. However, looks in this instance can be very deceptive indeed. For the 100in pictures the Hecto produces aren’t coming from an LCD, LED, OLED or plasma panel, but from a projector. Or to be precise, a short-throw laser projector with an exceptionally small throw distance of just 22in (around 55cm).

Get close and personal with Hecto, and its full story becomes clear. What you get is a 100in wall-hanging screen and a fairly meaty, gloss black-finished laser projector designed to sit beneath the centre of the included screen’s bottom edge and use a short-throw projection system (comprising an array of internal mirrors) to fill the 100in screen even when the projector’s just 22in away.

Past experience suggests that short throw projector solutions like this can be a serious faff to set up, and tend to make it nearly impossible to get the edges of images looking completely straight. However, LG assures us that by keeping the 100in screen and 22in projector distance constant no matter where the Hecto might end up, it really isn’t a taxing installation at all. Obviously we weren’t able to put this claim to the test, but we can say that the edges of its images did indeed look perfectly straight, with no sagging or bulging at any point.

There’s a stereo speaker system built into the Hecto Laser TV projector, but LG has also created a rather fetching soundbar and subwoofer external audio solution if you feel like improving the audio part of your performance. And from what we heard at the CES, we’d strongly recommend that you try and get this soundbar/sub option, as – unsurprisingly – it delivers a soundstage much more in keeping with the scale of the Hecto’s 100in images than the speakers built into the projector.

The Hecto projector ‘only’ enjoys a Full HD (1080p) resolution, rather than the Ultra HD resolutions proudly being displayed by many of the LG screens around it, so it was impossible not to notice how much softer its pictures look than those Ultra HD ones. Once we’d accepted that compromise, though, we had to admit that the picture was reasonably detailed and sharp by Full HD standards.

Similarly, while the LG Hecto Laser TV Projector’s pictures looked far less bright and richly coloured than those of all the LED and OLED models around it, they also looked quite a bit more punchy than you would expect to see from a typical projection system running in the sort of extreme ambient light levels generated on the CES show floor.

This ability to still be watchable with ambient light around is, of course, a pretty essential aspect of the Hecto’s potential appeal, as it’s clearly designed to be used in a relative normal living space complete with likely ambient light, rather than a dedicated, dark home cinema room.

Pictures appear to enjoy a decent amount of contrast too (LG claims a 10,000,000:1 contrast ratio, though we weren’t able to test black level response accurately on account of the amount of ambient light the Hecto was being shown in), and colours look subtly blended and reasonably natural. 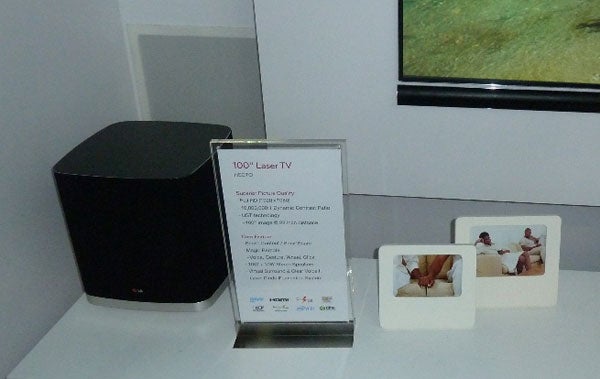 The Hecto’s laser system offers another major advantage over ‘regular’ projectors. With most home cinema projectors, you need to replace their bulbs every few years depending on usage. Like the few LED-based projectors out there though, the LG claims that its Hecto will last a whopping 25,000 hours. Heat and energy consumption are also reduced.

There are problems with the LG Hecto Laser TV Projector, though – problems beyond the lack of brightness and colour saturation versus normal big-screen TVs noted earlier. First, very bright areas look a bit flared out and short of detail. Second, the finish of the screen or the nature of the laser projection – or a combination of the two – can make the surface of some parts of the image seem to shine a little.

Finally in the niggle department is the fact that the Hecto will cost a cool $10,000 when it launches in the US and Canada in the next few months. This seems a rather high price when you think about all the lovely new 4k and OLED technology that such an extravagant sum will be able to get you by the time the year is out.

No UK launch has yet be confirmed for the LG Hecto 100in Laser TV Projector, as the company is still trying to decide whether to release it on this side of the Atlantic. But while the system is certainly an imaginative attempt to take the hassle out of getting really big images in your living room, we suspect it might prove just a bit too bonkers for European tastes.