The HB354BS marks LG’s entry into the world of Blu-ray systems and is one of two one-box packages hitting the market in May. This one is a 2.1-channel system, which means it’s designed for people who have neither the space nor patience for a full 5.1 setup, but despite the lack of surround sound its 350W audio output should deliver a more fulfilling home cinema experience than your average TV speakers. The step-up HT954PB features a 5.1-channel configuration with ‘Champagne’ style speakers, and bumps the power up to 1000W.


In the box you’ll find a combined Blu-ray player/receiver unit, two front speakers and a passive subwoofer. The surprisingly chunky main unit is styled in a snazzy gloss-black finish, jazzed up further with a volume dial surrounded by a ring of blue light and a row of touch-sensitive buttons. It’s attractive and fairly well built, but falls foul of the hollow, plasticky feel common among one-box systems.

Bang in the centre of the fascia lies one of the system’s killer features – an iPod dock. It slides out when you press the panel in the centre and supports all types of iPod, including the touch, plus you can browse through songs using the onscreen GUI. You’ll also find a USB Plus port on top that supports playback of movies, music and photos.


Around the back we’re pleased to discover two HDMI inputs (and one output), which allow you to channel two other sources though the system, such as a PS3 and Sky HD box. That way, you can improve the sound quality for TV viewing and gaming, and you only take up one HDMI input on your TV. Handy. 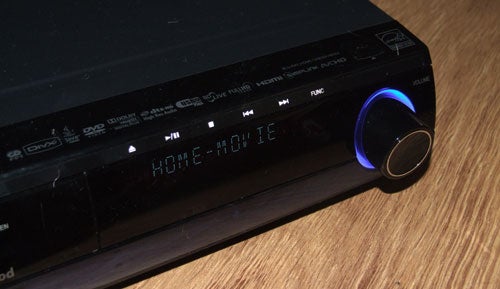 The generosity continues with the inclusion of optical, coaxial and analogue audio inputs, plus component and composite video outputs. The connection roster is completed by an FM antenna input for the built-in radio tuner, a 3.5mm minijack input for MP3 players and an Ethernet port to take advantage of the system’s Blu-ray Profile 2.0 capabilities.


The front speakers are gorgeous, with a glossy black finish and oval shape that will attract plenty of attention. Each one is perched on a silver horseshoe-shaped stand and plugs into the back of the main unit using flimsy springclip terminals, another sign of all-in-one cost cutting. As for the subwoofer, the matching gloss-black finish makes it look fine from a distance but on closer inspection it’s worryingly light and hollow – although at least it’s sensibly mounted on rubber feet to minimise vibration.

Because the Blu-ray player is Profile 2.0 you can access BD Live extras, but it also supports YouTube video streaming as found on LG’s standalone BD370. The feature isn’t found on the first batch of systems (from which our sample was taken) but a later firmware update will enable it.


Elsewhere on the feature list is Dolby TrueHD, Dolby Digital Plus and DTS HD Master Audio decoding, the impact of which will no doubt be reduced by the 2.1-channel configuration but you should be able to hear the increased sonic resolution offered by these formats. 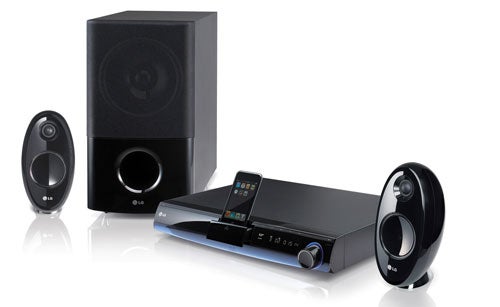 The rest of the feature list is pretty decent – the system upscales DVDs to 720p, 1080i and 1080p; plays DivX, MP3, WMA, JPEG and AVCHD files; features a range of sound modes designed for different types of material (News, Drama, Sports, Game and Concert); and offers a Bass Booster mode that does exactly what it says on the tin. Our advice? Stick with the ‘Bypass’ mode. A separate Night mode boosts the sound quality at lower volumes and dims the front panel lights.


The system is easy to use thanks to the superb interface, which revolves around the eye-catching Home menu – your central access point for all supported media. It offers a choice of Movie, Music, Photo and Setup (and eventually YouTube) and each one is represented by a full-colour graphic. The remote is thoughtfully laid out with large icons drawing attention to the most important buttons, although it’s a tad cluttered towards the bottom.


Like many of LG’s home cinema systems, the HB354BS has been specially tuned by audio guru Mark Levinson, which could give it the edge over rival 2.1-channel systems when it comes to performance. And for once, it actually does – when you play a Blu-ray disc, the most striking thing is how naturally powerful and dynamic the system is. Although the volume goes up to 40, we rarely felt compelled to push it over 20 – but if you do, the speakers show few signs of strain.

We started our audition with Mamma Mia!’s DTS HD Master Audio soundtrack, and we were blown away – when Meryl Streep breaks into the title track, it soars out of the speakers with such gusto that you can’t help but get swept along by the sheer energy of it all, regardless of your attitude towards this movie.

The sound is sweet and crisp with loads of top-end detail, courtesy of the smooth and well controlled treble. Dialogue is similarly clear and open, allowing you to hear Pierce Brosnan’s voice in all its flat, awkward detail. It’s a genuine surprise to hear such assured sound quality from a one-box system, although the lack of dedicated surround and centre channels does reduce the overall impact somewhat – we can’t wait to hear what the 5.1-channel HT954PB has to offer.


We also took Indiana Jones for a spin and its Dolby True HD track is also presented with plenty of detail and vitality. Harrison Ford’s mumbled dialogue, delicate background ambience, sudden crashes and gunfire are relayed with admirable attack and clarity. If there’s a weak link in the chain it’s the sub, which isn’t quite deep or punchy enough to really knock your neighbours for six, but it still manages to lend a solid, well-integrated foundation to the action.

The system also delivers excellent picture quality, which is comparable to that of the BD370. Mamma Mia!’s bright, colourful visuals look sumptuous, oozing with rich, noise-free colours (the turquoise sea almost sucks you into the screen) and crisp detail. Indiana Jones is also full of scenes that demonstrate the system’s superb detail handling, from the sharply-rendered swarms of ants to the detail inside Orellana’s dingy tomb, a sequence that also reveals top-notch shadow detail and contrast.


We like surprises here at TrustedReviews, and the HB354BS is an extremely pleasant one. We admit that we didn’t have high hopes given the system’s inevitable build quality issues, but its sound quality is more potent and poised than expected, injecting movies with an irresistible sense of excitement despite the lack of centre and surround speakers. Add to that some excellent hi-def picture quality and you’ve got yourself a very satisfying 2.1-channel system.


Because we got one of the first samples, there was no price information available at the time of writing so it’s hard to assess its value for money. But knowing LG it’s bound to be competitively priced – and after hearing its performance, the press release’s claim that it produces “a sound more typically found in systems three times the price” is an encouraging sign. For now it gets a Recommended Award on the presumption that LG will make sure the price is keen.