Being a fairly powerful mobile phone platform, Google’s Android is generally seen on high-end smartphones like the HTC Hero, Samsung Galaxy, and Motorola Milestone (though we have seen a few low cost variations along the way). It’s thus a bit of a surprise that LG has chosen to use a relatively low cost device for its first foray into the Android market. Thankfully this hasn’t resulted in too many compromises and this is still a very desirable handset.


Foremost among this phone’s standout features is its slideout keyboard that is one of the best we’ve ever used. It incorporates five lines of large spacious keys, meaning all letters and numbers, as well as some additional functions like directional keys and quick search, can be accessed without needing to go to secondary functions. This is a very rare feature even on the most expensive handsets, so to find it on an apparently low-end device is quite incredible. Neither is the keyboard let down by its action which, though shallow, has a discernible break making it easy to tell when you’ve hit a key. 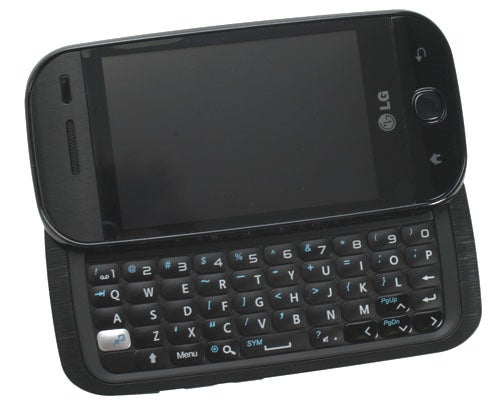 Another feature we’re very glad to see is a proper headphone jack on the top of the phone. This makes it easy to substitute your own choice of headphones for the ones provided, although these are better than some of the bundled efforts you get, thanks to reasonable external noise reduction and decent bass reproduction. That said, you could still find far better third party headphones for around £30. To accompany this there’s a quick launch button on the right edge of the phone for going straight to the music player. Internal storage is just 150MB so you’re somewhat limited as to what/how many apps you can install but a microSD slot also on the right edge means its easy to add lots of multimedia to the phone and do file transfers.

Also residing on the right edge is the camera button while the top is home to the combined power and screen-lock button. On the left is a microUSB socket, which is used for charging the phone as well as doing data transfers, and the volume rocker.

The button arrangement on the front is slightly odd as the Home and Back buttons are touch sensitive. Not only does this seem a bit pointless but the central selection button isn’t touch-sensitive making for an inconsistent feel when interacting with the phone. For the most part though, the GW620 feels nice to use with all its buttons falling within easy reach and being logically placed.

Another standout feature is the camera, which has that most uncommon feature for an Android phone, a flash. Admittedly it’s only a single LED so only has a range of a couple of metres (as opposed to a Xenon flash that at least doubles this range) but it’s better than ‘nowt’. The camera itself, which can resolve 5-megapixels and has autofocus, is a bit better than what you get on most smartphones but still falls markedly behind dedicated camera phones (let alone proper compact cameras) and is really only good for occasional snapshots. 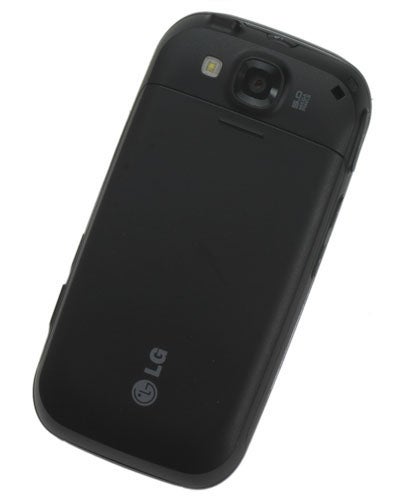 In terms of aesthetics, this is a rather cluttered looking phone thanks to all those buttons though the matt black back, brushed metal top section and glossy black screen surround all combine to give it an understated and functional feel. Unsurprisingly that keyboard does make this a fairly chunky device at 15.9mm thick but it’s by no means a brick and is noticeably slimmer and shorter than the iPhone. 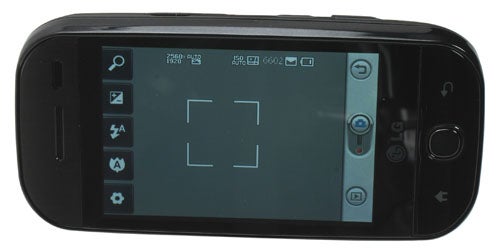 So far this is all pretty impressive stuff but for us this phone does have one major failing – it uses a resistive touch-screen. This means the surface of the screen is soft and thus very scratch prone. Moreover, the bit of pressure required to elicit a response makes this less responsive than capacitive touch-screens, which can detect even the slightest glance. It also means there’s no support for multi-touch so typing on the onscreen keyboard is very slow. Now we appreciate some people do prefer resistive screens as you can use them with gloves on and can use any old pointy item as a stylus. However, for most situations we still feel capacitive screens are better. 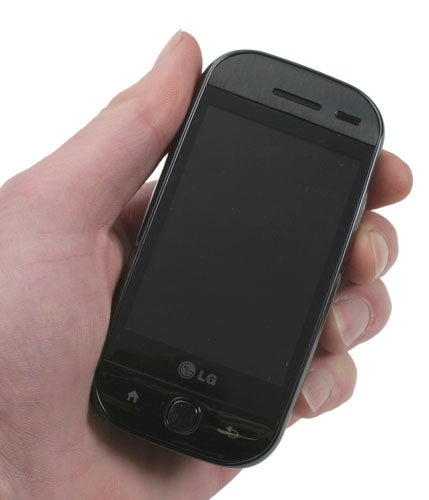 To view, however, the screen is perfectly adequate thanks to a typical resolution of 320 x 480, 3in size, and ample brightness and sharpness. Viewing angles aren’t quite as good as you get on AMOLED screens but are still absolutely fine for everyday use.


Moving onto software and this phone continues to impress us. For the most part this is simply due to Android being a pretty decent mobile phone platform that is intuitive to use, has a great web browser, handles email well, and excels at all the phone basics too. However, LG has made some positive additions that help this phone stand out from the crowd.

As is ever more common, this phone integrates social networking sites like Facebook, Bebo, and Twitter, allowing you to merge contacts on the phone with those on these other services. Coming under the Social Networking Services app, this makes it really easy to keep track of all your communications with a contact no matter what method they choose to chat. The phone can also auto tag photos of your friends after it has learned what they look like from existing photos and you can call a friend simply by tapping on a tagged picture of them. SMSs are also threaded so its easy to keep track of conversations. 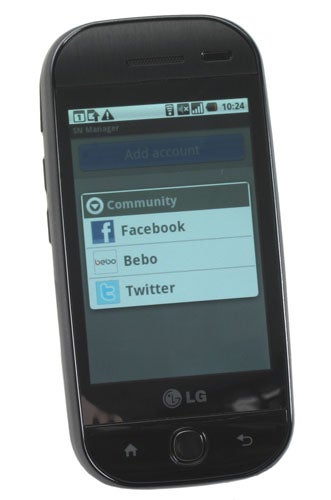 LG has also added a theme that makes this phone look like the rest of LGs range. In particular, a row of shortcuts to dialler, contacts, message folder, and apps page runs along the bottom while the icons in apps page are sorted into groups by type; communication, multimedia, and utilities, Google, and downloads. You can revert back to the standard Android look and feel if you like, though. 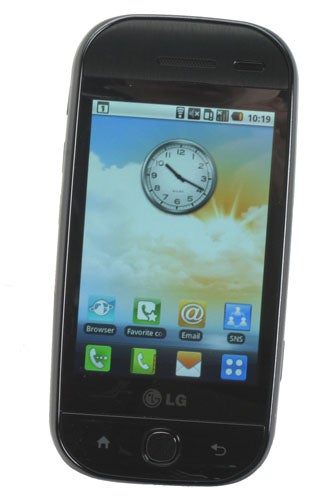 Thanks to the Android Marketplace, it’s easy to cram this phone with all sorts of apps and games. However, we did find the 500MHz processor a little sluggish even in day to day use so fancy games or sat nav apps, for instance, might struggle. 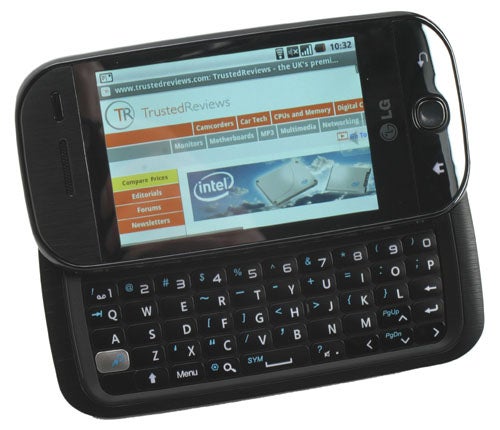 Call quality testing highlighted no particular shortcomings while the speaker was surprisingly powerful though not up there with the best like that on the Blackberry Bold 9700. Being a large touch-screened phone we weren’t expecting miracles when it came to battery life and the GW620 didn’t disappoint, so to speak. We generally got about a day and a half to two days out of a single charge, which is about typical for such a device.


The GW620 is available for free on contract through T-Mobile and Virgin Media for as little as £20 a month and can be bought SIM free for £299.99. So, while relatively low cost, this certainly isn’t a rival to the T-Mobile Pulse for instance. Indeed it seems to us that LG might have shot itself in the foot trying to save money on this device when it could’ve just added a faster processor and better touch-screen and had a device that rivalled the best smartphones.


All told, the LG GW620 IntouchMax is close to being the perfect Android smartphone – assuming you want a physical keyboard. Its keyboard is superb, it has all the features we’d hope for, all laid out as well as we’ve seen. Sadly, the package is let down by the use of a soft resistive touch-screen and slightly sluggish operation. 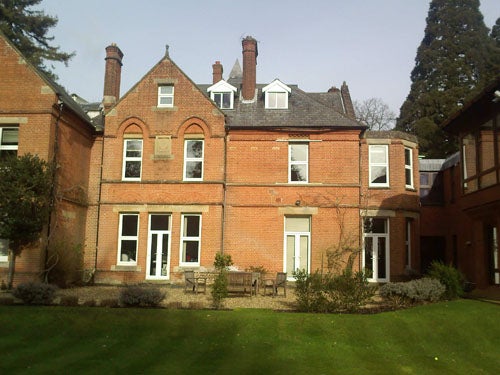 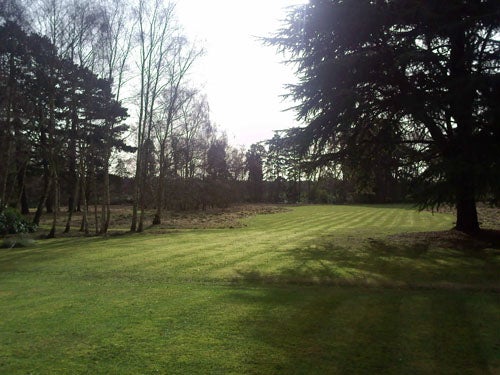 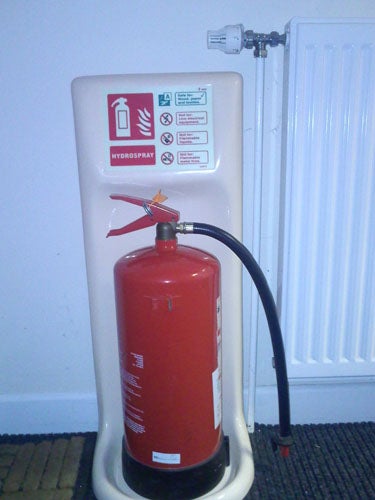