How good is the LG G8’s display?

For the longest time, LG has been using LCD panels on its flagship smartphones, which seems counterintuitive when you consider that the company is a purveyor of some of the best OLED televisions in the business.

Why LG didn’t promote the same screen technology across its smartphone line is unclear, especially when its rivals – such as Samsung and Apple – have often been applauded for the OLED screens they use on their phones.

No matter: the LG G8 finally makes the jump to OLED while retaining a lot of the extra technologies that made the LG G7‘s LCD so great.

For power management purposes, the phone displays content at closer to Full HD resolution by default, but you can force its hand to display at the highest resolution available from within the Settings menu.

The screen is also supposed to adhere to the full DCI-P3 colour space, as well as supporting HDR (high-dynamic range) standards such as Dolby Vision and HDR10.

By default visuals are set to “Auto”, but you can switch the display profile to one of six other options including Cinema and Expert for a more tailored experience. It would be nice to know what exactly the phone is doing when these different profiles are active – but, like switching through Instagram filters, you only have the shift in colour temperature and balance to imply what changes are being made.

Adding to the complexity, the G8 also totes a “True view” toggle, which similar to Apple’s True Tone technology, automatically adjusts colour temperature based on the ambient light present in an attempt to offer a consistently accurate viewing experience. I preferred the slightly warmer finish this placed on the screen, which felt easier on the eyes. If you don’t like the idea, it’s simple enough to switch off from within the Settings menu.

LG has always prided itself on the brightness of its smartphone displays. Most users find  that comfortable viewing in most situations is around 200 nits of brightness. The G8’s display is rated as being able to reach 600 nits at maximum, which you’d likely want to use when viewing the phone in particularly bright surroundings. 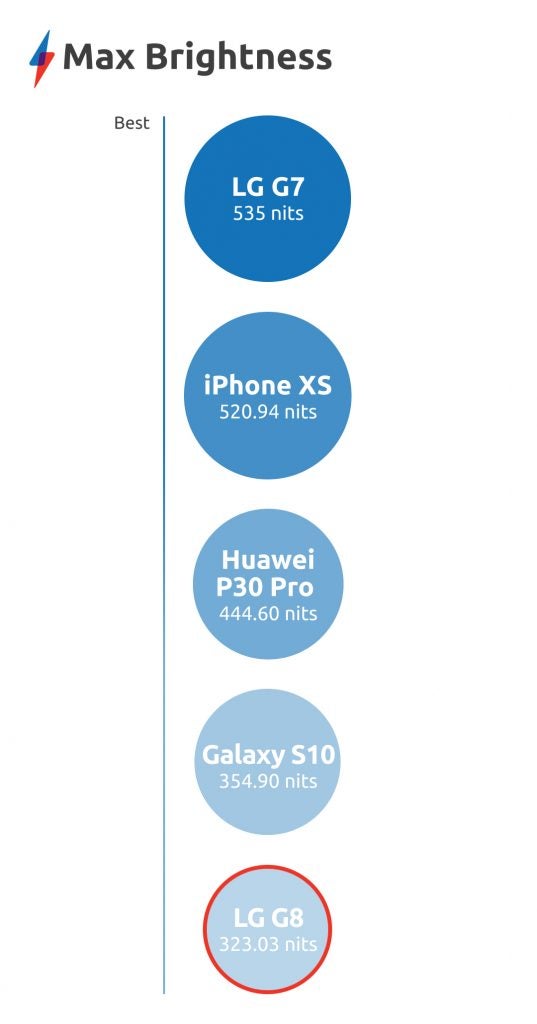 In testing, the phone actually hits below its promised peak, but is still comfortably legible outside based on my real-world experience with it.

I’d have welcomed greater granularity with the brightness control, however, since there’s quite a jump from no backlight to its lowest possible setting.

One quality of OLED displays that makes them desirable over LCD panels is the black levels they can achieve. As each pixel emits its own light, when showing true blacks, the panel can simply be switched off and stop producing light entirely. 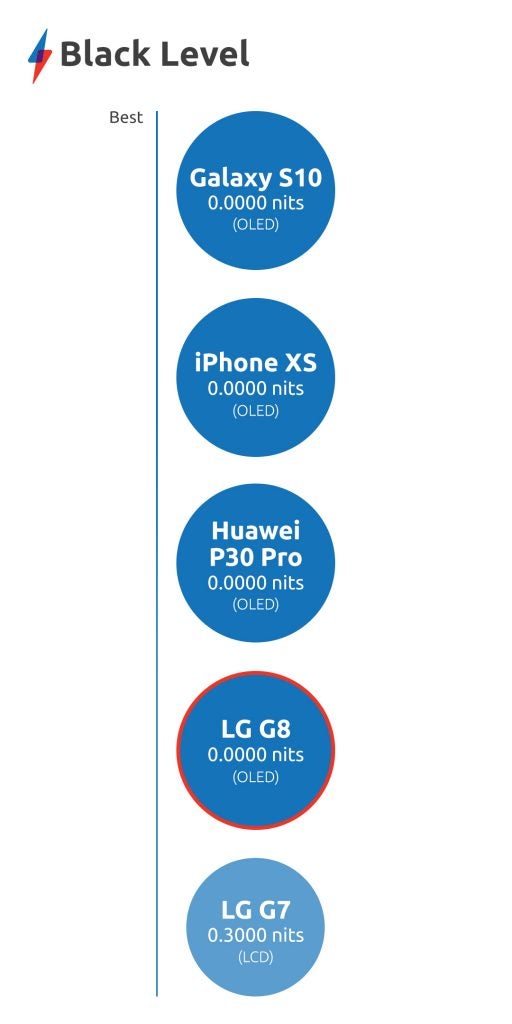 Not only does this ensure the deepest blacks possible – thus the G8’s score of 0.0000 cd/m2 – but it also helps with power consumption and efficiency. This also accounts for the reason that all OLED phones achieve the same score.

By comparison, since LCD panels have to be backlit, you can’t isolate the light output of individual pixels. As such, even when they’re showing black, they’re still emitting light.

As a result of the use of OLED tech, and based on the fact that black levels are subsequently zero, the LG G8 – like its OLED-toting rivals – achieves a contrast ratio of infinity:1.

Contrast ratio measures the distance between the darkest blacks and the brightest whites that a display can produce. So with the phone achieving perfect blacks, it stands to reason that its ratio can’t be anything other than inf:1.

Ideal colour temperature for balanced viewing is rated at 6500K, so the LG G8’s natural value of 7345K pushes it onto the cool side. Thankfully, the phone’s “True view” feature takes into consideration the external lighting conditions and adjusts colour temperature accordingly to appear as balanced and as accurate as possible.

There’s also the matter of colour gamut compliance. There are a variety of colour spaces we test for, comprising sRGB, Adobe RGB and DCI-P3.

The G8 nails the standard sRGB gamut with 100% compliance, while the now-dated (but still popular with artists and photographers) Adobe RGB gamut is the least fulfilled. LG quotes the G8’s display as 100% compliant with the DCI-P3 colour space – and, while imperfect, the G8’s actual score of 97.1 % is still promising, not to mention it supports a capable 100% of the gamut volume within its possible output.