There’s very little to choose between top range Android phones these days. They almost all pack Qualcomm’s latest system on a chip and it’s no surprise that the LG G3 follows suit.

The quad-core Snapdragon 801 runs at up to 2.5Ghz and is backed up by 2GB or RAM for the 16GB version and 3GB RAM for the 32 GB one. Preliminary reports suggest the extra 1GB of RAM makes little difference to performance.

Just to confuse matters a little the Snapdragon 801 comes in a few variations, here we have the faster one that the Galaxy S5 uses. It is 200Mhz quicker than the variant in the HTC One M8 and the Sony Xperia Z2, which means that it should perform better in our standard benchmark tests. However, this is not the case. 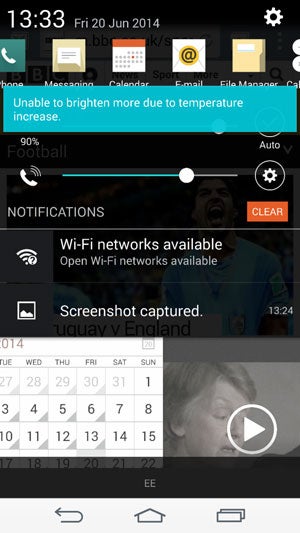 The LG G3 scores 2,425 in Geekbench 3, a fair bit lower than the 2,908 of the Galaxy S5 and 2,840 of the HTC One M8. It also trails more than 10 per cent behind the other two in the 3DMark Unlimited benchmark with a score of 16,382. We’re not quite sure why this is the case. We know that HTC has ‘optimised’ the HTC One M8 to perform well in benchmark tests so we always take its results with a pinch of salt.

While we have had no confirmation on this there is the possibility that LG are holding a little back from the processor to ensure the LG G3 doesn’t overheat or use too much battery. During our testing we were stopped several times from upping the brightness of the screen to 100 per cent with the message “Unable to brighten more due to temperature increase”.

It may be that LG has opted for keeping the internal temperature down over eking every last bit of power out of the processor. If so it’s an admirable sentiment, we have often found stability issues with phones that overheat and we’d take a small performance hit in exchange for the boost in reliability.

In real world use you’ll notice very little wrong with the LG G3’s performance. Aside from the occasional tiny UI stutter, which happens with every Android phone we’ve used.

The LG G3 is slick and powerful. Heavy duty 3D games like Asphalt 8 play smoothly and look stunning on that amazing QHD screen.

The LG G3 has resolved one of the main complaints buyers had of the LG G2. It now comes with a microSD card slot that accepts cards up to 128GB in size. This means that it makes little difference whether you opt for the 16GB or 32GB model, aside from RAM. You can always add extra storage later.

The full host of wireless connectivity we’ve come to expect from high-end phones is present and correct. There’s a wide range of 4G connectivity bands, as well as Wi-Fi (802.11 a/b/g/n/ac) Bluetooth 4.0 and NFC. It also comes with an Infrared blaster and one of the more usable IR remote apps we’ve experienced. Setting up our home entertainment system was quick and slick and it’s one of the rare IR apps we actually find ourselves using when we are too lazy to track down a remote. 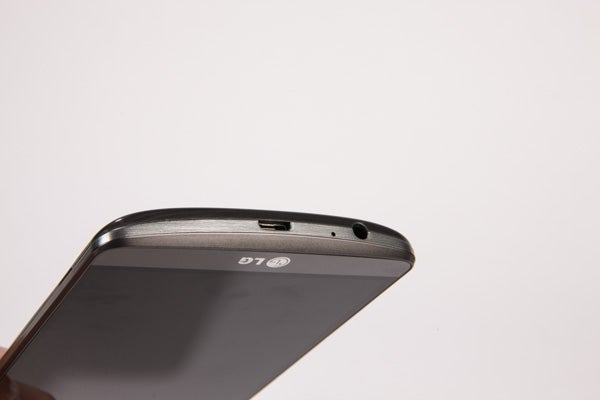 While Samsung opted to kit out the Galaxy S5 with a microUSB 3.0 port the LG G3 has a more standard microUSB 2.0 one. This means you won’t get the same blistering data transfer rates, but in all other respects the LG G3’s microUSB port is comprehensive. It is Slimport compatible, which means you can connect it to your TV with an adapter, and is USB on-the-go enabled so that it can read from USB storage devices.