The LG G Pro 2 is a large-screen phone. Its display is 5.9 inches across, slightly larger than the Samsung Galaxy Note 3‘s one and a good half inch bigger than its predecessor the LG Optimus G Pro‘s display. We took a look at this giant mobile at MWC 2014, where it was first shown off. 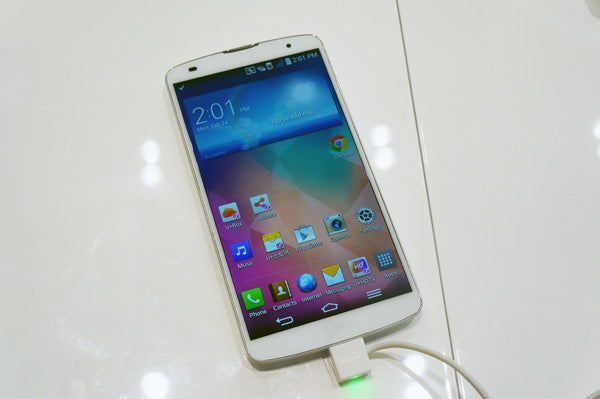 The ‘Pro’ title may make you assume the LG G Pro 2 has some professional applications the LG G2 lacks, but they’re fundamentally quite similar phones. This one is simply bigger.

A key thing to note is that the LG G Pro 2 does not have a digitiser stylus like the Note 3. It’s more a traditional phone.

It’s a plastic phone, too. The rear is textured for a bit of extra grip but, like the LG G2, it does end up feeling slightly cheap and plasticky. And this will not be a particularly cheap mobile. 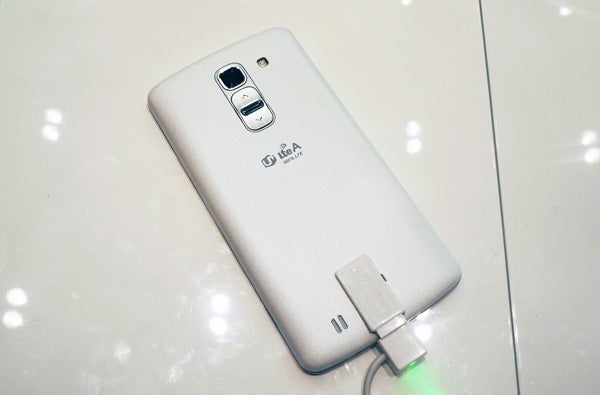 The LG G Pro 2 does look snazzy from the front, though. It gets rid of physical soft keys and has a slim bezel to let the screen take up as much of the front as possible. And as with other G-series phones, there are no side controls. Instead there’s a bunch of controls by the camera lens on the back.

Like the G Flex‘s rear controls, they’re heavily contoured and so should be easy to use once you’ve surmounted the initial weird feeling of using the buttons. 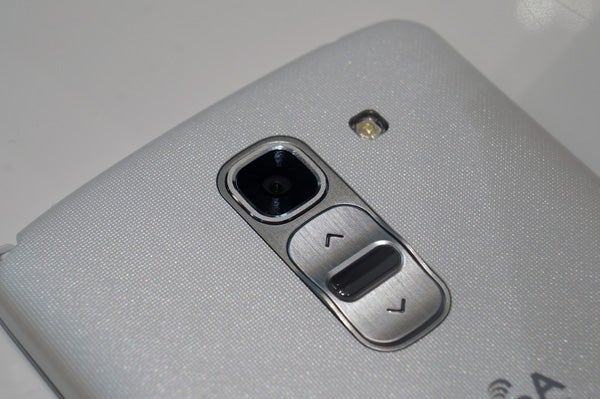 It’s a light phone – 172g is not heavy for a phone of this size – and thickness is a reasonable (but ultimately pretty ordinary these days) 8.3mm. In the demo unit we saw, the phone had an TV antenna, but rest assured this would never make it to the UK market.

As with many recent top-end LG phones, the LG G Pro 2 has an immediately impressive screen. It’s 5.9 inches across and of 1080p resolution. 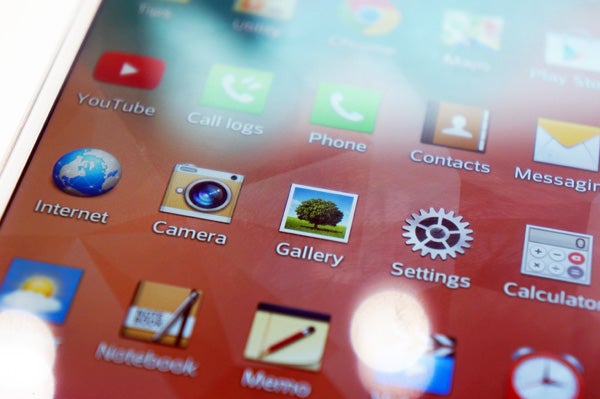 Aside from some nice colourful backgrounds, the LG interface still doesn’t really make the best use of such a screen, though. It doesn’t have as clean and clear a look as vanilla Android 4.4, especially compared with the Google Nexus 5‘s Google Experience interface. You will, of course, be able to run a custom launcher on the LG G Pro 2 to change this.

LG has crammed a few new software features into the interface. Knock Code is an evolution of the KnockOn – a feature that let you turn a phone on from standby with two screen taps. Knock Code lets you program in a sequence of up to eight taps made in a specific pattern. You don’t have to do so in a specific place on the screen and it did work about 80 per cent of the times I tried it. However, it’s still not as convenient as the iPhone 5S‘s Touch ID sensor. 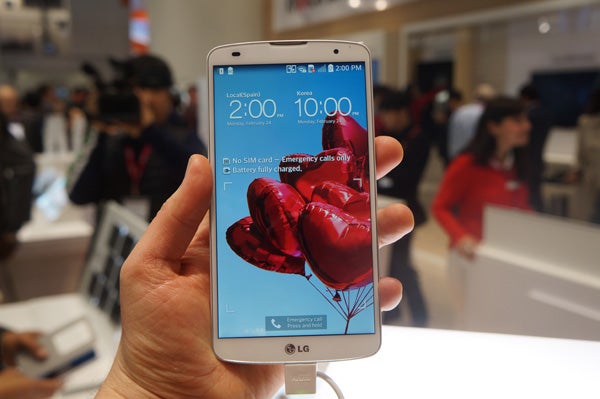 Another key new feature is in the camera – a mode called Magic Focus. What this does is to combine several shots, each with a slightly different point of focus. Although it’s actual a composite of a number of different shots, it appears largely as a normal one in the LG G Pro 2 in the gallery – and you can then alter the point of focus as you like post-shooting with an on-screen slider: 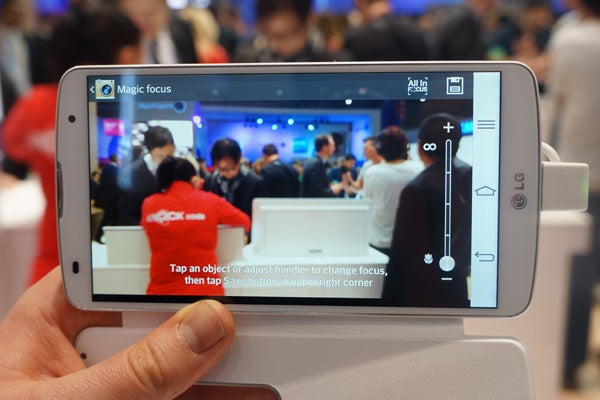 The aim is to be able to impersonate – to an extent – the aperture control offered by dedicated cameras (mobile phone camera apertures are invariably fixed). But it’s actually something a little more basic, simply a software exploitation of the way autofocus works. You also need to keep the phone still for a second or so while the LG G Pro 2 takes the various photos.

The G Pro 2’s actual camera specs are sound. It has a 13-megapixel main sensor with optical image stabilisation. It’s likely to be similar to, or the same as, the camera of the LG G2. Its front camera has a decent 2.1-megapixel sensor. 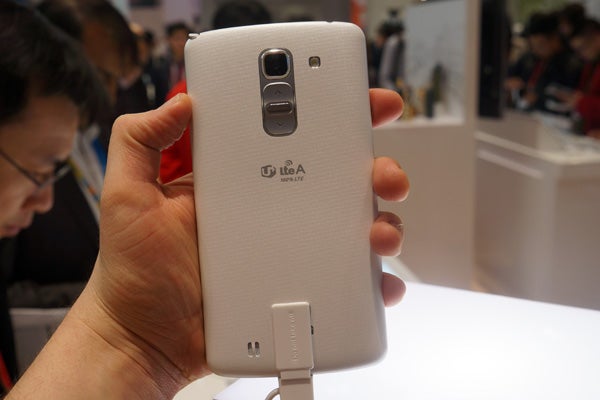 Core specs too are similar to those of the LG G2. The LG G Pro 2 has a Snapdragon 800 processor clocked at 2.26GHz. Some phones are starting to offer Snapdargon 801 chips, but the performance increase is minor. The phone does have a ‘top-end’ 3GB of RAM, but again there aren’t that many obvious reasons why the average phone buyer needs more than 2GB RAM. Even the Samsung Galaxy S5 ‘only’ has 2GB of RAM. Still, it is a nice performance comfort blanket.

16GB and 32GB versions of the LG G Pro 2 are planned, but as the phone has a microSD slot, I reckon we’re more likely to see the 16GB edition in the UK. 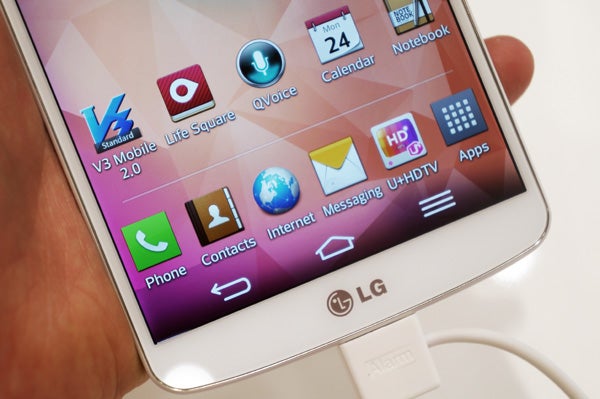 The LG G Pro 2 is basically a bigger LG G2. And many of you may prefer the slightly smaller body of that 6-month-old phone. However, if LG treats this new mobile like the G2 and tries to sell it at an aggressive price, it could be a top pick for those wanting an oversized screen.

Next, check out our best mobile phones round-up