It’s not just the screen and chassis that LG has chopped down, though – internal storage is down to just 8GB from the bigger G Pads’ 16GB, and it has a lower-res rear camera. Thankfully the price has also taken a cut, to just £110, but the G Pad 7.0 faces some stiff competition at the budget end of the tablet market…

Given that the G Pad 7.0’s screen is just an inch bigger than the display on the recently released Nexus 6, it’s hardly surprising that in the hand this tablet feels like a phone that’s been stretched somewhat. The device is intended to be held in portrait mode, which further adds to the unmistakable “phablet” feel. Of course, unless you’re either a clown or MC Hammer, you’d never be able to fit something like this into your trouser pocket – it’s one of the most diminutive tablets you’re likely to encounter, but it’s still a tablet. 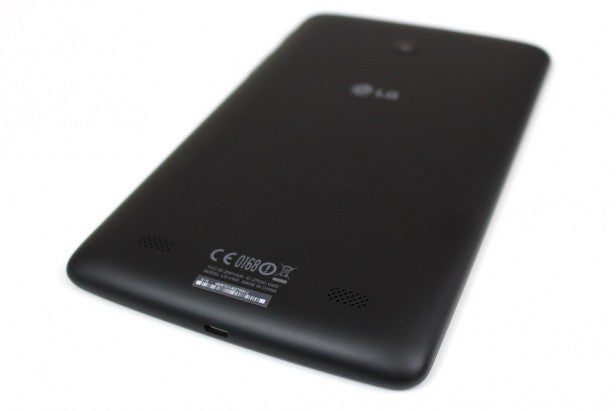 Like the rest of the G Pad range, the 7.0 boasts a clean but largely understated design. The rounded edges make it comfortable to hold, and the matte-finish plastic back increases grip – at the unfortunate expense of showing up greasy fingerprints quite shockingly. It’s agreeable enough, but unlikely to stir any emotions of desire within consumers. If you looked up “workmanlike tablet design” in a visual dictionary, it would show an image of the LG G Pad 7.0. It’s acceptable without being remarkable.

Despite the fact that the G Pad range starts at 7 inches and ends at 10.1, all three devices have the same 800 x 1280 resolution for their IPS displays. As you might expect, this number of pixels looks best on the smaller screen of the G Pad 7.0, where the pixels are crammed into a smaller space and the ppi (pixels per inch) is at its highest.

The IPS tech ensures that colours are faithful and brightness is decent. Viewing angles are also impressive, which is important in a tablet which you could potentially be sharing with multiple viewers simultaneously. 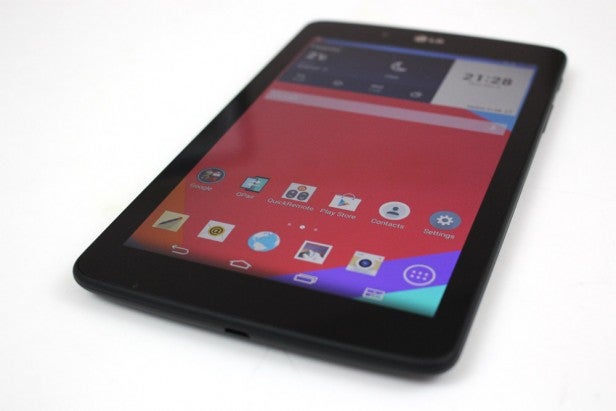 Like its larger siblings, the G Pad 7.0 ships with Android 4.4.2, which sits below a custom skin created by LG. The software is attractive and eye-catching, and offers some visual improvements over the basic Android UI.

There are plenty of useful software features as well, the most obvious of which is LG’s own Knock Code security system, which is given so much prominence that it’s even advertised on the front of the G Pad 7.0’s box. An extension of the “tap to wake” concept seen on other phones and tablets, it enables you to unlock the G Pad 7.0 by tapping out a pattern on the screen, even when it’s in sleep mode. You could argue that it doesn’t save you that much time when compared to more traditional methods of unlocking your tablet, but it’s a neat extra all the same.

Elsewhere, LG’s Q Pair app allows you to create a link between your tablet and your phone so that important notifications are beamed to the G Pad’s screen. Using Q Pair, you can respond to text messages without even taking your phone from your pocket. We can’t stress enough how useful this feature is, and we found ourselves using it extensively during our time with the 7.0. 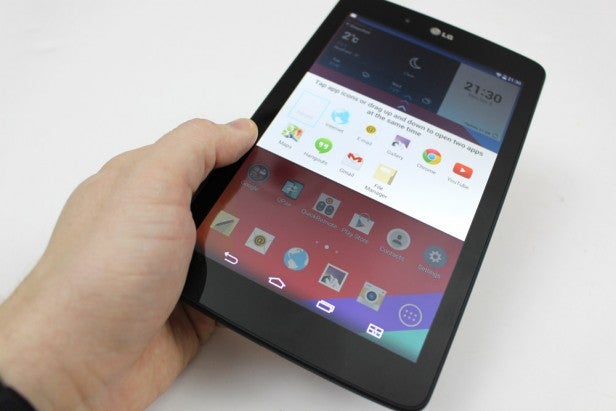 Rather less useful is the G Pad 7.0’s ability to run two applications in tandem, rather like we’ve seen on Samsung’s devices. This feature is present on the G Pad 8.0 and 10.1, and arguably makes more sense on their larger displays. On this 7-inch model, things are just too cramped for you to use two applications side by side, and the impact on overall performance means you’ll probably ignore it. 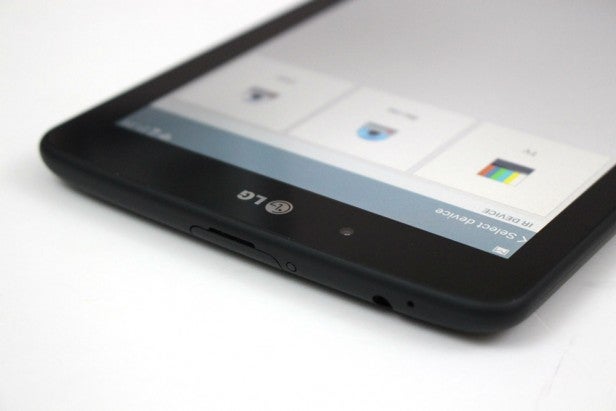 Thankfully the tablet’s ability to mimic your remote control is a little more convincing. The IR blaster on the top edge works alongside LG’s QuickRemote app, allowing you to command your TV, DVD player or Blu-ray player – ideal for those times when the X Factor comes on and you can’t find the remote quickly enough.

LG’s included a few pre-installed apps on the G Pad 7.0, but they’re not all that intrusive. In fact, Polaris Office 5 actually comes in rather handy. Refreshingly, you can uninstall all of the pre-loaded programs if none of them prove useful – something that many other hardware makers don’t permit.