The LG G Pad 10.1 is
powered by a Snapdragon 400 clocked at 1.2GHz, aided by just 1GB of RAM –
around half the amount of memory found in most leading Android tablets
these days. Compared to other slates currently doing the rounds, the G
Pad 10.1 doesn’t possess the raw power to turn heads, but its lack of
grunt is mitigated slightly by the fact that the display has such a low
resolution. With fewer pixels to push, the chipset has less work to do.

Even so, when
you really push the G Pad 10.1, you’ll notice that performance drops
dramatically. Running demanding apps simultaneously slows things down to a
crawl, and moving around the OS is rarely a smooth affair, even when
things are calm. Load up complicated 3D games and you’ll almost feel the
device gasping for air as it tries to achieve a decent frame rate.

The
5-megapixel camera that comes on the G Pad 10.1 is predictably poor,
and lacks an LED flash. It’s barely adequate for taking shots in direct
sunlight, and is next to useless for low-light snaps. The 1.3-megapixel
front-facing camera is fine for the likes of Skype and Google Hangouts,
but this isn’t a device which exactly covers itself in glory when it
comes to photography. Its only unique trick is the ability to take shot
by shouting a special word – such as “cheese” or “whisky” – in what is
amusingly referred to by LG as the “Cheese Shutter”. 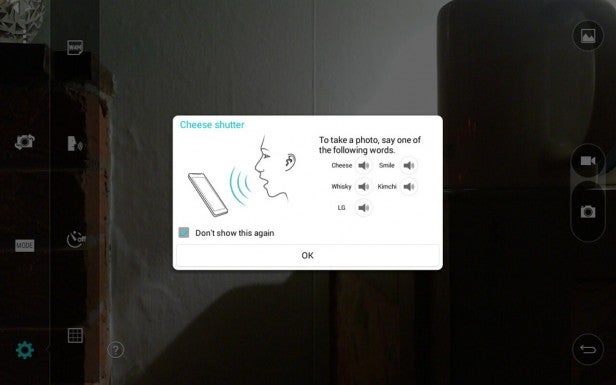 Sometimes,
glaring weaknesses can be turned into vital strengths, and the G Pad
10.1’s low-res screen and weak chipset – combined with a 8000mAh battery
– offer up remarkable stamina. With moderate use you can easily get a
few days out of the device before you have to charge it again, and this
might be of interest to those who are sick of having their tablet
constantly tethered to a wall socket when they get home.

There’s
16GB of storage on offer here, of which the end user has access to
10.08GB. That’s not going to go very far if you want to download movies,
games or music, so you’ll definitely want to invest in a microSD card
to cram into the G Pad 10.1’s waiting expansion slot. The tablet
supports cards of up to 64GB cards, and the plummeting price of flash
media means you should be able to add plenty of storage for very
little cash. 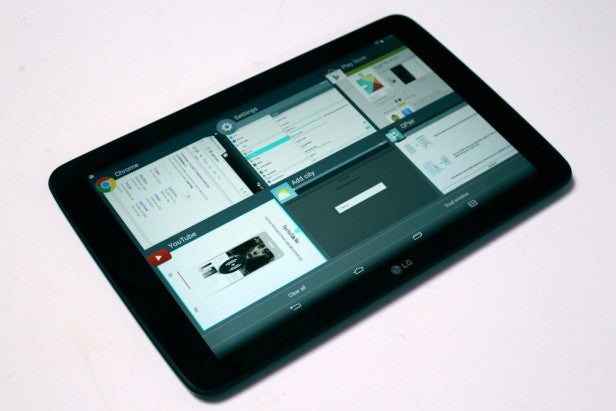 If you’re in the
market for a top-of-the-line Android tablet, the G Pad 10.1 is
almost certainly going to leave you feeling deflated. It has a decidedly
underwhelming processor, a dour design and a low-resolution screen, all
of which make it feel second best to leading Android tabs.

However, the sub-£200 price is very reasonable for a 10-incher, with many 8-inch offerings retailing for more. The dilemma is whether you’re willing to
forego cutting-edge tech and endure average performance just for the
sake of saving a few pennies.

Budget in price and
budget in nature, the G Pad 10.1 is sorely lacking when compared to many
other Android tablets, but the low price makes it worth a look if
you’re after big display for little outlay.