The G Flex 2 runs on Android 5.0.2 Lollipop with LG’s UI overlaid on top. It’s a skinning of the Android operating system that’s beginning to feel as overwhelming as Samsung’s TouchWiz UI, although some of the gesture-related features are useful, even if they initally seem like gimmicks. As well as the best of Lollipop, you get the best bits of the G3 from the new native apps, a smarter keyboard, Knock Code security feature and Google Now-esque Smart Notice.

Lollipop shows its presence in the flatter “Material” design makeover and new-look virtual buttons at the bottom of the screen. You also get the expanded notifications centre and the Recent Apps tab when you’ve got multiple applications running. It’s an Android update that adds some nice visual touches and features, but ultimately LG’s UI dominates the overall experience.

The most notable new gesture-based feature is Glance View. This allows you to swipe down from the top of the screen when the phone is in sleep mode to quickly look at notifications like missed calls, the weather and time. It’s less temperamental than it was when we first saw it in action earlier in the year, but having worked initially on the UK model, we struggled to find out a way to turn the feature back on, despite sifting through the settings. 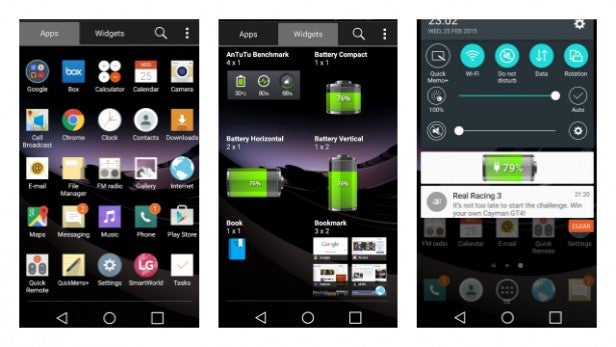 Dual-Window is like Multi-Window on Samsung phones, letting you run two apps at the same time. It doesn’t work with all apps, and you don’t have the same level of flexibility with moving the multiple apps around the screen as you do on something like the Galaxy Note 4, but it’s equally as slick and useful without dropping performance for the more intense multitasking.

When you’re hammering out those emails or texts, the curved screen doesn’t alter the smart keyboard experience. You still have the same screen expanse as you do with the G3, so there’s a decent amount of room for tapping accurately on the virtual keys. LG still uses its adaptive technology, which learns as you type faster and supports the ability to adjust the height of the keyboard to customise individual keys. 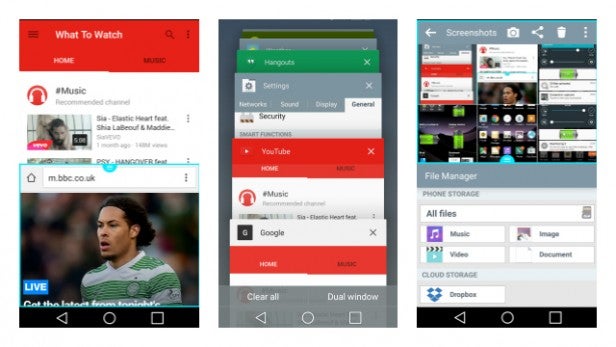 Our G Flex 2 from Korea was literally loaded with apps. There’s an entire page in the app drawer crammed with software from the Korean carrier SK Telecom, which we weren’t about to touch. It’s an entirely different story with the UK handset, where LG has stuck to Google’s suite of apps like Gmail and Drive, alongside its own native applications including the useful QMemo+ and QRemote.

LG’s new Health platform – much like Samsung’s S Health – tracks daily steps, distance and calories burned. You can also add data on weight and blood pressure and can track multiple sports such as running, cycling, hiking or even inline skating with GPS support. It’s a little cleaner than Samsung’s S Health approach and there are some nice touches in the initial setup, providing a recommended daily goal based on target weight and height. It does, however, have a habit of registering exercise types incorrectly, like mistaking running for walking.

The G Flex 2 is powered by Qualcomm’s new Snapdragon 810 processor, stepping up from the Snapdragon 800 inside the G Flex. The 64-bit, octa-core processor is clocked at 2.0GHz, with 2GB of RAM to cover more intensive tasks and the new Adreno 430 GPU to handle gaming. Those eight cores aren’t used all at the same time, but rather reserved for different tasks to help optimise performance. It also means you should see more power to support 4K streaming, better gaming and even audio improvements.

It’s the first of the big smartphones to ship with Qualcomm’s latest high-end SoC that’s been, shall we say, a hot topic of debate recently. That’s down to reported issues of overheating, something Qualcomm’s Vice President of Marketing Tim McDonough told TrustedReviews wasn’t a problem: “The exterior temperature of an 810 device is actually lower than it is for an 800 device – and the 800 was a flagship that everybody shipped.”

Read More: Snapdragon 810 features to get excited about

From the Snapdragon 400 to the 805, Qualcomm’s smartphone chips have been generally a good fit for Android phones. But with our Korean model, even spending a short amount of time without getting close to more intensive tasks such as 4K video or gaming, overheating was clearly a problem. This looks down to the fact that the phone’s slim body struggles to dissipate heat, causing issues even during less intensive tasks. 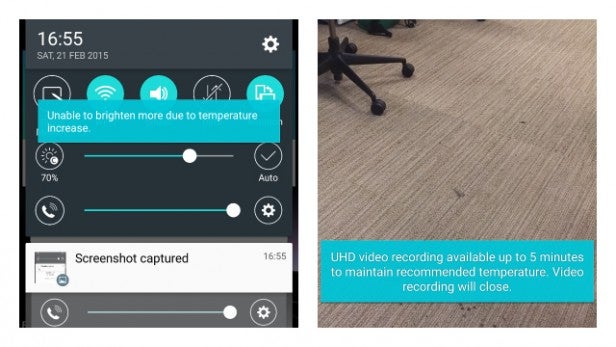 Something as simple as installing a game created a problem when we tried to turn the screen’s brightness up to the max, as can be seen in the left-hand image above. For more intensive tasks like running like Real Racing 3 or Nova 3, it didn’t take more than a few minutes before the top end of the screen and behind began to feel uncomfortably hot. The G Flex 2 had its moments where it just didn’t feel as smooth as we’d expect from a high-end phone. There were moments of lag swiping through the homescreens or launching apps. Even waking up the phone caused the software to stutter slightly.

When we informed LG about the issues, we were sent a second handset, this time the black UK model, and while it didn’t initially appear to generate the same overheating issues, when we tried to download and install Nova 3, we were met with the same notification about not being able to increase brightness due to overheating.

Some early US reviews of the G Flex 2 have suggested thermal throttling is the cause for some variations in performance. What this means is that when the CPU heats up, the clock speed is lowered to be able to cool down. The best way to illustrate this is through the benchmark tests we recorded for both models.

Running the Geekbench 3 benchmark tests on the Korean handset, the G Flex 2 initially scored an impressive 3082 multi-core score. In the following tests, that score dropped down to on average 2228. That’s a huge drop-off of 854 points, which is a good indication that something isn’t right here. We tried the same with the UK version and the drop wasn’t as severe, but was still around 700 points.

It’s hard to identify the problem behind the performance, but the curve could well be part of the issue. It’s highly unlikely that another manufacturer is going to release a curved smartphone this year with an 810 inside it, and the need to keep things curvy and slim while delivering a powerful performance at the same time is clearly something of a challenge.