The M2294D is a 22in LCD monitor that’s as comfortable with TV and movie material as it is with PC and games content. It comes equipped with built-in digital and analogue tuners and all the connections you need to hook up a Blu-ray or DVD player, as well as providing excellent PC connectivity and features. This makes it perfect for bedroom use, where it doesn’t make sense to have separate screens for TV and PC viewing.


But the M2294D wouldn’t look out of place in the kitchen or living room either, as it sports a gorgeous design that puts the majority of PC monitors to shame. The screen is styled with a gloss black curved frame and an alluring electric blue power light, and it sits on an oval-shaped foot that screws into the bottom of the screen quickly and easily. When attached the screen tilts back slightly to create a comfortable viewing angle. 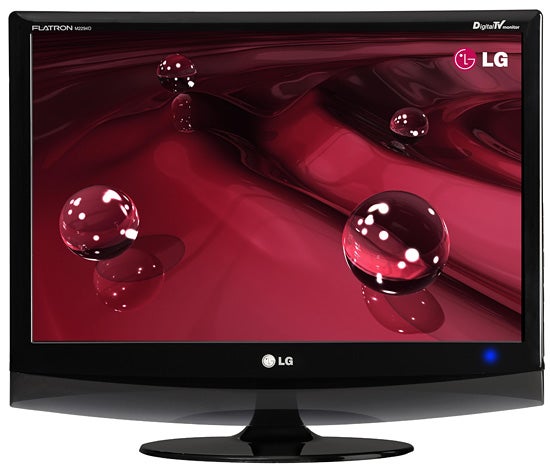 Around the back is a very generous array of sockets. There are two HDMI inputs, which is ideal if you own two hi-def sources, plus two SCART inputs and component video input for analogue sources. On the PC side you’ll find DVI and 15-pin D-Sub inputs, plus RS-232 and USB ports for service and control use. Audio sockets include optical digital audio output, analogue stereo input for the component sockets and a minijack input for the RGB and DVI inputs. Overall, an excellent selection.


The presence of a digital tuner not only gets you the entire spectrum of Freeview channels but also digital text, interactive services and a 7-day EPG. Also on board is a range of self-explanatory picture presets, including Standard, Vivid, Cinema, Sport and Game. It comes set to Vivid so that the picture looks good under intense shop lighting so be sure to set up the picture properly before you start watching. To do so, you can adjust the levels of contrast, brightness, sharpness and colour and tint in the Picture menu, but those who require even greater control over their images can access a separate Advanced Control menu that lets you adjust individual red, green and blue colour contrast and loads of other parameters. Having this level of control over picture quality is a real bonus.


The set is extremely easy to use. It doesn’t launch straight into auto tuning when first turned on but the option is easy to find in the setup menu, and it finds the entire spectrum of digital and analogue channels in less than five minutes. 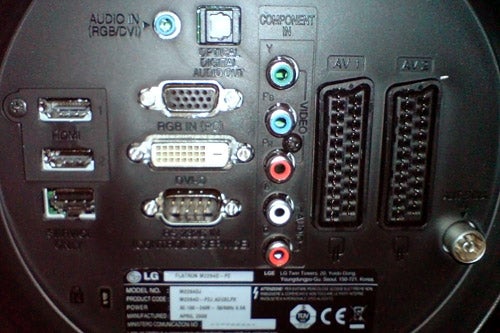 The menu design is displayed in sumptuous hi-def with crisp pictures illustrating each section of the setup menu. All of the options are clearly displayed with sharp, sizeable text and they’re structured in a way that avoids unnecessary submenus. Also impressive is the EPG, which is laid out in a horizontal timeline format with the remote’s coloured keys enabling you to change the date and set the timer. It’s laid over the top of the picture too, so you don’t miss anything while surfing the schedules.


And if you’re looking for a masterclass in how to make a TV remote, check out the M2294D’s zapper. The button layout is admirably simple; the main menu controls are large and perfectly positioned and all the other functions are easy to find. Another nice touch is the input button, which brings up a large onscreen display that shows you pictures of each input.

To test its picture prowess, we started by plugging in a Samsung BD-P1400 Blu-ray deck and watching Warner’s ”TMNT” disc. This all-CGI kid’s movie looks absolutely stunning on the LG’s 22in screen, rendering all of its fine detail with pin-point accuracy. The picture also looks deeper and more cinematic than we expected, thanks to its above average black handling capabilities, and there’s lots of visible detail during darker scenes. The backlight glow prevents black objects from going truly black, but they’re dark enough to prevent pictures from looking washed out.

The screen isn’t quite as impressive with standard definition material but the pictures on offer are still eminently watchable. The ”Blade 2” DVD fed into the HDMI input at 576p, for example, suffers from more noise than the HD feed, but most of the qualities that made Blu-ray pictures look good are in evidence once again.


When hooked up to a PC the screen delivers sharp and readable text with programs like Microsoft Word, and it displays fast-paced games and movies without excessive blur, particularly in the Game mode. 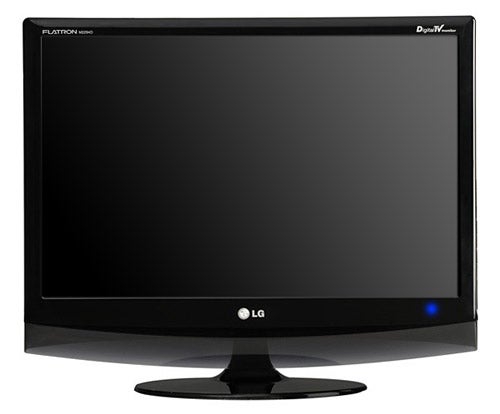 But Freeview pictures show up the screen’s limitations, suffering from more pixel noise than we’d expect and certain backgrounds (such as the brightly coloured walls of the ”Richard & Judy” studio) look a little smeary. Skin tones also seem a touch waxy, but on the plus side the pictures are generally bright and vivid and we don’t think you will have many complaints on a day-to-day basis.


There’s a plethora of sound modes on board including SRS TruSurround XT, which generates a more expansive soundstage than regular stereo. In general the sound quality is very good, expressing speech cleanly and delivering loud action scenes with a surprising amount of clout for such a small screen.


The most impressive thing about LG’s hybrid monitor is how easily it jumps between PC and AV material, providing the sort of visual flexibility to cope with the differing demands of both types of content – but it is better with hi-def than standard def. Other things to list in the pros column include the sterling sound quality and gorgeous looks, making this a great LCD all-rounder.


”Note: 449 Euros has been quoted by LG, but we will bring you final confirmation of the UK price as soon as we receive it, and update the review accordingly.”