If I were to judge the LG Flatron M1910A solely on its appearance, then it would make it onto our list of favourite flat panel displays. The design is certainly one of the more unique in the 19in class and a number of friends have already commented on how good it will look in their homes. Sadly I had to explain it was mine during the testing period and will be returned to LG once the review is completed.


What makes the M1910A really stand out is the two-tone black and white finish, the chrome stand, and the curvaceous chassis. The black bezel, although not the narrowest, is attractively raised from the white chassis giving it an almost “floating” look. Below this the chassis extends downwards into a sweeping curve and it’s here you’ll find one of the M1910A’s strengths – its speakers. 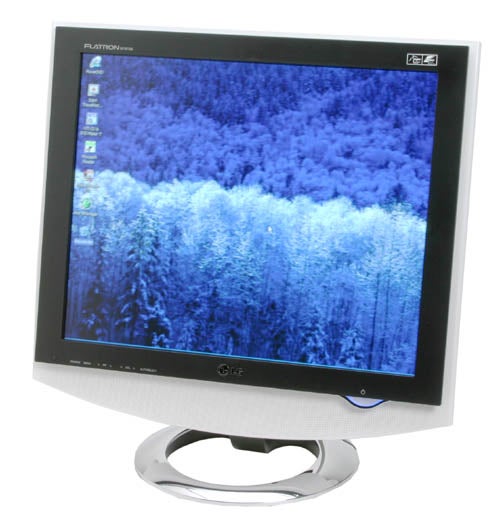 Yup, surprisingly enough this LCD comes with 3W built-in stereo speakers that actually sound rather good. In terms of bass, they won’t replace a set of surround sound units hooked up to your PC, but when compared to the majority of similarly equipped LCDs, the M1910A has enough volume and clarity to make listening to music or films/programmes a genuine prospect.


Did I say watching TV? I sure did, and that’s because a built-in TV-tuner is also present giving the M1910A a dual purpose function – ideal for those with limited space. It means you can use it as a standalone TV, or connect it to your PC for the best of both worlds. 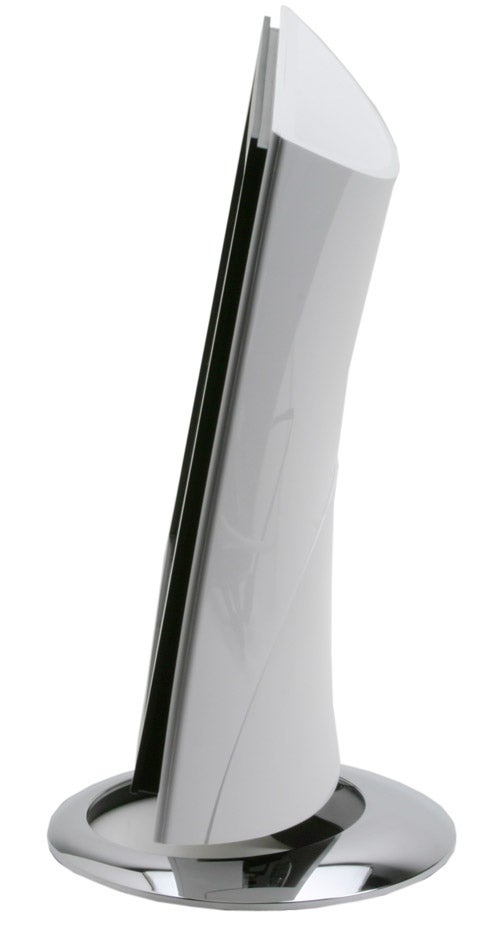 Using the TV-tuner is relatively simple. After you’ve married the appropriate signal feed to the RF input you can auto-scan for available channels, rename them, and then sort them into an ordered list. There’s Teletext support and a handy remote control too that offers full access to all the M1910A’s picture settings. There are some omissions however, and one of those is the lack of a Picture-in-Picture mode – a shame considering that the Samsung 930MP and most TV-tuner PC cards come with this feature. There’s also no FM radio tuner either, another one-up for the Samsung 930MP.

On the other hand, the Samsung was a £400 unit, whereas the M1910A will only set you back £289.99 – fair money for a 19in LCD with a 1,280 x 1,024 native resolution. So why the price difference? Well apart from the omissions already mentioned, savings have been made at the cost of connectivity. First and foremost, there’s no DVI port – just a single D-SUB one. That means you will (as I have) be pressing that Auto button on the monitor’s fascia every so often to bring the analogue signal back into line. In fact, it was quite common for the pixel tracking and timing lock to drift over time, resulting in blurry text and a noisier picture. This doesn’t occur when a DVI port is used, so you can understand my disappointment over the lack of one. 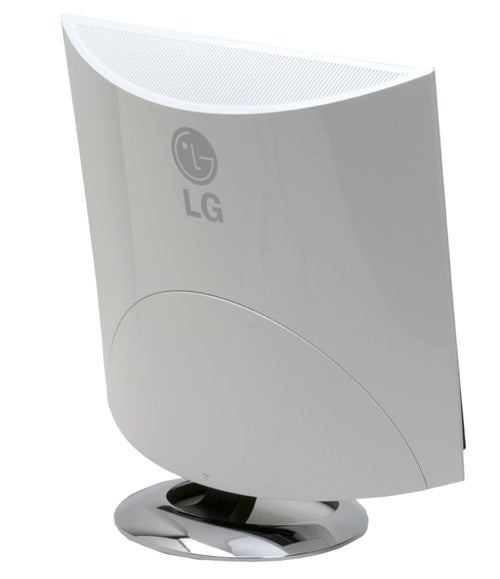 Secondly there are no component ports, not that I’d advocate using this as your main TV-set and hooking it up to a high-end DVD player. Furthermore, there’s no RGB SCART socket. What you do get around the back are composite video, S-Video and stereo RCA ports, enough for a simple set-up with a DVD or VCR – fine for most users. The composite video is also useful for viewing pictures/movies directly from a compatible digital camera or camcorder. 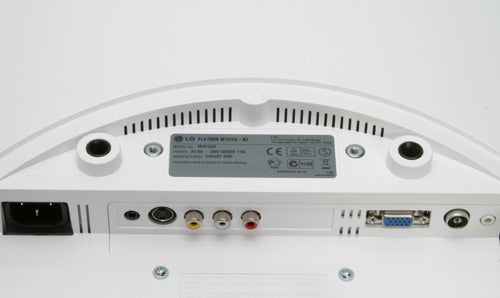 The ports are joined by the ubiquitous audio-in jack and a headphone jack, although the latter would be better placed on the front of the chassis for easy access. Cables are a bit thin on the ground consisting of an RCA to SCART cable, a mini-jack audio cable, and a D-SUB cable. The power supply is integrated to keep things tidy, and the trailing leads can be gathered up into two clips mounted either side of the stand’s neck. Speaking of the stand, the example on the M1910A is a little disappointing. This is a tilt-only display and as I write this review I can’t help but feel it sits a little too low on my desk. Those looking for a height-adjustable and/or pivoting monitor will have to look elsewhere.

The M1910A’s controls consist of seven buttons positioned to the bottom left on the underside of the protruding bezel. The layout is pretty standard, comprising of buttons for “Source” selection, “Menu” entry, up and down controls for adjustment and programme scrolling, increase and decrease for volume and picture tuning, and “Auto/Select”. The power switch on the right is touch-sensitive and glows with a blue light when on and an amber light in standby. A fancy touch, but the light is a little distracting in a darkened room. 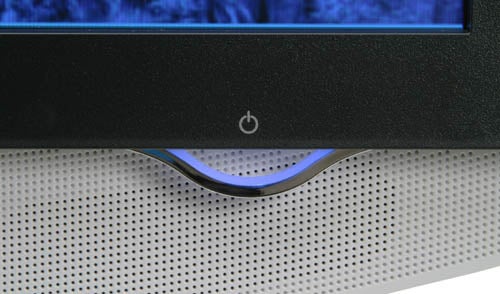 Menu navigation is relatively easy-going, but some of the acronyms within the menus aren’t obvious at first glance. The choice however is good. For the sound, you can change the balance, select auto volume levelling and, under the “SSM” function, change the acoustic environment depending on what you’re listening to. The options are “Flat”, “Music”, “Movie”, “Speech”, and a “User” mode that represents a simple graphic equaliser. 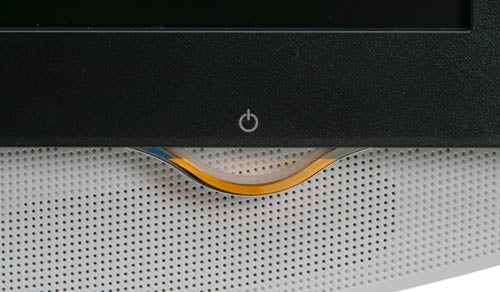 As for picture adjustments, you have the usual contrast and brightness scales as well as colour temperature presets named “Cool” for a bluish tone, “Warm” for a reddish one, and “User” for individually adjusting the red, green and blue levels. Within the “PSM” function you also get options called “Dynamic”, “Standard”, “Mild”, and “Game”. To be honest these didn’t really make a big impact with me. In fact, it looks as if the contrast and vibrancy drop as you move from “Dynamic” to “Game” – a little strange considering that many gamers want to boost the vivacity of the picture. When selecting the TV-tuner or one of the video sources you can also make changes to the overall colour of the picture along with its sharpness and tint.

You also have LG’s well known f-Engine chip; (you can read more about it here. However, this version appears to be more streamlined and has lost some of the user features found in earlier f-Engine monitors. For instance, the split screen for previewing the f-Engine chip’s influence has gone. Here the f-Engine can only be turned on or off. Its affect is to increase the contrast and brightness without affecting the colour tonality of the picture. I found it helped bring out a little more detail in dark movies and games. 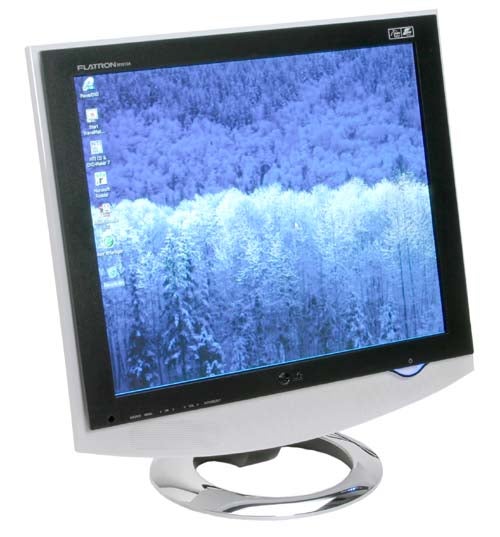 I used all of these settings quite heavily when testing the M1910A. First, I should say that the TV-tuner had no problem finding the signal from my cable provider and from an indoor aerial. However, the picture was always a little too saturated including the one from a mid-range DVD-player. Skin tones looked false and while I could change the tint and makes changes to the colour levels there was a distinct artificial look that I couldn’t get rid of. You could still make out subtle greens and pinks on close–ups of people faces.


Although debatable, this can be a result of the M1910A’s 6-bit panel which needs to use fancy dithering algorithms to push the colour gamut up to 16.2 million colours. Don’t get me wrong though. The picture is not unwatchable, but I’ve seen better. The M1910A also suffered from a somewhat grainy picture, similar to the one I observed in the LG Flatron L1730P. As for the DisplayMate tests, the M1910A put in an average showing. There were some signs of banding in the 256 greyscales, and the 10-colour scales faded to black unevenly. 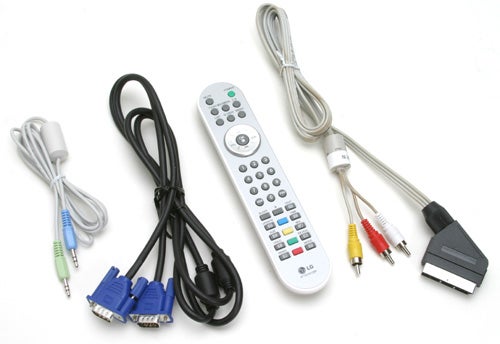 Overall, this is a difficult display to recommend. Its fine for general use, either as a standard PC monitor or an everyday TV, but it doesn’t excel in either area. If you start to push it with some hardcore image-editing or highly-quality video then it falls short of the mark.


The 19in LG Flatron M1910A looks good on your desk, has a decent set of speakers, and comes with a competitive price for an LCD TV of this size. Sadly, this is overshadowed by a mediocre picture quality and the absence of a DVI port.