LG’s 20in Flatron L206WU is ironically named, since not only is the actual panel casing thicker than most monitors of this size, but it also has a large round base and stand that makes it one of the deeper monitors on the market. Apart from that we have a 16:10 aspect ratio, along with an ordinary 1,680 x 1,050 resolution, unremarkable brightness of 300 cd/m2, and usual suspects for connection; DVI and VGA. At first sight, the only noteworthy specification is a frankly implausible 5000:1 contrast ratio. So why the excellent score? 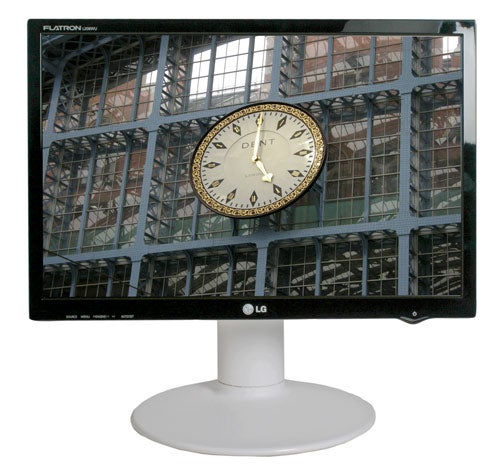 Partially, it’s down to the fact that I left out one display connection. No, not DisplayPort, this monitor has USB. So what? Another integrated USB hub, I hear you say. But all is not as it appears, because what LG offers with this screen is something quite special: DisplayLink technology. It offers all the goodness of a multi-monitor setup without any of the hassle. Also, if your notebook or PC doesn’t have a DVI or HDMI port, DisplayLink allows you to still connect via a crisp and clear digital signal.


So, if your laptop only has VGA-out, but you want to display a digital image on your monitor, just plug the L206WU into a USB port. It won’t even cost you a port, since this LG can also act as a hub. But rather than waste space trying to tell you how amazing it is, I’ll just point you in the direction of the only previous example of this technology we’ve had in the office: the Samsung SyncMaster 940UX, which by nature of its 4:3 ratio was more business than entertainment oriented. The LG Flatron L206WU, on the other hand, is a proper widescreen affair, and its looks imply that it’s geared towards consumers rather than business users. 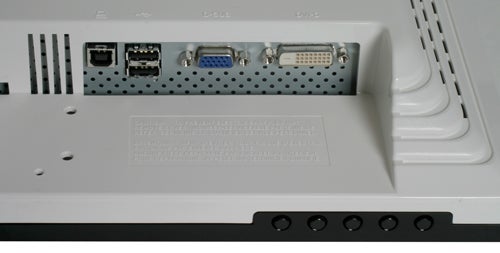 But before I get too caught up in the DisplayLink craze, let’s take a breath and go back to beginnings – or, in this case, unwrappings. The Flatron L206WU comes with every cable you could possibly need to connect it, comprising DVI, VGA and USB, while attaching the heavy, large arm to the thin but robust base is a simple matter of clicking it in. The included CD contains a clear User’s Guide in any language you can imagine, and drivers for any version of Windows from 95 to Vista.


In terms of looks, LG has gone with a rather unusual combination and we’re not sure whether we like it. Opinions in the office range between hatred and cautious admiration, but obviously it’s a personal thing. This is because the Flatron L206WU rests a sensual, smooth, slim, sleek, shiny, streamlined and – dare I say it – sexy black bezel, the likes of which wouldn’t look out of place on a KURO TV, on what is possibly the whitest base I have come across, constructed using matte plastic. 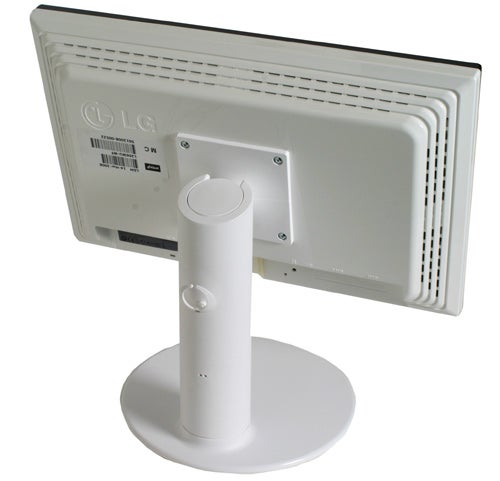 Consequently, the actual monitor itself sports two disparate finishes: mirror-glossy million-dollar black versus matte run-of-the-mill white. Although this applies only when viewed from the front; the back of the monitor is also white, but in the same shiny finish as the bezel. Whether you think this is the ultimate in style or just kind of ugly is up to you; personally I’m somewhere in between. If you are placing the monitor in a white environment it can look very classy, and, in a thoughtful touch, LG includes a large cleaning cloth to maintain your bezel’s darkling gleam.

As to ergonomics, the chunky stand more than pays off by offering some of the smoothest ergonomics and probably the highest vertical adjustment in its class. In fact, adjustments are so smooth that you can raise, lower, and even pivot the screen with one finger!


This is partially thanks to the excellent damping system employed in the stand, and of course the Flatron L206WU also offers a nice amount of tilt. The power LED is a subtle, muted blue, while the totally non-reflective screen is an absolute joy to use in environments with excessive ambient light. A slightly crude-looking (though adequately hidden) cable tidying system actually works really well, tucking all the cables neatly out of the way, so that the clean lines of your snazzy – or garish, depending on your taste – monitor aren’t spoiled by trailing wires. 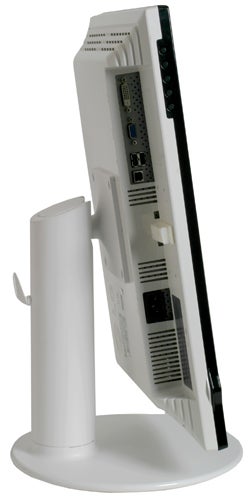 When playing with the settings, I found the OSD to be tidy and fairly intuitive. Even in USB mode the L206WU offers adjustments for brightness, contrast,gamma and RGB, as well as colour temperature and sharpness, which is more than some monitors offer on their dedicated graphical inputs.


Installing the embedded DisplayLink software, or ‘USB Easy Connection’ as LG calls it, takes about a minute and requires minimal user input (although a restart is required), after which a small system tray icon gives complete, and above all, simple control over your secondary monitor. Despite the manual’s claims to the contrary, DisplayLink can work with Windows Vista, although we did experience some glitches: out of five Vista machines tested, on one the L206WU only worked most of the time, while on another it stopped working completely after the second boot-up.

In other words, if you have a laptop running Vista, a try-before-you-buy policy might be in order. Also, the manual is unfortunately correct in stating that Linux is still a no-no, which is a shame considering this display could well be an ideal companion for an Eee PC – like the new Eee PC 900 If nothing else, plugging a screen into a USB port is just so much easier than fiddling with a thick and heavy VGA cable.


But of course, all of these features are somewhat moot if the image quality isn’t up to scratch. It comes as something of a relief then that LG’s effort in this area is actually quite remarkable given the price. For starters, quality is fairly consistent across inputs, with no distinguishable difference between USB and DVI, while VGA even looks good after you’ve pressed the auto-adjust button.


Viewing angles are as good as one can expect from a TN panel, with the usual falling of off colours evident from around 160 degrees. The backlight bleed is also surprisingly minimal for a screen in this price point, with only a slight brightening along the lower bezel. Apart from this, lighting and colour-reproduction are even across the entire screen.

As with most of LG’s LCD offerings, the L206WU comes with its f-ENGINE image processing technology. This is meant to improve contrast, colour vibrancy and black levels, using a combination of signal processing and a dynamic backlight. With the f-ENGINE turned off, greyscales are competent, and I found the Flatron L206WU can produce subtle colour-gradations. Not a monitor you’d want to use for professional photo-editing (you still need a good MVA or preferably IPS panel for this) but perfectly adequate for the average user. As you might expect from a 2ms monitor, games suffer very little smearing or ghosting.


However, without f-ENGINE processing, even normal office use seems to offer a slightly drab experience, lacking some of the punch that has been a staple of TFT monitors. It’s not bad per see, merely unremarkable. Meanwhile, watching a movie on the Flatron L206WU in normal mode is a kick in the grey stomach of its claimed 5000:1 contrast ratio. 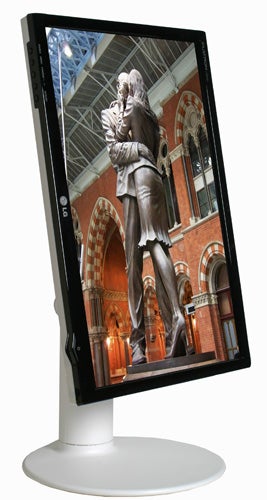 So why the 8 out of 10 rating for image quality? Simply press the little f-ENGINE button under the bezel, and prepare to be amazed! Andy reviewed a monitor with this technology before, the LG Flatron L227WT-PF, and wasn’t too impressed due to the combination of high colour gamut and colour boosting processing creating an overly vibrant, unbalanced image. However, with this iteration, LG seems to have got it pretty much right.


No matter what you’re doing, whether work or play, it adds vim, verve, vitality and vigour. While it’s not even close to 5000:1, the dynamic backlighting and image processing the f-ENGINE kicks off do lend movies and games a surprising amount of depth. Handily, the Flatron L206WU shows you a split-screen view (one side with f-ENGINE enabled, the other without) while adjusting, so you can see exactly how much damage you’re doing. 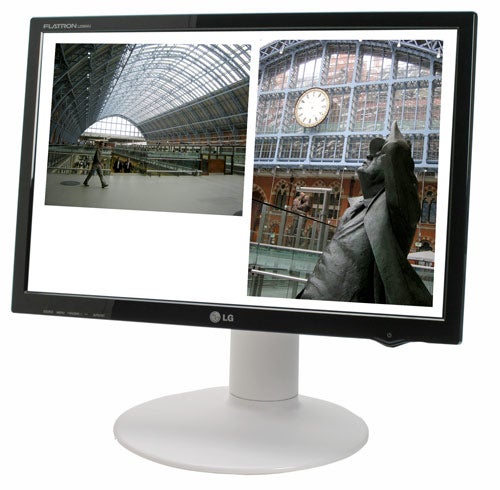 Except in this case you’re more likely to do good. Though it slightly emphasises any noise already present, makes gradations just a tad less smooth and still adds a subtle red tinge to skin tones and artificiality to bright colours, we think the sacrifices are more than worth it. You can switch between ‘normal’, ‘user’, ‘text’, and ‘movie’ modes, and while the movie setting tends to be a bit overenthusiastic in its processing, ‘text’ offers a good balance (even for movies). Or you could just adjust it to your personal liking by employing the ‘user’ mode.


Right now, though admittedly by mere dint of being the only sports car on the block, the Flatron L206WU is the Ferrari of DisplayLink-enabled monitors. Even as a ‘normal’ monitor this LG would be acceptable value, but until more competition comes along using DisplayLink, it is an absolute steal!


Offering above-average image quality, impressive adjustability and an enjoyable movie and gaming experience, this screen has a lot going for it. And when you throw in the DisplayLink functionality, it’s clear why this LG walks away with a Recommended award.