It has been a while since I’ve taken a close look at an LG TFT monitor, so it’s good to see that the company continues to produce elegantly designed units such as the L1730P. This 17incher offers both height adjustability and a pivoting screen all of which are finished in an attractive silver and dark grey livery. So if looks and functionality are high on your display requirements this LG makes an excellent first impression.


However, after fitting the base to the neck of the stand the build quality didn’t seem to be of the highest order and it certainly wasn’t up to the standard of Samsung’s SyncMaster 173P. The base itself is encased in a plastic that seems rather flexible and the same stuff has been used to adorn the neck. Despite this overall plastic feel, the neck’s integrated sliding mechanism is spring assisted, which makes adjustment through its seven centimetre range a reasonably smooth action.


I also can’t forget that for around £280 at the time of writing, this display also lets me write reviews in a portrait orientation – something that I really like to do especially on a 17in LCD with a 1,280 x 1,024 native resolution. The reason? Well, I can fit a whole page of A4 in a single window at 100% zoom. Of course, to benefit from this feature the picture must also be rotated, which can be done either by using the bundled Pivot Pro software or in most cases within your graphics card’s display settings.


Needless to say, I am currently writing this review in portrait mode, and there’s one issue concerning the display’s performance that I can spot straight away – a narrow horizontal viewing angle (or to be more accurate a narrow vertical viewing in the standard landscape position). When I move my line of sight to the left by just a few centimetres off centre the illumination along the right side of the picture falls rapidly. That said, top and bottom viewing angles (left and right in landscape mode) are much wider.


More positively, the L1730P also comes with a USB hub with one upstream and two downstream ports, plus the necessary cable to hook it up to your PC. The hub can be detached (rather too easily in my opinion) and it conforms to the USB1.1 standard, which isn’t too much of an issue considering it’s intended for input devices like mice and keyboards.


As for the rest of the connectivity options, LG has squeezed in both a D-SUB and a DVI-D port for the price, along with both cable types. And, with a dedicated signal source button nestled within the rest of the vertically mounted OSD controls, one can easily switch between these signals. The L1730P does lack speakers, but to be honest that’s no great loss as the majority of those fitted to LCDs are embarrassingly weak.

Moving on to the OSD (seen above), this is well designed and laid out. As mentioned before, vertically mounted buttons control access to the menus in a reasonably intuitive way. I say reasonably, because it is easy to press the source button by accident when moving through the various options. When this happens the L1730P hunts for another signal, thereby leaving you staring at a blank screen for a few seconds until it reverts to the original source. As for the choice of controls, these are standard and include the usual adjustments for screen position, independent RGB channels, colour temperature and for clock and phase. There’s also a triple-stepped gamma control for really boosting the detail in those dark and moody games.

Now, one of the key marketing points that LG focused upon during the launch of this monitor was the Flatron f-Engine chip embedded within the display. This chip, developed by the company, is designed to enhance the picture depending on the intended use of the monitor. All this sounds rather fancy but at the heart of it lies what the company terms as DAFI or Digital Adaptive Fine Image technology. Apparently, this does not affect colour, but enhances brightness and contrast.


The effects of the DAFI technology can be found under the “User” sub-menu of the OSD when the f-Engine button is pressed. It includes what is termed as a RCM (Real Colour Management) function to bring out vivid natural colours along with an ACE (Adaptive Clarity Enhancer) function to enhance brightness and contrast in moving images such as DVD viewing and gaming. In effect, this is somewhat similar to the enhanced brightness modes you sometimes find in other TFT monitors. There are also two more preset modes – one for “movie” and another for “text”.


To break down the settings further I evaluated how they affected both images and a DVD movie. First up was the ACE. There are three levels present: 0, 1 and 2. Level 0 is the default, whereas level 1 seemed to increase the brightness of our test image, while maintaining the contrast. Level 2 seemed to really boost the contrast so that detail like the freckles on the subjects face really stood out. For games, the level 2 setting also made the picture more vivid.


As for the RCM mode, there are four levels in total: 0, 1, 2, and 3. The effect of these is muted in comparison with the ACE. In fact, each seems to invoke very subtle changes to colours in the image, with level 2 having the most pronounced influence over colour saturation. For your information, LG has designated level 1 as influencing the green level, level 2 for flesh tones, and level 3 for colour enhancing. In practice, levels 1 and 3 had little affect when RCM was to set to its default.


One of the cool features of the f-Engine is the fact that you can view the changes you make over a split screen. The left half of the screen shows what the picture will look like when the adjustments have been applied, whereas the right side retains the original settings. 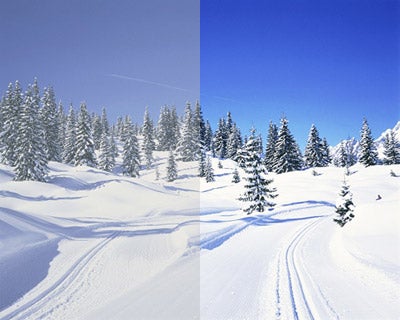 While I had no problems getting images to be displayed accurately, the overall quality of our test DVD movie was marred by a very grainy image. Despite changing all the settings as well as selecting the movie mode, I could not make any improvements. Now even though LG states that the L1730P is a 12ms monitor and motion smearing was on the whole difficult to detect, watching the movie was not a good experience. The grainy noise was simply too overpowering. To check, I played back the same sequence on another monitor and that was far better.


This is a real shame, as the results gleaned from DisplayMate’s test screens were good when using either an analogue or digital signal. Colours were very vibrant and scales, both greyscale and colour, were smoothly stepped. I did need to tweak the colour balance in order to remove a green hue that was evident in some light greys but generally, there was little to complain about.


On the face of it, the L1730P looks smart and offers a good range of features such as dual connectivity, a USB hub, a height adjustable stand and a pivoting screen. It can also handle images commendably after some tweaking, but if you are looking for an all-round performer with wide vertical viewing angles that can also double up as a movie screen, you will be disappointed.