The LG F14A8FDA is a mid-range 9kg capacity machine with plenty of features, including LG’s 6 Motion Direct Drive technology. Unique to LG this means that in addition to a standard round-and-round rotation, the wash motion differs with the programmes selected. There is a standard tumble, an intensive scrub where a figure of 8 shape is created by the washing and a silent wash where the laundry is gently rolled below the water level. On top of this you have an innovative heart shaped swing motion for delicates, a spin and spray motions for speedier soaking and a go-half-way-then-stop motion after spinning to help prevent wrinkles.

This machine also comes equipped with LG’s Smart Diagnosis, a function that is useful if the machine has a problem. Just call up the LG customer services and, when instructed, hold the phone next to the Smart Diagnosis symbol on the fascia. This will let LG know what the problem is and whether it needs an engineer or it can be easily fixed as it may just be something simple, for example rubbish in the filter, which can be resolved immediately by the customer.

LG is so confident about its ‘beltless’ Direct Drive system that is offers a 10-year warranty on the motor. 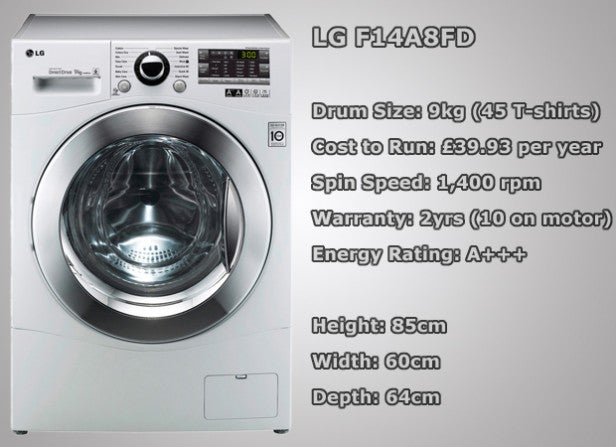 Operating the LG F14A8FDA is simple, starting with the wide door opening. The LED display clearly shows the chosen programme and allows you to modify it to suit by adjusting the temperature, spin speed or any other additional features that you may require. A single beep is sounded on each touch control button press, which informs you that your selection has registered.

The wash time is then calculated and shown as a countdown time as well as displaying small funky back lit washing icons to indicate at what stage the cycle has reached. On ending the cycle the machine plays a little ditty, which we found somewhat annoying but may appeal to those who still think musical door chimes are cool.

LG F14A8FDA: What programmes does it have?

Within the 14
programmes on offer there is plenty of choice for the busy household.
Apart from the usual cotton, easy care and woollen washes, there is also
a cotton eco for the energy conscious, a baby care and skin care
programme to provide better rinse performance, and quick 30- or
intensive 60-minute programme for speedy washing. A silent wash provides
less noise by rolling the washing beneath the water level and is ideal
for using overnight, especially with the cheaper electricity. This
programme did register nearer to LG’s claimed 53dB washing noise.

A
handy favourite function is the ability to tailor individual wash
features and save them as a custom programme until the next time. Just
select the Favourite programme, choose wash method, spin speed,
temperature etc, then touch and hold the Favourite button for 3 seconds
and the programme is stored for later use with a single button press.

With its inverter brushless motor this machine really does measure incredibly quiet on a full 1400 spin. With a nicely balanced load rarely did it peak over 70dB (C-weighted) according to our measurements, which are considerably quieter than LG’s published 75dB.

This cracking result was a little tempered by the wash noise, which hit 69dB peak with the washing sloshing about, as opposed to the 53dB that LG claims. To add a bit of perspective, 70dB is no louder than most people have their kitchen radios so it is still very quiet by the standards of older machines and an impressive result all round.

We ran three different wash cycles for our tests; a 40 degree cotton wash with a 7.2kg (80% extra) full load at 1400 spin speed, a 40-degree cotton wash with a 3.6kg (40% extra) load at 1400 spin speed and then the same wash, but this time in eco cotton mode. We did not use the full 9kg load as using 80% is regarded as more realistic for day-to-day usage. We also included a test stain strip in the first wash that was stained with dried on ketchup, coffee, blood, red wine and engine oil and ran the test using a non-biological detergent.

The timings indicated on the display for all the washes were fairly accurate. The first wash ran over by 12 minutes from the 3 hours 8 minutes indicated at the start of the wash and was also very effective spinning the majority of water out. There was 2.3kg (32% extra) of water weight left behind from a 7.2kg dry starting weight, though it has to be said three hours is on the long side for a cotton wash.

All of the stains on our strip were removed, apart from the engine oil, which only managed to get a bit lighter in colour, but engine oil does need some help from biological powder to fully remove. Using an average energy price of 15p per KWh at the time of this review, this cycle worked out costing a mere 18p per wash.

Water weight left behind on a 3.6kg start weight was also fairly similar – Normal 1.3kg (36% extra) and Eco 1.5 (42% extra) – which is an average result for this type of machine. However there was not such a huge difference in the cost of a wash with the normal wash being 14p compared to the 12p Eco-wash. Generally this LG is quicker than many of its peers but there is less difference in the running costs between normal and eco modes.

Another great feature of LG’s 6 Motion Direct Drive system is that after the final spin the machine will gently rotate and then stop the drum so that your washing loosens from the sides of the drum. As many high speed machines leave your washing plastered to the drum after final spin, this is a nice touch. Moreover, we found this feature helped washing emerge in a gentler, softer and less wrinkled way. 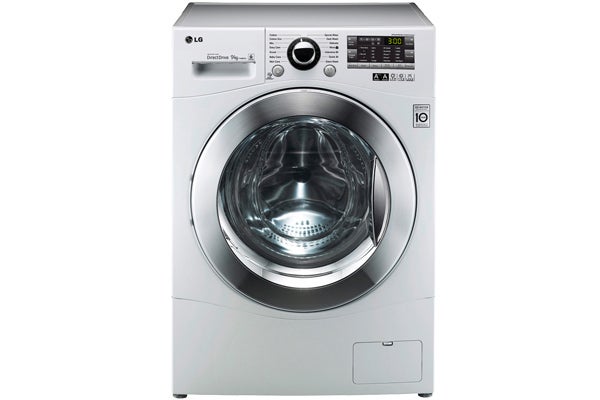 Yes. If you are looking for a reasonably sized machine with a good choice of programmes and a very effective spin, the LG F14A8FDA is a great bet — provided you can put up with the corny door chime for which we found no way to turn off. The different drum rotations are a unique feature and you can actually observe them in progress, with the wrinkle care motion after spinning very effective.

Its these additions and the LG’s superior spin effectiveness that help it edge the slightly cheaper Panasonic NA-148VG4, though the latter is worth considering given its £100 cheaper.