Just a couple of years ago, smartphones were the preserve of the high-end-contract-using classes. Not only did the phones cost a bundle on a pre-pay deal, data did too. The cost has tumbled on both sides now, but the feature phone isn’t dead yet. Enter the LG Ego WiFi, which runs LG’s proprietary phone platform rather than an advanced OS like Android. It’s stuck in a tricky middle ground though, with a smartphone-like price, but no smartphone-like flexibility.

The LG Ego isn’t a real smartphone because it runs a relatively “dumb” operating system. But, to look at the specs list, it seems to offer everything a budget smartie pants phone would. It has 3G HSPA mobile internet. It has Wi-Fi. It can retrieve your emails and your friends’ tweets and Facebook updates. It even looks like a budget smartphone.

With a 2.8in touchscreen and a fairly petite – if chunky – plastic body, the LG Ego invites comparisons to phones like the Samsung Galaxy Europa and Vodafone 845. It has a two-tone design – the screen surround is glossy black, while the full-back battery cover and soft keys are white. Bisecting the side of the phone diagonally, the black/white border between back and front is the phone’s one conspicuously style-oriented move.

It’s not a particularly stylish or classy phone though. The too-large icons on the soft keys, unsubtle camera lens and speaker grille on the back make sure of this. It’s rather like Samsung’s classic non-smart touchscreen hit of 2009, the Genio Touch, without the cheerful colour backplates.

On the LG Ego’s right edge is the microUSB slot, covered by a plastic flap. The only other on-body connector is the 3.5mm headphone jack on the top. There’s also a microSD slot under the battery cover to supplement the measly 50MB of internal memory available to you.

Button-wise, it’s bare basics here too. The power buttons sits on the top edge, volume controls on the left edge. Aside from these and the three front soft keys, everything else is operated using the 2.8in touchscreen.

The LG Ego’s operating system is a little like Google’s Android. You have three home screens that you can populate with widgets and shortcuts, as well as a full icon-based menu that’s home to all of the phone’s functions. 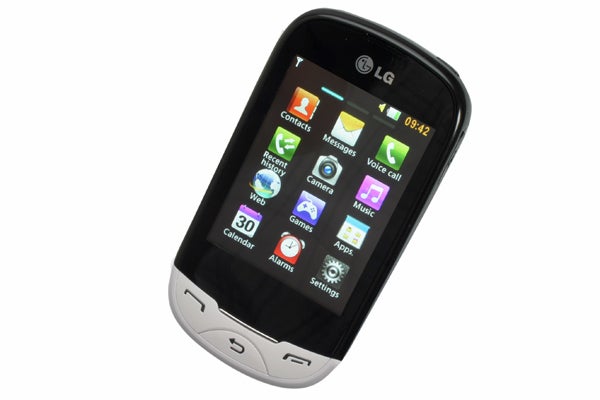 Each home screen is effectively split into the static shortcut dock at the bottom and a grid of nine slots, with most widgets taking up one or two slots. The majority of these widgets are teensy, and although several are quite cute, they’re designed more for function than form. Even with some fiddling, you won’t get your home screens looking like works of art.

The low-res 240×320 pixel display doesn’t help here either. There aren’t enough pixels to make text look super-sharp at the best of times, and trying to cram a clock into an 80×80 pixel space isn’t going to improve matters. 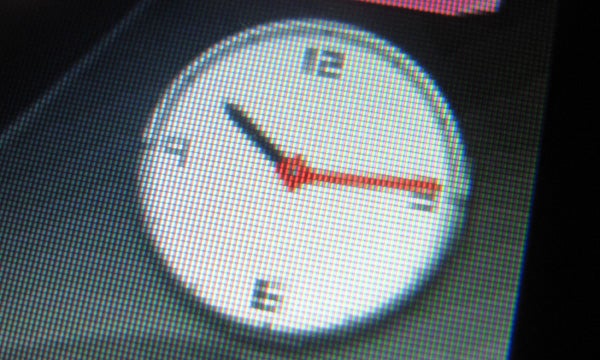 Every pixel is precious in the LG Ego

Beautiful they may not be, but these home screens are efficient. With nine slots to work with, you can add tons of functionality to each one. Here’s a quick run-down of the included widgets –

This is a better spread than you’ll find pre-installed in most Android phones, but it needs to be because there’s no app store to top-up your library with. LG does offer its own online Mobile Widget Gallery, but at the time of writing it was jam-packed with a whopping three additions.

Apps suffer from the same problem, but a few key picks are included as standard. There are nippy Facebook and Twitter clients installed, plus an email app that’ll pick up your Gmail messages with no problems. The phone continually crashed when we tried to sync our Hotmail account though. If you want to indulge in the gaming and app-related fun you’ve seen your smartphone-wielding friends enjoy, you won’t find much of it here. 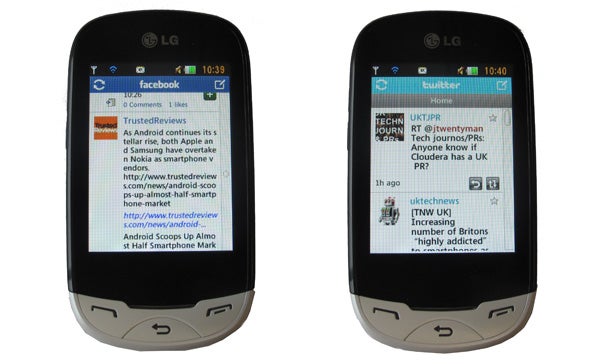 A more significant compromise than the wealth of apps, though, is the touchscreen. It uses a resistive panel, which senses direct pressure rather than conduction, unlike the capacitive screens seen in most of today’s new touchscreen phones. Your finger has push down the top screen layer onto the one below it, so very light touches won’t register in the LG Ego. The result is that it doesn’t feel very responsive.

It’s not a problem when making larger gestures, such as sweeping through home screens, but frustrates with anything demanding greater accuracy. Some icons within the interface are tiddly, and tapping them in the correct manner can take several attempts. Working in tandem with the small size, the unresponsive touch tech makes using the Ego an occasionally trying experience. 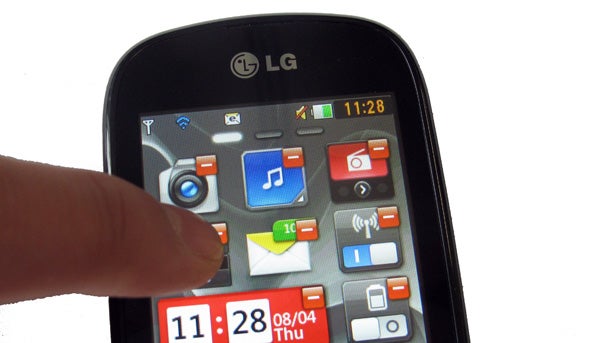 This gruesome twosome also affects typing. When composing texts and emails, you can only use the full Qwerty keyboard in landscape orientation. Held the normal way, you either have to use keypad-style input or rely on OCR – drawing each letter on the screen, in other words. Woes surrounding touchscreen accuracy and responsiveness mostly melt away if you use a stylus, but one isn’t included here and the phone’s not really intended for use with one. There’s only one main reason why a resistive screen’s used instead of a capacitive model here – it’s cheaper.

The resistive touchscreen also rules-out using the neat pinch-to-zoom gesture when browsing. It’s because current resistive touchscreens cannot sense more than one point of contact. Instead, you have to press the menu button at the top-right of the browser, then the zoom button down the bottom. Not very quick, not very clever. 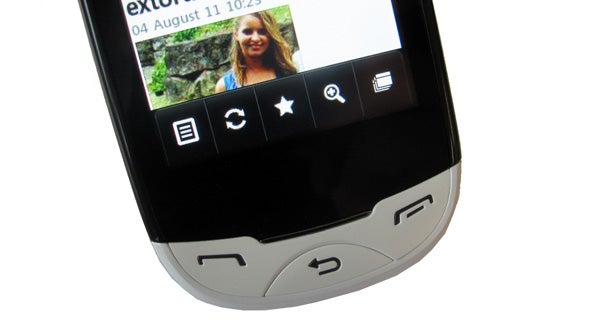 The camera is another victim of scrimping. With a fixed focus lens, 2-megapixel sensor and no flash, the shots it produces aren’t worth taking off the phone, even just to post online. You are given a few colour effects to play around with, the basics of sepia, black & white and negative, but these don’t add significantly to the camera’s usefulness.

One bonus the LG Ego can claim over the budget Android crowd is battery life. The 950mAh battery capacity is nothing special, but the simplicity of the OS running the show helps keep power usage down – it even takes evasive manoeuvres like disconnecting from Wi-Fi when the phone’s not used for a minute or two. Keep “push” features down to a minimum and it’ll last the best part of a week off a charge. 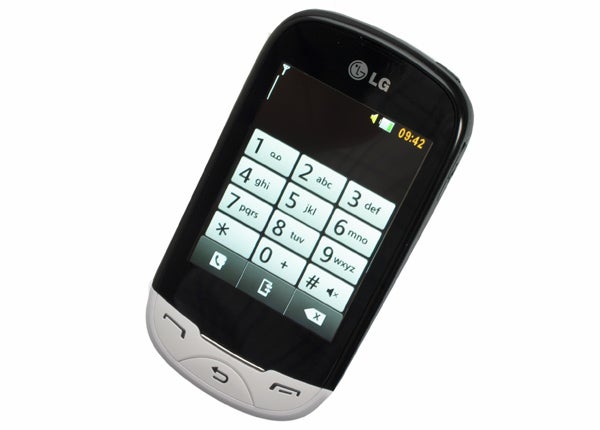 This merit only partly makes up for the many limitations and compromises that affect every-day use of the LG Ego though. Retailing for £75 on a pre-pay deal, there are several far better alternatives out there. Even the non-smart, two year-old Samsung Genio Touch trumps the overall experience of the Ego thanks to its half-decent capacitive touchscreen. We’d recommend picking a budget Android like the Samsung Galaxy Europa or Sony Ericsson Xperia X10 Mini over this any day – shop around and you should be able to find them at a similar price.

With 3G, Wi-Fi and a touchscreen, the LG Ego appears to have everything more expensive smartphones offer. But it doesn’t. The small resistive touchscreen makes navigation frustrating and the feature phone operating system rules-out the additional levels of customisation and app-based exploits available to Android smartphone users. A year or two ago, the LG Ego would have made a lot of sense, but now it’s way behind the pack.