While LG was keen to stress that its main CES 2015 story is its new OLED TVs, that OLED range isn’t yet extensive or affordable enough to enable the Korean brand to leave LCD behind. In fact, LG had a strikingly wide range of LCD sets on show, headed up by its rather confusing ColorPrime UHD series.

Why confusing? Because the ColorPrime name is used to describe two quite different colour technologies, and because LG is taking a more ‘neutral’ – as in, not wanting to place greater importance in one above the other – approach to these technologies than most rival brands.

First, let’s look at the two technologies involved. The most familiar to anyone who’s been following reports from CES is Quantum Dot technology – or rather, LG’s proprietary ‘nanocrystal filter’ take on Quantum Dot technology. The other is a wide colour gamut technology delivered by using different types of phosphor in the LED illumination system. 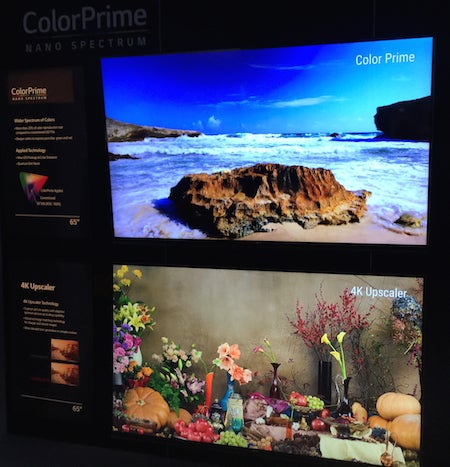 Actually, this latter approach is also common; Panasonic in particular is making much of its use of a similar system in its new TVs, and both Sony and Samsung have used wide colour gamut systems of their own on their 2014 high-end TVs. But LG seems so bullish about its own WCG system that, unlike other brands, it seems to be positioning its WCG sets as at least equal in picture quality to the Quantum Dot models.

In fact, in the configuration shown at CES the flagship WCG models, the UF9500 series, were arguably the premium option thanks to their use of new Auditorium stand designs. These feature striking curved shapes designed to reflect the sound from the down-firing speakers out towards the viewer for a more potent and immersive soundstage.

The bottom line, though, is that really LG doesn’t want to get involved in preferring one of its ColorPrime technologies over the other, stressing that both approaches are reckoned to deliver a colour gamut boost over normal LCD TVs of around 30%. Instead LG just wants consumers to understand that the ColorPrime sets will offer improved colour in different ways to suit different tastes.

What are those different tastes? On first impressions, the WCG sets appear to be the best options for serious cinephiles, delivering a less aggressively vibrant and bright picture than the Quantum Dot screens, focusing instead on producing a more subtly nuanced, natural palette. 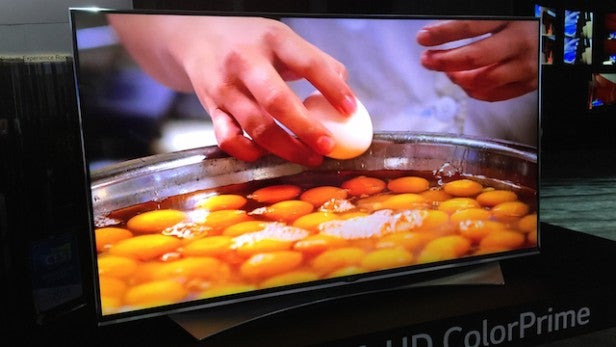 The Quantum Dot sets, meanwhile, produce a markedly more bright, vibrant picture that really pops off the screen and so could be the best option for a bright room. Or for people who just like their TV picture to be up in their face. The downside is that the extra colour boldness comes at the cost of some of the tonal subtlety seen on the WCG models, especially in particularly heavily saturated areas. I also felt more aware of the contrast weaknesses sometimes seen with LG’s IPS panels on the Quantum Dot models than I did with the WCG models.

It wasn’t possible to tinker with any of the settings on the ColorPrime models I was looking at, so maybe when we get to see these TVs under review conditions our first impressions might change.

Considered not just against each other but in the context of the wider TV CES showing, these LG TVs look like promising additions to 2015’s LCD fray. They appear even more appealing when you add in their use of LG’s highly attractive new ‘Art Slim’ design concept, still impressive webOS Smart interface, apparently improved 4K upscaling and, based on past experience, likely quite aggressive pricing.