Sounds a bit odd, doesn’t it, that a handset should be given the name ‘chocolate’. The name is meant to enhance the idea that this mobile phone is more than ‘just’ the fashion statement status to which many handsets aspire. It is being positioned as a phone with strong visual and emotional appeal to those who own it.


The tri-band Chocolate KG800 is the first in LG’s Black Label series of design lead handsets, and others are promised. In fact, we’ve already seen a white version of the Chocolate.


Visually the Chocolate KG800 is certainly different. It is not, as you might expect, brown, but a rather shiny black. Visually it looks much more like a portable music player than a handset, albeit about a third bigger than an iPod nano or Sandisk Sansa player at 95mm tall, 48mm wide and 15.2mm thick. As you’d expect from such tiny dimensions, this handset is light at just 83g. 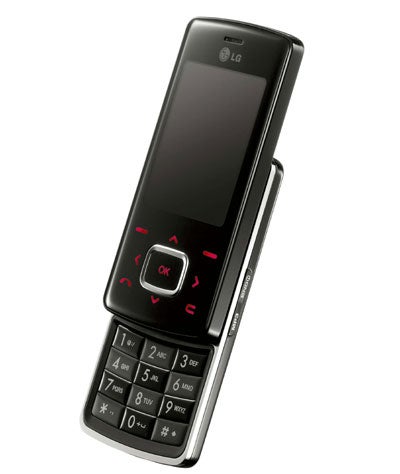 The iPod-a-like visual appearance is in part down to the fact that the front of the Chocolate KG800 is occupied by the LG logo, a screen that is recessed into the fascia and a silver rectangle which looks like a navigation button. There are no keys in sight and the general appearance is flat, black and sleek.


The comparison is also helped by the fact that the Chocolate KG800 is supplied with a soft drawstring pouch.


This all makes for very neat lines, but it is only half the story. The Chocolate KG800 is a slider with an extremely smooth spring loaded mechanism. When you push upper and lower halves apart a large number pad appears. But it is only a numberpad. There are no soft menu keys, no call and end keys, no other control keys.


These are all on the front of the casing, which, remember, I said was flat, black and sleek. On the left edge are volume control buttons. When you press the volume up button twice the 262 thousand colour, 2in screen switches on and red symbols appear on the front fascia. They also appear when you open the slider and are heat sensitive touch controls. The heat sensitive part is important as it means the controls can’t accidentally be operated when the handset is in a bag – they need the warmth of your finger.

The controls provide access to the soft menus, call and clear, and four way navigation. Each navigation button doubles up allowing you to switch profiles, jump to contacts, take you to favourite applications or functions, and cycle through shortcuts to messages, voicemail, your diary and alarms.


I didn’t find the controls quite as easy to use as I would have liked. The silver rectangle that looks like a navigation key isn’t. It just separates an ‘OK’ area from left, right, up and down areas. Touching it has no function apart from causing you to accidentally hit a control area when you don’t really mean to. And working in some modes, especially with the slider opened, it is too easy to accidentally hit something you don’t want to.


I found it odd but not an enormously big deal that the end call key which doubles up as the power key sits on the right edge of the casing instead of in its usual place under the screen. It was fairly easy to get used to the position, and if you do find it annoying you can just end calls by closing the slider. 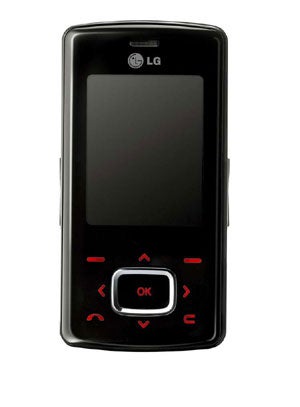 The side mounted end call key sits next to another key – this opens a screen menu that allows you to use the built in music player or camera. The idea of a dual purpose key is, I suppose, to save on the number of keys around the edges of the casing. That said, I think I’d still rather have two keys as the arrangement that LG has chosen means that it takes multiple presses to get to either feature.


With the slider opened it is two presses (the side key and then number pad key 1 for the music player, 2 for stills camera or 3 for video shooting). With the slider closed you have to precede these presses with two pushes of the volume up key which not only enables the front mounted touch buttons but also the camera/music player button.


The camera’s lens is protected inside the slider mechanism and is supplemented by a self portrait mirror and flash. It shoots stills at up to 1.3-megapixels, which is starting to feel rather long in the tooth compared to the two and 3-megapixel camera enabled phones available. However, there are some nice ease of use features such as quickly flicking through the effects menu while still looking through the screen viewfinder to see how they change your shot, and easily altering the white balance.

One major failing of this handset is that you have no way of expanding the internal memory. Now, there is 128MB of this designated as multimedia storage. This is fairly generous, but it is nowhere near enough for you to consider using the Chocolate KG800 as a substitute for a dedicated music player. At least copying music across is no problem as the handset functions as a USB Mass Storage device, and you get a cable in the box.


The music player supports MP3, AAC and WMA files, and LG has thought about people wanting to use their own headsets. A proprietary connector on the right edge of the casing is shared by mains power, but the cable terminates at a nicely designed remote control with a 3.5mm adaptor on one end. 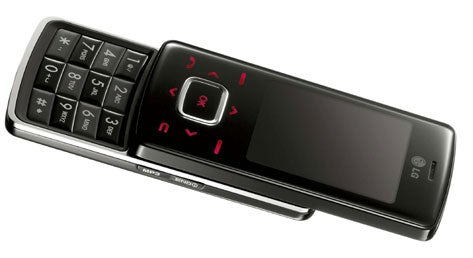 
LG quotes the battery life as 200 hours with three hours 20 minutes of talk. I found myself wanting to charge every couple of days just to be on the safe side, but didn’t use the handset much for mobile music playing simply because its memory couldn’t hold enough tunes for me to make a serious choice while out and about.


Apart from the annoyances I’ve mentioned already consider these: the handset picks up greasy finger marks really easily so you are going to need to do a lot of cleaning.


There is no speakerphone. Now, I don’t use a speakerphone very often, but I do regard it as one of the basics for any handset.


You can’t answer a call with the slider closed. You have to slide up to take incoming calls, and can end them by sliding down.


In the end, the Chocolate KG800 is much more style than substance. I found using the touch pad a bit irritating – accidentally pressing its keys when using the handset with the slider open is very annoying. Also, the handset’s amazing ability to pick up grease from my fingers spoils the effort that LG has put into the design.


Ultimately, the KG800 Chocolate is a nice looking phone. It really is. It’s just a bit impractical at times, and short on some important features.