LG has a wide selection of 3D-capable TVs in its range, so naturally the Korean company has brought out a 3D Blu-ray player to go with them. But 3D aside the BX580 is packed with features – just like the rest of LG’s Blu-ray machines in fact – and although the £217 price tag isn’t exactly peanuts, it’s cheaper than 3D players from Samsung and Panasonic, which could give it an advantage in this burgeoning area of the market.


The player itself is surprisingly slim and compact, but nowhere near as eye-catching as LG’s BD570. The front panel is one long semi-transparent flap that covers up the clutter, giving it a minimal look. Pull it down and you’ll find a disc tray, a selection of playback keys and a USB port, while a couple of blue lights either side of the Blu-ray 3D logo are a nice touch. It’s just a shame that LG couldn’t have sprung for a bigger display panel, as the poky digits are a little hard to read.

Looking at the back, there’s disappointment right off the bat. LG has provided one HDMI v1.4 output, which won’t be very helpful to people who want to listen to HD audio soundtracks alongside 3D movies, but don’t have HDMI v1.4 sockets on their AV receiver. The Panasonic DMP-BDT300 is the only deck we’ve encountered so far to provide a second HDMI output, which allows you to pipe pictures and sound separately, but it’ll set you back at least £100 more.


Other connections include component, composite, analogue stereo and two optical digital audio outputs (coaxial and optical). Alongside them is an Ethernet port, which is provided for those who prefer to make a wired connection to their Internet router. But if you’re running a wireless router at home then you can take advantage of the deck’s built-in 802.11b/g/n Wi-Fi support.

Using either method you can download BD Live content, stream media content from devices on your home network (this player is DLNA certified) and delve into on-demand content using LG’s NetCast feature. NetCast only features three sites at present – YouTube, Picasa and AccuWeather.com – which pales in comparison to Sony and Samsung’s latest players, but YouTube alone might be enough to keep you occupied. The NetCast interface is gorgeous, placing the three icons on a brightly-coloured graphic of a street, plus the browsers for each site boast an attractive and logical design, but this smart presentation can’t quite gloss over the dearth of compelling content.


DLNA networking is a really useful feature if you have music, video and pictures stored on various drives and PCs around the home, and thankfully LG’s simple setup procedure and user-friendly folder-based layout make it blissfully easy to use. You can play an unusually wide range of formats, including container formats like MKV, MP4 and AVI, plus DivX HD, MP3, WMA and JPEG, plus the deck’s 802.11n compatibility is a boon for those who want to stream hi-def videos. The same file types can be played from USB devices plugged into the front-mounted port, although this port must also be used to provide memory for BD Live downloads – we’d have preferred a second port on the back solely for that purpose.

Another neat feature is Audio CD recording, which allows you to rip tracks from CDs onto a connected USB device. There’s a choice of 128k, 192k, 320k and lossless quality, plus when you insert a CD the deck looks up the details on the Gracenote Media Database, but you need to be online for this to work. The BX580 also carries out all the standard Blu-ray player duties such as decoding Dolby TrueHD and DTS HD Master Audio soundtracks to PCM and outputting hi-def video at 1080/24p.

Accessing the BX580’s wealth of features is easy thanks to the thoughtfully designed onscreen menus. The Home menu looks great, using the same innovative design as the BD570. The background is a tank of rippling water and each of the options (Movie, Photo, Home Link, Setup etc) is a bobbing block of ice containing the relevant icon. As noted on the BD570, it’s a little slow to react to remote commands but only by a split second or so. The setup menu is a simpler affair, using a block in the middle of the screen listing all the options, but it’s easy to follow and contains all the crucial tweaks like HDMI audio options and video resolutions.


The remote is coated in a fetching gloss-black finish and poses no problems at all. The playback keys are nicely clustered in the centre, just above the intuitively arranged menu controls. The buttons are large and clearly labelled, plus they press down with a nice, responsive click. A cluster of keys at the bottom allows you to control LG TVs. 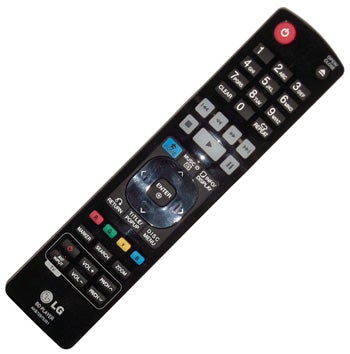 Hit the Info/Display button on the remote and a box appears on the left hand side of the screen, showing you all of the current settings and allowing you to access a range of picture presets (Vivid, Movie and Standard) as well as a User setting that lets you change the levels of contrast, brightness, colour, sharpness and noise reduction in the picture. 3D settings are virtually non-existent, amounting to a 3D Mode on/off option in the setup menu – everything is handled automatically, which is great for beginners.

To test 3D performance, we got our hands on LG’s Infinia 55LX9900 LED TV and a pair of the necessary active shutter glasses, and then put Panasonic’s ”Ice Age 3” disc back in the tray. The opening sequence, showing Scrat chasing that elusive nut in glorious 3D, is a wondrous sight. The first thing to note is that the image is comfortable to watch, making it easy for your eyes to adjust to the different layers and moving objects.


After your eyes have adjusted, you can really immerse yourself in the BX580’s pictures. When leaves flap up in front of the camera or when Scrat pokes his snout round the side of the tree, the 3D effect is utterly convincing, but it’s at its best during long shots of snow-covered landscapes, where you can gaze in wonder at the different layers of trees and rocks stretching back towards the horizon. Great stuff.

As Scrat and his female counterpart dive into the chasm, the sense of perspective and depth is palpable. The impact of the deck’s 3D is boosted by remarkably sharp detail reproduction and lack of distracting noise. It’s not perfect – look closely and you can detect some ghosting on some of the trees in the background and where dark objects meet bright backgrounds, but it’s nowhere near as bad as Samsung’s TV/Blu-ray combo.


Another downside is that our ”Ice Age 3” disc kept breaking up and crashing on the BX580, something it never did on the Panasonic DMP-BDT100. On one occasion, it even caused the LG to turn itself off.


As a 2D player, the BX580 is a decent if not outstanding performer, displaying the same sharp detail reproduction it demonstrated with 3D playback. With demanding discs like ”Watchmen” or ”The Dark Knight”, the image is solid and punchy but subtle when it needs to be, particularly when it comes to colour shading and blends, while motion is smooth as an oiled eel and there’s no noise to speak of. Some players dig out a little more detail though and some areas of the image seem slightly unnatural.


It also displays most of the Silicon Optix HQV Blu-ray convincingly, with no fail-worthy flaws to report in the jaggies and Video Resolution Loss tests. But there’s some nasty strobing in the Film Resolution Loss test and some severe flickering in the lower tier of seats during the pan across Raymond James stadium, plus some significant moire patterning on the upper tier.


As a CD player, the BX580 does a solid job, injecting albums like Adele’s ”19” with enough warmth and vocal purity to please casual listeners, and movie soundtracks piped as PCM to a receiver sound identical to the bitstream delivered version.


The BX580 has a lot going for it. It’s teeming with tempting features, most notably 3D playback and built-in Wi-Fi, and a terrific range of networking features, plus its 3D performance is impressive – not quite as impressive as Panasonic’s systems mind, but its sharp and absorbing 3D pictures are still enjoyable. It’s a little shakier with 2D material, some sluggishness besets the operating system and you only get one HDMI output, but with a much lower price tag than its 3D player rivals, you might be prepared to make a few sacrifices.