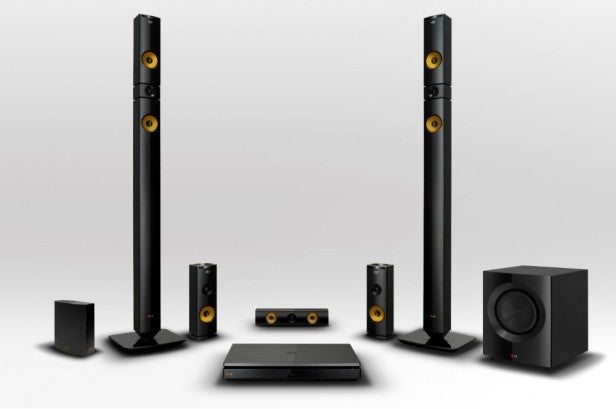 As LG’s flagship home cinema system, its feature list naturally reads like a home cinema A to Z, while wireless rear speakers reduce cable clutter in your living room. But the best part is the sub-£700 price tag, which seems remarkably reasonable for such a well-specced system.

The BH9430PW’s speakers are the major aesthetic talking point. At the front is a pair of tallboy speakers, each one standing a mighty 130cm high, which will make them an imposing feature in any living room. Thankfully they’re beautifully styled in a lustrous gloss-black finish, broken up by a brushed section that houses the tweeter. 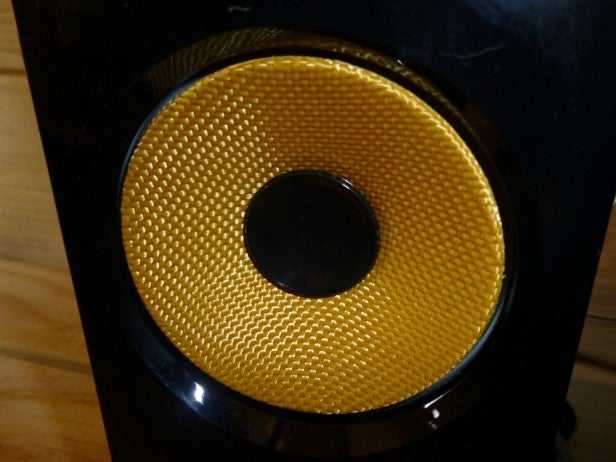 The yellow speaker cones peering out from the cabinet are fashioned from Aramid Fibre – chosen for its ability to reduce sound distortion – and form a gorgeous contrast with the black finish. On top is a silver cap that houses the upward-firing top driver, another eye-catching embellishment.

The 292mm-high rear speakers are like mini versions of the towers, designed to sit on shelves or furniture. They rock the same yellow speaker cone, tweeter and upward-firing driver. The horizontally-aligned centre speaker features two Aramid fibre cones and tweeter.

All of the speakers are plasticky to the touch but they still feel weightier and more robust than most one-box system speakers, easily living up to their premium billing.

The subwoofer’s compact dimensions should make placement easy, and with its gloss-black front panel it’s not bad looking either. But, as is usually the case with all-in-one systems, it’s passive, and the lack of internal amps and electronics makes it feel light and empty when you pick it up.

The wireless receiver is styled to match the speakers, but it’s still a fairly big box to accommodate at the back of the room and there are still cables involved, which begs the question – does it really cut down on clutter?

The brains of the operation is the Blu-ray receiver, which belts out a quoted 1,460W from its built-in amp and decodes almost any audio format you can throw at it. It’s a stunner on the outside, combining a luxurious gloss black casing with a brushed top panel that creates a sort of two-tiered effect.

But here’s the cool part – the gap between the two tiers contains a discreet disc slot, while the jutting bottom section creates a platform for illuminated touch-sensitive controls. The left hand side of the fascia drops down to reveal a USB port for playback of media files from flash drives, while a scrolling LED display on the right confirms selected inputs and sound modes. Build quality is decent enough, although the lower section feels a little plasticky.

LG really goes to town on the rear panel, offering two HDMI inputs for running other HD sources through the system, plus an output for connection to your TV. These are joined by optical digital and analogue stereo inputs, an Ethernet port, an FM aerial input and a second USB port that lets you play media files from an external hard-disk drive. The speaker terminals are colour-coded plugs.