If you want to bring the cinema experience home then you don’t just need a big screen TV or projector, you also need a proper surround sound system to deliver cinema-sized sonic thrills. The LG BH7420P is a home theatre kit that’s designed specifically to work well in larger rooms. Despite this, it’s still very affordable, available online for around £380. That compares well against the likes of Samsung’s HT-E6500W, which weights in at around £600, or Panasonic SC-BTT590, which is priced at about £500.

The LG BH7420P is a 5.1 channel system with a built-in 3D Blu-ray player and an amp that’s claimed to pump out 1100 watts of power. It also includes Smart TV features, such as Support for BBC iPlayer, as well as digital media playback via USB or across a network from DLNA servers. 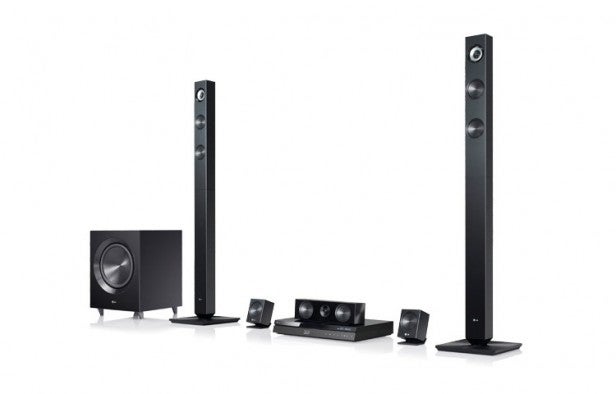 The 5.1 set-up includes two floor standing towers for the front speakers. Each of these has twin main drivers and a single tweeter. The horizontal centre speaker also has the same speaker driver set-up, while the two square, bookshelf speakers used for the rear channels make do with a single driver and no tweeter. For low frequencies effects LG has included a 200 watt subwoofer, which is passive (non-powered), rather than active (powered), but that’s not unusual on these types of systems.

Stylish design
The speaker towers are made from plastic, but the glossy coating on the front and the exposed driver design makes them reasonably attractive to look at. The small size of the rear speakers will also be a boon for many as it makes them relatively easy to position on smaller bookshelves or occasional tables if the other half won’t let you mount them on the walls.

The BH7420P ‘s main unit is also pretty stylish thanks to its two tone colour scheme with glossy black used on the top part of the unit that houses the display and a brushed aluminium finish used on the lower half where the touch buttons are mounted. Its build quality is good too, and it feels very solid when picked up. 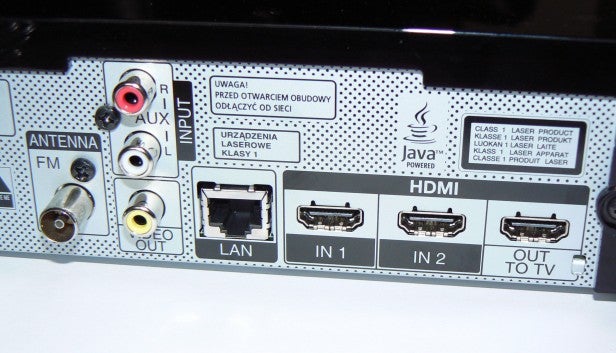 Around the back you’ll find three HMDI ports. One is used for feeding video from the unit to your TV while the two others let you run your other HD gear through the system. There’s also a composite video output as well as both analogue stereo audio inputs and an optical digital audio input. Naturally, LG has added an Ethernet port for the Smart TV features, but as Wi-Fi is built-in most people are likely to use that instead. On the front you’ll find a mini-jack audio input as well as a USB port. Both of these are hidden behind a pull down flap just under the Blu-ray slot loading mechanism. 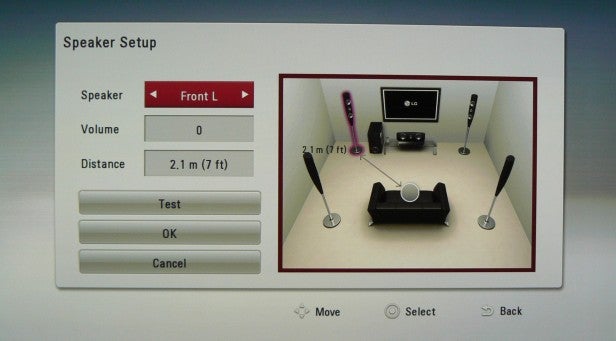 Setting up the LG BH7420P is pretty straightforward and LG has colour coded the speaker cables and speaker connections on the rear of the player to make it as easy as possible. However, it hasn’t colour coded the connection on the actual speakers, so there’s still some room for error. Also, unlike the Sony BDV-E880, it doesn’t have an auto calibration mode, but you can adjust the distances and levels yourself from within the speaker setup menu.

Media skills
The LG BH7420P is more than a mere Blu-ray player, with an amp attached. LG is pitching it as the device that can take care of pretty much all your entertainment needs. Along with the 3D Blu-ray playback, it can also be used to play digital media on optical discs, drives plugged into its USB port or across a network from PCs or NAS drives with DLNA servers. The USB port can also be used to dock your iPhone, iPod or iPad with the system and naturally the player supports Smart TV apps too, including BBC iPlayer.

Its digital media support is actually very good as it plays a pretty wide variety of formats. For example, on the video front we tried it with a range of Mkv, Divx, Xvid and MP4 files and it played them all without any problems. Audio wise it support MP3, WMA and AAC tracks. It also plays Flaac files, but only locally from optical disc or USB driver. For photos, it will work with Jpg, Png and Gif formats.

iPods, iPad and iPhone are supported for music playback only, so you can’t watch videos through the LG BH7420P and you have to use your own cable with the player as it doesn’t come with an iPod dock.

Smart functions
LG’s Smart Apps are accessed from two separate menus. The main apps are found in the Premium menu, while all the others are located in the LG Apps menu. There’s a good selection of premium apps available, as alongside BBC iPlayer, there are also apps for both the LoveFilm and Netflix movies streaming services. Acetrax and Blinkbox are also supported as well as CineTrailer and Accuweather. In the LG Apps menu you’ll find some less essential apps, but there are a couple that are worth a download including DriveCast which lets you access your drop box account from the player. All told, it’s a pretty good showing on the Smart app front. 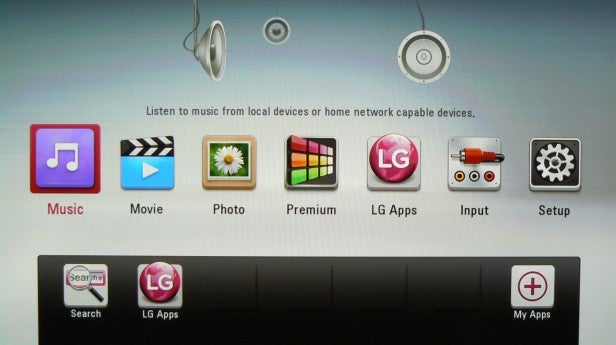 The player’s overall user interface is also very inviting and easy to use, putting Panasonic’s current system to shame, for example. It’s built around a homescreen that has large icons to give you access to the various menus and features. Interestingly the first three icons are for Movie, Photo and Music and when you enter these menus it shows you all the sources for this type of content. So, for example, when you open the movie menus you’ll see the Blu-ray deck listed as an option alongside any drives attached to the USB port and all the DLNA servers on your network. This makes it quick and easy to get at the content you want to play.

Good 3D performance
As a 3D Blu-ray player the unit puts in a very solid performance. It’s good at retaining detail even in trickier scenes and motion is on the whole quite nicely handled. 3D pictures are also top notch as it does an excellent job of conveying the sense of depth in titles like Tron Legacy.

Naturally the system can decode Dolby True HD, Dolby Digital Plus and DTS HD Master Audio, and there’s a range of generally quite good DSP modes for upscaling stereo music to surround sound. 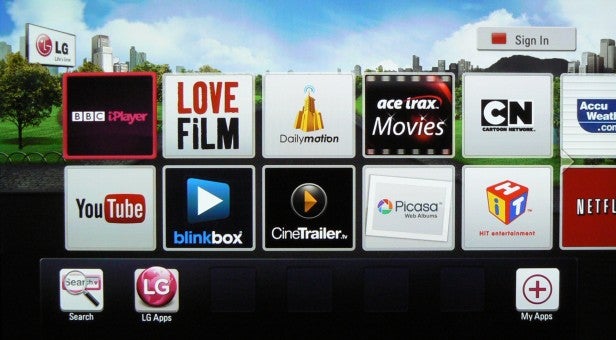 Its surround sound performance with movies is also a cut above the norm. It’s able to comfortably fill even larger sized rooms with thunderous audio and when faced with even the most sonically chaotic of scenes, it manages to delver good separation between the different sounds in the mix.

It has strong dynamic range as well, coping admirably with sudden switches between loud and quiet sections on soundtracks, and the sub actually blends in well with the rest of the systems speakers, so the low frequency effects it produces sit nicely in the mix.

If the LG BH7420P has a failing on the audio front is that cymbals and other high frequency sounds in music can sometimes seem a little over pronounced and brittle, but this fault only raises its head quite rarely.

There are a couple of other little niggles with its operation though. Some of the features can be a bit sluggish to use. For example, it can take a long time to open folders when you’re browsing network content on DLNA servers and the Smart apps are generally slow to start up too. Also, it only has an FM tuner, whereas some other system now have DAB tuners onboard.

Verdict
The LG BH7420P is an affordable home theatre kit that also happens to be very satisfying to use. It looks quite stylish, produces strong visuals and packs a potent sonic punch.  It also boasts a good line-up features, including a strong showing on the Smart app front. In fact, it’s only real failing is that its can sometimes feel a little bit sluggish.