Nowadays it’s not enough for home cinema systems to simply sound great – they also have to look the part in order to blend in with your living room décor. That’s something LG has taken on board with the BH5320F, an incredibly stylish 2.1-channel Blu-ray system with a ‘floating’ design that will really turn heads.

But of course there’s much more to this system than just style. It’s equipped with a wide range of cutting-edge features, such as built-in web apps and network support, and naturally it plays 3D Blu-ray discs, DVDs, CDs and USB devices too.

Design
But let’s get back to that delicious design. The main unit, which houses the Blu-ray player and 400W amplifier, is a thick rectangular block with an open section on the left-hand side. The black front panel is flat, with a panel of illuminated touch-sensitive controls embedded into it, while further right is a dot matrix display panel showing the selected input, elapsed time and other pertinent information. Around the edge is a silver frame that juxtaposes nicely with the black front panel, with a disc slot located discreetly on the right hand side. 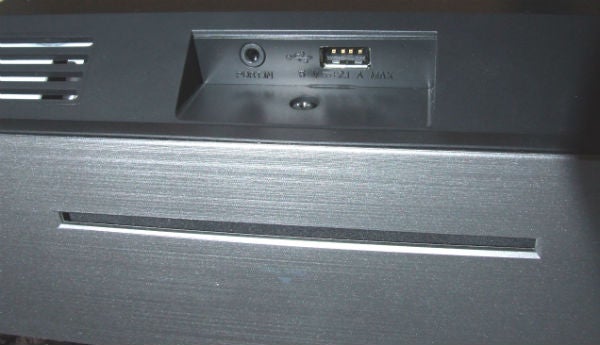 The speakers mimic the main unit’s design, with the same blocky shape, silver frame and open section at the bottom. They’re fairly large but not imposing, with a black mesh on the front keeping them tidy and minimal. Placed together, the system looks stunning, a refreshing break from the black-box norm. Even the subwoofer gets in on the act, sporting the same black and silver colour scheme and a sumptuous glossy front panel. It’s compact too, which makes installation a cinch.

Connections
The unconventional design of the main unit means connections aren’t as plentiful as a normal system, and they’re dotted around awkwardly on the back. On a sideways-facing panel is an HDMI 1.4 output (but no inputs), composite video out, two optical digital audio inputs and an Ethernet port, plus springclip speaker terminals and an input for the FM radio aerial. On the opposite site you’ll find a USB port, which supports flash drives, external HDDs and direct connection of Apple devices, and a 3.5mm minijack input for other types of MP3 player. 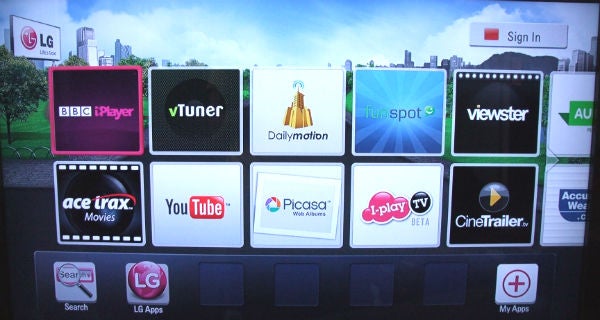 It’s not a killer selection by any means, and like Viera Connect it could do with a couple more TV catch-up services, but the presence of BBC iPlayer and YouTube alone makes it good value. Weirdly it’s accessed by selecting an icon on the central Home menu labelled ‘Premium’, but there’s a separate icon labelled ‘LG Apps’ which is supposed to offer a other games, videos and lifestyle apps, but a dialogue box informed us that we weren’t able to access it in our country.

This internet service, and all of the system’s network features, can be accessed using its built-in Wi-Fi connection, which eliminates the need for pricey dongles and cumbersome Ethernet cables. 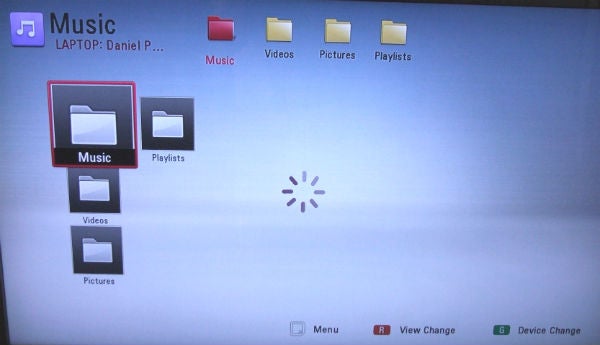 The DLNA-certified LG BH5320F can also play music, video and photos from devices dotted around your home network through its Smart Share feature, or play them directly from flash drives and external HDDs connected to the USB port. The system even supports Wi-Fi Direct, theoretically making it even easier to share media from mobile devices, plus there’s an Apple/Android app that lets you control the system with a smartphone or tablet.

And like previous LG Blu-ray players and systems, the BH5320F plays a wide range of formats, playing everything we threw at it – including hi-def MKV, DivX, WMV HD, AVI, MPEG-1, AVCHD, XviD, MP3, WMA, WAV, AAC and FLAC lossless. The menus for playing these back are clear, simple and responsive, showing cover art where available.

As well as the regular Dolby True HD and DTS HD Master Audio recoding talents, the system offers a range of sound modes to add extra spice to the 2.1 sound, chief among which is the 3D Surround Processor. This is supposed to deliver a more immersive sound from the stereo speakers, and is available in Movie and Music settings.

Operation
Setting up the LG BH5320F is easy. All the speaker cable you need is in the box, which is helpfully colour coded and fits snugly into the easily accessible springclips on the main unit. Fire up the system and the onscreen setup procedure is equally simple.

An initial installation wizard launches straight into the network setup mode, which is simplified greatly by the use of cute graphics and helpful explanations. Then you’re left to your own devices as there’s no auto calibration, but it’s easy to tweak the sound using the dedicated Speaker Level button on the remote and the left/right keys.

The Home menu is your starting point for everything, and looks wonderful – bright, vivid and engaging, but much simpler than the fussy animated LG displays of old. The coloured icons are big and easy to identify, three of which provide direct access to Music, Movie and Photo  – select one of these and it shows you which of the connected sources contain that type of content.

The rest of the GUI, from the straightforward settings menu to the great-looking web and DLNA menus, are designed for maximum user-friendliness.

DLNA streaming wasn’t all plain sailing though. The system happily found our laptop on the network, but when we tried playing some music it had real trouble streaming it – the loading screen froze with no signs of life, so we gave up. This isn’t the first time we’ve had trouble network streaming from an LG product, but we’ve had no problems with recent rival systems from Panasonic or Samsung.

Despite being much longer than your average zapper, the remote is superb. The buttons are laid out for maximum convenience – the volume control is slap bang in the middle and raised up slightly on a bump, with the direction pad jut below it. All the keys are clearly labelled too, and there’s a cluster of buttons at the bottom that control LG TVs.

Performance
Slide a Blu-ray disc into the slot and the LG BH5320F conjures up impressive sound quality. Rise of the Planet of the Apes sounds wonderfully crisp and detailed but with a decent amount of punch in the low frequencies and excellent dialogue clarity.

The opening scenes showing the apes being captured in the rainforest is awash with tiny details like rustling leaves and distant voices. And the following shots of the lab are also nicely handled, with real-sounding dialogue and an atmospheric backdrop.

When the action hots up, so does the LG. As the chimp goes ape and escapes from its cell, it smashes into doors, smashes trolleys to the floor and jumps from table to table in the lobby with a satisfying thump. The score is urgent and dramatic, and when the chimp smashes through the boardroom window the crashing glass sounds clear and realistic. All of these effects are conveyed with drive and attack without sounding overly bright, although some of the chimp’s shrieks are a little shouty at loud volumes.

We had to reduce the subwoofer level from the factory setting, but afterwards it did a decent job, injecting the security guard’s fatal gunshots with just enough bass to make an impact without overpowering the satellites. On the whole the BH5320F’s sound quality is hard to fault – sure it’s not the most refined or insightful we’ve ever heard, but for a one-box 2.1 system it’s surprisingly good, and certainly better than the Panasonic SC-BTT182.

It backs up its impressive sound performance with top-drawer pictures. The movie’s super-detailed CGI looks razor sharp and noise-free, with fluid motion tracking, solid blacks and a convincing colour palette. 3D pictures scrub up equally well, with clearly defined layers within the image and no artefacts to sully the experience. Panasonic’s pictures have a little extra poise, but on the whole you’ll be hard-pressed to find any flaws with these pictures.

BBC iPlayer videos look juddery but that aside the clarity of the hi-def images is superb, likewise our hi-def MKV files. YouTube videos stream smoothly without constant buffering.

Although the LG BH5320F costs a little more than some of the less stylish 2.1 systems we’ve tested recently, it also provides better sound quality. And an altogether very pleasant interface.

Verdict
The LG BH5320F is one of the most stylish systems we’ve seen for a long time, with a striking design that sets it apart from its rivals. Hats off to LG for daring to do something different. But it’s much more than just a pretty face – it’s also bursting with features and musters superb sound quality with Blu-ray movies. Sure it lacks the polish of decent dedicated speakers yet there’s enough detail and depth in the sound to please most movie lovers.

We did have a problem streaming files over a network and some of the web features were out of bounds, which takes a little of the shine off, but otherwise this is a terrific 2.1-channel system.