Along with hi-def picture quality, BD Live has always been touted as one of the main incentives to upgrade to Blu-ray from DVD, but so far it’s failed to capture the public’s imagination. Aside from its painfully slow arrival onto the market and the inconsistent quality of the content, the main problem is that most Profile 2.0 players make it awkward to access, using unwieldy Ethernet connections or pricey USB dongles to connect to the web. When it comes down to it, most Blu-ray users simply can’t be bothered.


But LG’s latest Blu-ray deck is set to change all that. It’s the first player on the market to offer built-in Wi-Fi (courtesy of an IEEE 802.11n wireless module that also supports the b/g standards) which makes the process of downloading movie extras a complete no-brainer. And with 1GB of built-in memory you don’t need to plug in a USB drive to store content either. Result!

As an added bonus, the BD390 is DLNA certified and allows you to stream videos, music and photos from PCs on your home network – a more convenient way of accessing your content than copying it to USB sticks or discs.


Incredibly, that’s only the tip of the iceberg – the BD390 packs more feature firepower than any other similarly-priced rival, and that includes the brilliant Samsung BD-P3600. Besides Blu-ray, DVD and CD playback, the BD390 supports DivX HD, MKV, MP3, WMA, AAC, MPEG-4 (AVI) and JPEG from USB hard-disk and flash drives, as well as AVCHD from discs – a range of playback talents that most decks at this price can only dream of.

And then of course there’s YouTube access, which is made all the more convenient by the wireless web connection. Like the BD370 before it, you can enter the dedicated portal on the deck’s Home menu and watch clips of dogs on skateboards on your TV rather than a poky PC monitor.


But beneath these fancy features lies a very capable Blu-ray deck, which performs a full range of less glamorous yet equally important functions. It can deliver 1080p pictures at 24 or 50 frames per second to a compatible display, as well as outputting Dolby True HD and DTS HD Master Audio bitstreams to a compatible AV receiver. It can also convert these HD audio formats to multichannel PCM and output them via HDMI, or through the 7.1-channel analogue outputs on the back (yes, it’s even got those). 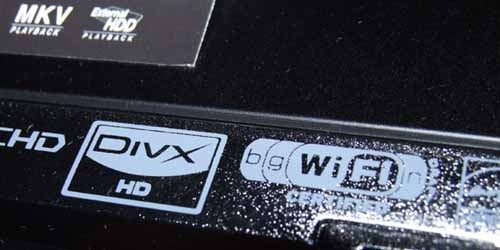 All of these features are bundled up inside an attractive and robustly built unit, which is chunkier than the BD370 but not excessively so. It catches the eye with a dark, mysterious fascia, embedded with just four buttons, a USB port and a fairly informative display panel. Along the top is a silver strip that barely has enough room to display all the deck’s logos.


Aside from the afore-mentioned HDMI and 7.1-channel outputs, the busy back panel sports component, composite and stereo audio outputs, as well as both optical and coaxial digital audio outputs. An Ethernet port is on hand for those who don’t use a wireless router to connect to the internet.

LG has provided a fairly generous set of picture adjustments in the Pic Mode menu, although it’s not in the same league as ‘videophile’ players from Pioneer or OPPO. You can alter the levels of contrast, brightness, sharpness and saturation, as well as alter individual colours. It’s backed up by Dynamic Contrast, block/mosquito noise reduction and black level settings.


LG’s operating system is up there with Sony’s Xross Media Bar for sheer useability, making the entire onscreen interface look distinctive and modern while retaining an innate sense of logic and simplicity.

The Home Menu, for example, presents the various options with bright colourful icons and animations, making it easy to find what you’re looking for. It splits your content into Movie, Music and Photo, while the My Media icon is where you find the content on your home network. It’s just a shame that the Home menu can’t be accessed without stopping the movie, which loses your place in the film if there’s no resume mode.


The excellent layout proves invaluable when using the setup menu, as the deck’s advanced spec means there’s a lot of options that you may not have encountered before. The potentially nightmarish Network settings are actually quite simple – just choose whether you want a wired or wireless connection. Select the latter and the deck starts searching for an access point straight away. All of the key video and audio settings are clearly signposted, and if the 1GB of built-in memory isn’t enough, there’s an option to use a USB memory device instead. 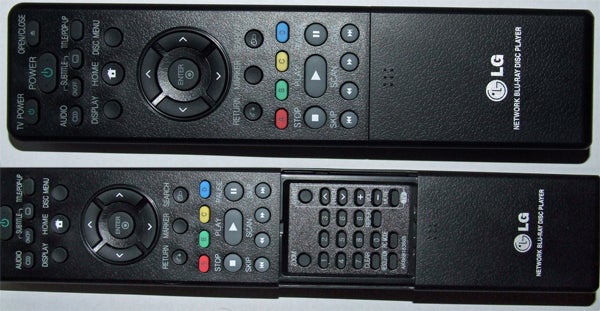 The supplied remote is radically different to LG’s previous Blu-ray handsets in that the lesser-used buttons are hidden under a sliding flap at the bottom, making the main controls less cluttered. Everything is well labelled, and the conveniently-sized buttons press down with a satisfying click. Good work, but after OPPO’s player opened our eyes to the joys of a backlit remote, nothing else seems good enough…


In terms of disc loading speed though, the BD390 shaves a good ten seconds off the BD370’s time – we clocked Spider-Man 3’s first video screen at 27 seconds. It’s speedy in other ways too, offering six different search speeds that kick in without annoying delays, and the menu cursor is responsive.

We were keen to check out the BD390’s Wi-Fi functionality, which worked fine but was frustratingly slow at times, particularly with BD Live – although this can vary depending on your broadband connection. The access point search found our wireless router immediately and after punching in the password it was ready to roll.


We loaded up The International on Blu-ray to check out what bonus goodies were available, and after seven minutes we were about to give up when Sony’s BD Live screen appeared – we ended up watching a featurette about Angels and Demons. After that we chucked Transformers in the tray and the process was a lot quicker – the exclusive web video clips loaded up quickly and played through without any major hold-ups.


Next we tried the network functionality, which also worked smoothly. LG supplies Nero MediaHome 4 Essentials software in the box for this purpose but you don’t have to use it – we stuck with Windows Media Player 11. The BD390 found both PCs on our network in no time and we were able to stream music, videos and photos without any hassle, plus the menu screens used to select and play files are a joy to use. Likewise YouTube, which uses a clear and logical layout and loads up clips quickly, which can be expanded to full screen if you wish.

When playing a Blu-ray movie, the BD390 does a superb job. With The International, it transfers the digital 1080p/24 video signal to our Toshiba test TV over HDMI without introducing any problems or glitches, resulting in a pin-sharp, punchy picture that will absolutely blow you away.


The International is a great showcase for the LG’s talents. It renders stubbly faces and detail-packed shots of European cities beautifully, and there’s an aerial shot of New York in Chapter 2 that boasts jaw dropping depth and clarity. The juddery camera pans are a bit of a niggle but there isn’t much else to complain about.

Bright colours are rich and vivid, while skin tones boast a natural balance. The expansive contrast range allows for good, clear definition during dark scenes and black depth is excellent. Play about with the picture settings and you can achieve a much more satisfying balance than the ‘standard’ setting, but avoid the Mosquito Noise mode as it blurs the picture and reduces detail, making the picture look only marginally sharper than a DVD transfer.


Further evidence of the LG’s silky video processing is provided by its near-flawless handling of the Silicon Optix HQV Blu-ray and DVD – making this a terrific choice if you intend to use this deck for your SD discs as well as your shiny new HD ones.

Audio performance is excellent. There are no problems with the deck’s PCM decoding of Dolby True HD or DTS HD Master Audio, and through the multichannel analogue outputs the sound is an absolute riot – piercing effects, rich bass and forthright dialogue fire at you from every angle, and sonic detail is sharper than a Jimmy Carr put-down, without any similar risk of being offensive.


Quite simply, the BD390 is the deck that does it all, boasting a ludicrously lengthy list of features that beggars belief at this price. We thought the OPPO BDP-831 was generous but the LG makes its spec sheet seem positively miserly.


Built-in Wi-Fi is the obvious star attraction, but DLNA-certified networking, YouTube access, built-in memory, extensive format support and versatile USB playback seal the deal. And that’s before we’ve even mentioned the ultra-speedy disc loading, brilliant operating system and impressive picture quality – all of which makes this without doubt the best value Blu-ray player on the market.