We recently reviewed LG’s BD300, an attractively-priced Blu-ray player that might not offer the best picture quality ever seen but makes up for it with quick disc loading times, a generous feature list and BD Live support. Then at this year’s CES, the Korean company unveiled the step-up BD370, which doesn’t hit the shops until April but we’ve managed to get our hands on a sample for the UK’s first test.

The most exciting new feature found on the BD370 is video-on-demand courtesy of YouTube. Using the deck’s built-in Internet connection, you can access the site’s videos and watch them on your TV as opposed to a poky PC monitor. It’s the first time we’ve seen Blu-ray’s Internet functionality being used for something other than movie-related extras or firmware updates, and on that basis it’s a pretty significant step. 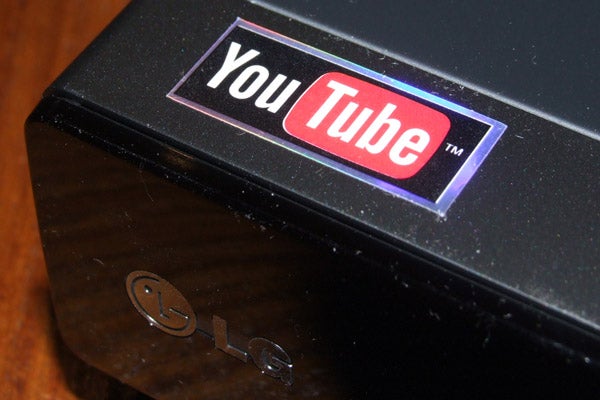 However, unlike the US version of the BD370, you can’t access films on demand, mostly due to the lack of online download sites like CinemaNow and Netflix in this country. But of course the UK BD370’s Profile 2.0 spec means you can do all the usual BD Live tricks, such as downloading new content and chatting online with fellow film fans, as well as enjoying BonusView picture-in-picture commentaries. Finding all this functionality on a deck costing just over £200 is quite remarkable, and suggests that we could have a real bargain on our hands. 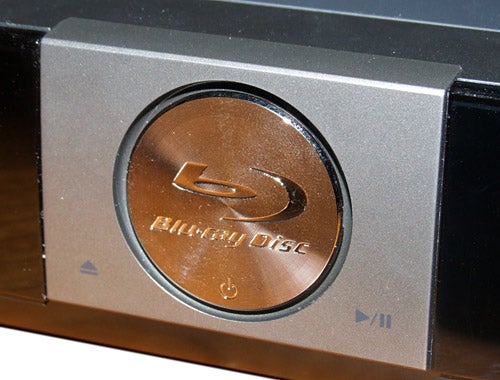 And we’re sorry Pioneer and Samsung, but the BD370 is possibly the best-looking Blu-ray player we’ve seen so far. Not only is it slim, sleek and adorned with a glossy black fascia, but it also boasts a large silver power button in the middle of the fascia, which is engraved with the Blu-ray logo and glows blue when the player’s turned on – how cool is that? 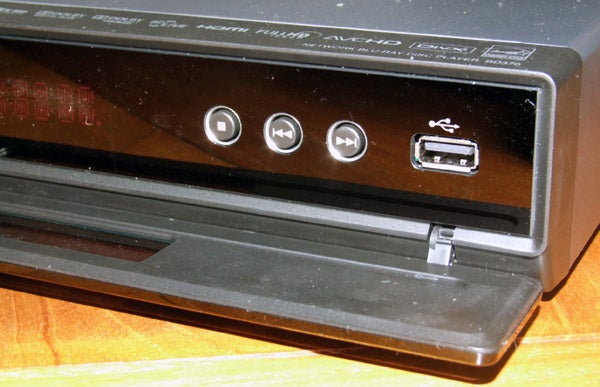 It’s surrounded by a grey panel that houses the Eject and Play buttons, but otherwise it’s a fairly minimal affair. The display panel is large and easy to read, and the transparent panel in front of it drops down to reveal chapter skip and stop keys, alongside a USB port that allows you to expand the unit’s memory capacity with a flash drive (for BD Live downloads) as well as play back DivX, MPEG-4, MP3, WMA and JPEG files. 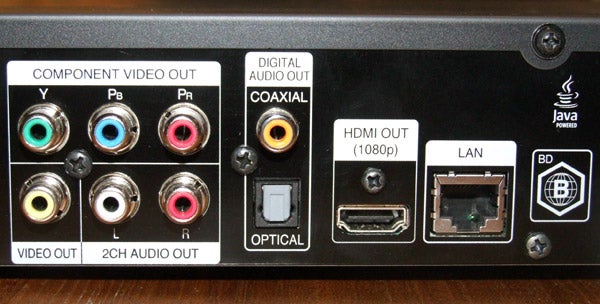 On the back you’ll find all the usual socketry suspects, including HDMI, component, composite, analogue stereo, coaxial and optical digital audio outputs, alongside the all-important Ethernet LAN port that connects to your Internet router. Based on what it unveiled at IFA, there’s a good chance LG will launch players with built-in Wi-Fi and local storage in the UK later this year, but for now you’ll have to put up with LAN cables and USB sticks.

On the audio side, the player’s decoding capabilities are similar to the BD300 – you can feed raw Dolby TrueHD, DTS HD Master Audio and Dolby Digital Plus bitstreams to an AV receiver over HDMI, or convert them to multichannel PCM if your receiver lacks the relevant decoding.


Those of you without HDMI-equipped receivers will have to make do with plain old Dolby Digital or DTS from the optical/coaxial digital outputs, as there are no multichannel analogue outputs. But if you want to listen to BonusView audio from any of the digital audio outputs, the LG can also re-encode the primary and secondary audio tracks into a DTS bitstream.

As for sound quality, the LG does a fine job at transferring HD audio bitstreams and converts to PCM without compromising the dynamism of the original soundtrack. ”Spider-Man 3” sounds clean and open, with forthright dialogue and expansive rear effects, plus the big set pieces are breathtaking.


CD playback is fine for everyday use on undemanding systems, and when playing back MP3/WMA files the sound quality is crisp and full bodied. Not only that, but the onscreen menus are also superb, showing the artist, title and bitrate of each track, alongside a superficial-but-snazzy graphic equaliser. 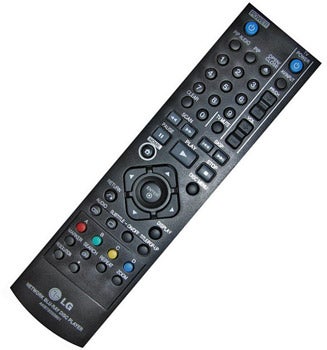 All of the BD370’s options can be access from its wonderful user interface. When you hit the Home button on the remote, you’re presented with a gorgeous main menu, decked out in a bright, vibrant background ‘skin’ that can be changed in the setup menu. In the foreground the different types of media available (Movie, YouTube, Photo and Music) are presented with eye-catching icons. It’s so smooth and slick that you wonder why all Blu-ray manufacturers don’t put this much effort into their GUIs.


The remote is a bit cluttered and most of the buttons are too small for comfort, but once you’ve got used to this it’s generally easy to use. There are buttons covering most of the main functions, allowing you to directly change the output resolution, access the pop-up menu or turn PIP video and audio on and off.

Now let’s cut to the chase and talk about the YouTube functionality, which is a really nifty feature. At first we thought it might be a gimmick with passing appeal, but it turns out to be very addictive and most importantly, a lot of fun. It’s a real novelty being able to watch YouTube videos on our main TV, and the user interface LG has designed for it is fast, simple to use and gloriously attractive. 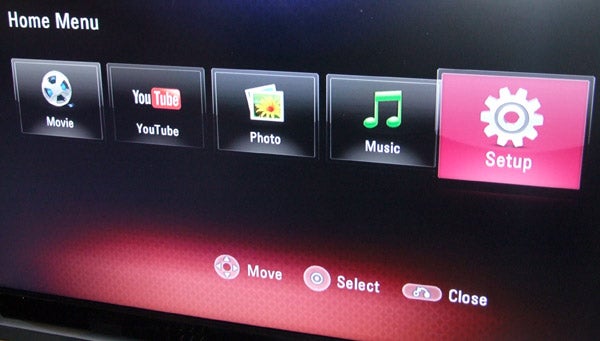 When you hit the YouTube icon in the Home menu, you’re presented with a row of options across the top – Featured, Recent Videos, Most Viewed, Top Rated, as well as a Search option. Select one of these and it presents the videos five at a time, each with a still thumbnail and a few details about the clip. Select one and the video plays in a box about a third of the size of the screen, with the information listed on the right. Buffering times are quick and if you want to expand the image to full screen, simply press Display, and although you can pause or stop clips just like a disc, there’s no scan mode – you can only jump in 30-second chunks using the chapter skip keys. 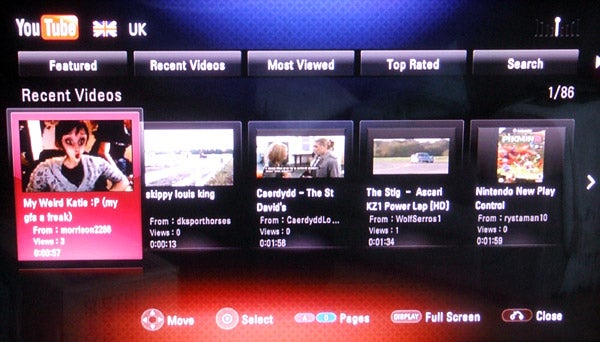 Of course, most people will want to hunt for their own content, and the Search tool allows you to do so. It uses a virtual keyboard, which is obviously a lot slower than using a PC keyboard but works well. Once you’ve punched in your search term it presents the results five at a time, and when you stop the video you get a list of Related Videos, just like on the website. 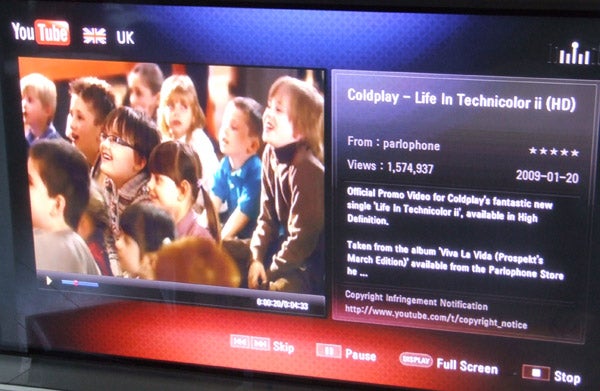 The other features are really useful – you can also narrow the clips down to local sites listed by country (there’s a UK option), plus the deck stores your recently visited sites and allows you to sign in if you have a YouTube account. The only gripe we have is that when expanded to full screen, the picture quality is predictably poor, and the deck doesn’t display hi-def clips in their native resolution – the HD video for Coldplay’s ”Life In Technicolor ii”, for example, is displayed with jagged edges and a generally gauzy effect, but it’s still enjoyable to watch.


When it comes to playing Blu-ray discs, the BD370 boasts lightning-quick boot up and loading times. From standby it takes around 15 seconds to reach the splashscreen, and just 35 seconds to get to ”Spider-Man 3’s” first menu after hitting the ‘Close’ button on the disc tray.

Picture quality is impressive too. With ”Spider-Man 3” it draws out every last detail, from the patterning on Spidey’s costume to the intricate grains on Sandman’s body. This excellent detail handling gives the picture exceptional lucidity and sharpness, which is exactly what you want from a Blu-ray player.

Colour saturation is strong, giving the image a warmth and radiance that works a treat with ”Spider-Man 3’s” vivid visual effects. But it handles the subtler palette of movies like ”The Assassination of Jesse James” with equal aplomb, showing admirable delicacy in reproducing the nuances of skin and clothing. We’re also impressed by the solid blacks and expansive contrast, which prevents dark scenes from looking washed out and indistinct – during Peter and Harry’s fight down the dark alleyways in chapter eight, you never lose track of what’s going on.


Look closely and you can spot some jagged edges on diagonal lines and a pinch of noise here and there but nothing that greatly hampers your enjoyment of the movie. Pricier players like the Pioneer BDP-51FD and Panasonic DMP-BD55 offer more depth and definition but on the whole the LG is a solid performer.

As per usual we slipped in the HQV Benchmark disc, and were really impressed with what we saw – it passes the diagonal filter tests with some remarkably clean edges on the rotating bars, there’s no strobing on the Video Resolution Loss test, and the lack of flickering on the Film Resolution Loss test shows that it’s adept at recognising and correcting the 3:2 cadence of 1080/24p material converted to 1080/60i.


Sadly it’s not quite so impressive at processing DVDs – the HQV DVD shows some serious jaggies on rotating bars and the moving flag clip, but it does a fairly good job with detail reproduction and colours. When playing back a movie DVD like ”Seven”, jaggies and block noise are visible but on the whole the quality is acceptable.


The BD370 is one of the most exciting Blu-ray players to emerge in quite some time. We love the fact that LG is keen to push the technology forward, and the inclusion of YouTube access is no mere gimmick – it provides a worthwhile way of expanding the available content beyond the realms of physical media, and also gives us a tantalising taste of what the future holds for the Blu-ray format. It’s a lot of fun to use and the user interface works brilliantly, although it’s a shame that you can’t watch HD content in its proper form.


But there are many more strings to the BD370’s bow, including terrific Blu-ray picture quality, a superb operating system, BD Live access, terrific multimedia support, zippy loading times and most remarkably, an affordable price tag. We imagine it might be usurped by other players with bigger and better online capabilities later this year, but for now it’s the most advanced Blu-ray deck on the market and we love it.