Back when the Blu-ray vs. HD DVD format war was in full swing, LG sat on the fence by launching a player that spun both formats (the much maligned BD100). But now that the dust has settled, the Korean company has turned its attention to Blu-ray exclusively with the BD300, a modestly-priced but feature-packed player.


But before we get stuck into its features, here’s an interesting little curio – the BD300’s page on LG’s website still shows the HD DVD logo, which makes us think that at some point the BD300 was destined to be another dual-format deck. We can confirm however that it doesn’t play HD DVDs, as demonstrated by its almost violent rejection of our ”V For Vendetta” disc.

Anyway, on with the review. The BD300 boasts full BD Live support, which at this price is not to be sniffed at. It’s soon to be joined by the BD370, which also allows you to connect to YouTube and watch video clips through its Internet connection, and although the US version of the BD300 supports downloads from Netflix, the UK version is currently limited to downloading film extras and the like. The BD300 supports Profile 1.1 BonusView features too, making this deck a wise investment if you’re into bonus features.


The BD300 is a very classy-looking player, with a beautiful translucent fascia and a delectable silver strip running along the top that has the power and open/close buttons embedded into it. The display panel is bright and easy to read, and alongside it is a USB port, which you’ll need if you want to download BD Live content or play MP3, WMA and JPEG files from an external storage device. 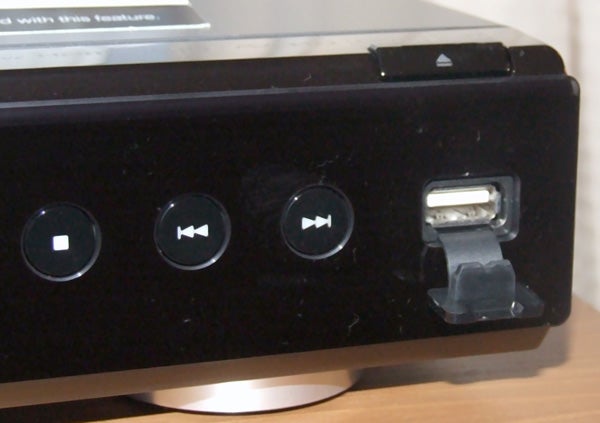 The rear panel is equipped with all the key connections, with the only notable omissions being multichannel analogue outputs, which would have been useful for owners of older amps without HDMI inputs. But it does offer an Ethernet LAN port, the necessary connection for web-enabled features, and an HDMI v1.3 output that supports 1080/24p output and Deep Colour. The inclusion of optical and coaxial digital audio outputs is handy if your amp is limited to one or the other, but the composite video output is about as useful as a paper umbrella. Rounding up the sockets is a set of component video outputs. 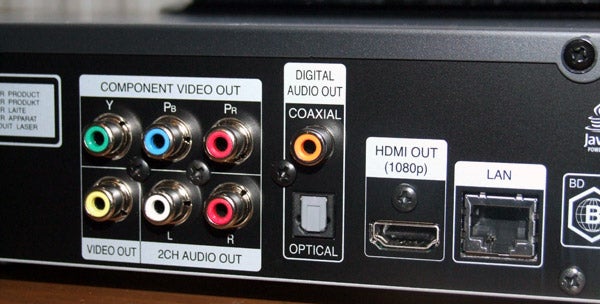 As the lack of multichannel outputs suggests, the LG’s audio talents are fairly limited. On the plus side, it’s able to output Dolby TrueHD and DTS HD Master Audio bitstreams from its HDMI output – great news if your receiver can decode them – but it’s only able to decode Dolby TrueHD and Dolby Digital Plus, which will be a real blow for those with HDMI-equipped receivers without HD audio decoding who want to enjoy the extra resolution offered by DTS HD Master Audio.


Format support is pretty healthy though. Aside from the aforementioned MP3, WMA and JPEG playback, the BD300 also accepts AVCHD and DivX (but sadly not DivX HD like the DVS450H DVD player) as well as spinning BD-RE/BD-R, DVD-RW/-R, DVD+RW/+R and CD-RW/-R discs.

In action the BD300 is a very slick and co-operative machine, boasting stunning onscreen menu presentation imbued with snazzy colours and modern fonts. The focal point for the operating system is the Home menu, which shows you the different types of media available using sharp graphics. The setup menu allows you to make tweaks with consummate ease, but we’re especially impressed by the CD/MP3 playback menus, which display a graphic equaliser during playback.


It’s backed up by a terrific remote that might be big and dull to look at, but the core controls are arranged in a convenient manner and everything is clearly labelled.


The BD300 boots up in less than 20 seconds, and demonstrates the huge strides that have been made in disc loading times since the BD100 was launched. It gets the first menu on the ”Hellboy 2” disc up and running in 32 seconds (slightly slower than the 25 seconds quoted on the LG website but still impressive). ”Spider-Man 3’s” first menu took around 35 seconds to appear. 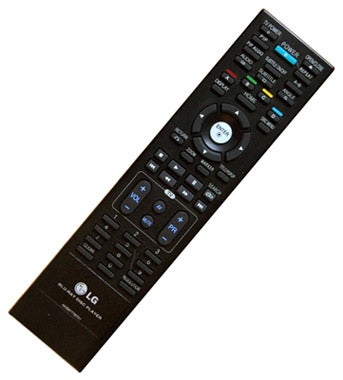 After a run-through of ”Hellboy 2” on Blu-ray on the Toshiba 46ZV555D (running at 24fps), it becomes clear that the LG can deliver some impressive hi-def pictures with movie discs, even if it doesn’t have the prowess to topple the best players in this price range. The difference is apparent from the Troll Market scene, or shots of Prince Nuada working out in the subway towards the beginning – these gloomy scenes aren’t as distinct and well contrasted as we’ve seen them on other players, with some of the background detail getting lost among the shadows. Likewise the scene where Hellboy and the gang battle a swarm of Tooth Fairies, which gets a bit hard to follow at times amid the darkness.


We compared the LG with a few rival Blu-ray decks including the Samsung BD-P1500 and its level of performance is similar, but it’s worth noting that the slightly pricier Panasonic DMP-BD55 and Denon DVD-1800BD handle this disc a lot more convincingly.


But everything else is absolutely on the money. The deck’s detail reproduction really stands out, making the movie’s intricately-crafted sets, costumes and characters look blisteringly sharp and textured – you can even make out the tiny pockmarks on Hellboy’s latex make-up. Its colour handling is also impressive, reproducing Hellboy’s red skin with convincing depth while maintaining a natural tone, plus it conveys the Forest God’s shades of green with irresistible vibrancy.

We also couldn’t discern any motion tracking problems, even when the action gets really frenetic, and it makes a very convincing attempt at delivering a true black. However, when switching to the Silicon Optix HQV Blu-ray disc, the LG’s shortcomings are revealed – it fails the important film resolution test due to some excessive strobing in the corner boxes, while the panning shot of the stadium shows some distinct moiré noise on the upper tier, none of which can be seen on the Panasonic DMP-BD55 or Denon DVD-1800BD. It also turned in an unconvincing performance with the diagonal filtering tests, showing clear jaggies on the edges of the rotating bars.


Switching to the DVD version of Silicon Optix’ HQV disc reveals more problems – the rotating bar not only exhibits jaggies but judders wildly as it spins round, while the fine lines on the colour bars shows minor flickering. It does however perform well with the detail test. Thankfully these weaknesses are harder to spot with subjective movie playback – ”Gladiator” for example looks fine, with forceful edges and distinct, natural colour reproduction, although it could be sharper and there’s more noise in the picture than we would have liked.

Sonically there’s little wrong with the BD300. Feeding a Dolby TrueHD or DTS HD Master Audio bitstream to a compatible receiver delivers the most exhilarating results, particularly with a soundtrack as multilayered and hectic as ”Hellboy 2”. But we were also surprised by how much we enjoyed its CD playback from the analogue outputs – OK it’ll be eaten alive on a serious speaker system, but it sounds great though a modest setup, making the soulful jazz of Incognito’s ”Tales From The Beach” sound polished and well balanced.


The most impressive thing about the BD300 is the amount of features you get for your money, including support for BD Live and a pleasing array of multimedia formats. Also bringing a smile to our chops is its slickness and ease of use, with immaculate onscreen presentation and lightning-quick loading times. It’s only flaws are the lack of DTS HD Master Audio decoding and less-than-perfect picture quality that falls short of the high standards set by other players in its price range. But neither of these is a major crime – overall the BD300 is a great-value Blu-ray proposition which makes up for in features and useability what it lacks in picture prowess.