It seems that 8K is set to dominate the TV discussion at this IFA 2018, And this new breed of incredibly high resolution TVs simply doesn’t get more glamorous than LG’s newly announced (but currently unnamed) 88-inch OLED set.

Taking its design cues from the gorgeous glass frame concept of LG’s current E8 models, the 88-inch screen extends a lovely see-through external frame half an inch or so beyond a narrower black inner frame, to deeply attractive effect. Plus its screen is stunningly slim in that way only OLED screens can be. 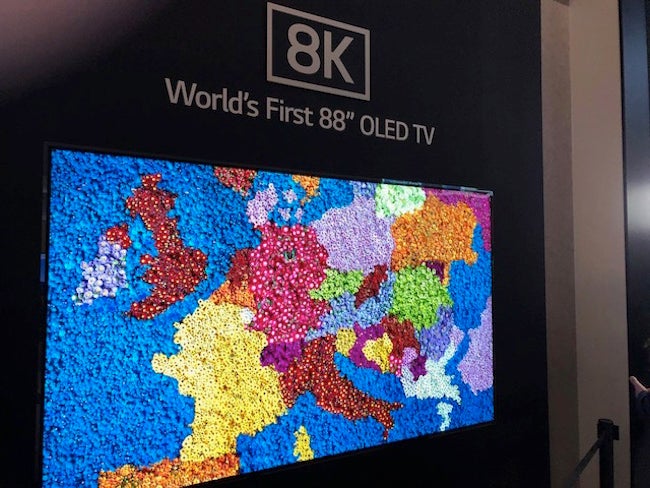 Unlike Samsung, who interestingly focused on upscaled content while demoing the Samsung Q900R, LG was showcasing its 8K OLED exclusively with native 8K content. Given that this required LG to stick with specially shot 8K video clips, it rather exposed the fact that there’s currently no real-world, third party 8K content LG could use.

On the other hand, using 8K sources also let the LG 8K OLED screen really show what 33 million (and more) pixels in a TV screen can do. At their best, the images look truly gorgeous. This is, of course, not unusual for an OLED TV. However, a key component of this particular OLED TV’s gorgeous pictures is the incredible amount of detail they contain.

There’s simply no question that on a screen as big as this one, you can clearly see more details and more textures in an 8K picture than you can in a 4K one. What’s more, I could clearly appreciate this extra detail from a viewing distance of four metres. So the idea that you have to stick your nose right up to an 8K screen to appreciate its extra resolution just doesn’t hold up.

LG was brave enough to including moving 8K video footage as well as static 8K images within its demo reel – something it did not do when showing introducing its 8K concept panel at the CES back in January. I was pleasantly surprised by how well the TV’s extreme resolution held up under the extra stress of having to handle moving elements. 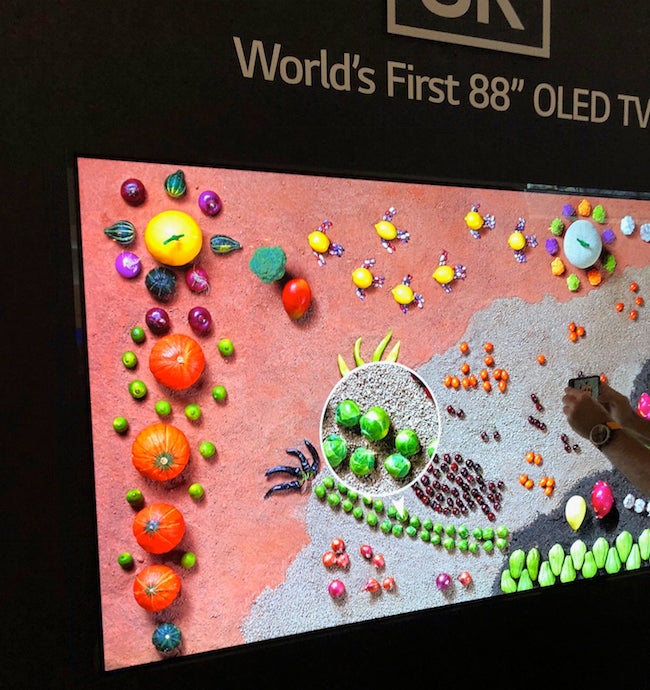 An overhead tracking shot above New York’s Times Square at night, for instance, was particularly striking. It revealed stunning amounts of tiny detailing on the streets far below and in the surrounding buildings and sky line that was essentially unaffected by the blurring or judder issues motion can cause.

In fact, seeing true 8K in motion as well as with static photography emphasises the sense of realism 8K can provide. I used to think that watching 4K felt like looking through a window rather than watching a screen, but watching native 8K video exposes 4K as only a partial step towards images that truly have enough resolution to look ‘real’. At least where large screen sizes are concerned.

I stressed earlier that you do not have to stand unnaturally close to the LG 88-inch 8K OLED TV to appreciate the extra detail 8K can bring. If you DO stick your nose pretty close to the screen, though, it’s much harder to see any physical pixel structure at all in the image than it is on a similarly large 4K TV. And there’s really no jaggedness at all around diagonal and curved object edges, while they’re still quite noticeable on big 4K screens if you get close enough to them.

These strengths all contribute to the intense immediacy and natural presence of the LG 8K OLED’s images from more standard viewing distances. As do LG OLED’s traditional strengths of wide viewing angles, exceptional black levels, and rich colours during dark scenes.

It should be said that some parts of LG’s 8K demo footage were less convincing than others. Shots around a sun-drenched continental town didn’t look nearly as crisp and detailed as most of the rest of the demo real, for some reason. This raises just a hint of concern given that this footage was arguably the most ‘naturally shot’ content in the whole 8K loop.
For the most part, though, LG’s 88-inch 8K IFA TV does enough to at least start the process of convincing a currently sceptical public that 8K is more than just another big number. Though it’s a pity that LG’s inability to hint at any sort of on-sale date, price or even finalised model number for its 8K OLED debutante suggests that the TV is, in reality, still more a ‘because we can’ proof of concept than an imminent consumer option.